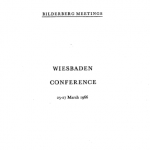 A copy of the conference report for the 1966 Bilderberg Conference held at the Hotel Nassauer Hof in Wiesbaden, Germany. 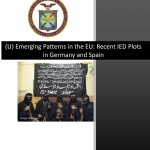 Despite official statistics showing a decrease in the number of arrests related to Salafist-jihadist activity, EU-based security services have thwarted numerous IED-centered plots since 2003. Many of the EU plots involve al Qaeda-networked terrorists in Afghanistan and Pakistan, and included plots in Spain, Germany, Italy, Belgium, and the United Kingdom (UK). Two recent plots are representative of the current IED threat in the EU: the Sauerland plot in Germany (2007) and the Barcelona plot in Spain (2008).

The following leaflets are part of a collection (9.1 MB PDF) held at the U.S. Army Combined Arms Research Library at Fort Leavenworth, Kansas.  The leaflets were distributed to Allied troops in France and Italy from 1944-1945.

A report and presentation compiled by researchers at the Max Planck Institute for Foreign and International Criminal Law regarding controversial police powers recently introduced in the German state of Brandenburg including automated license plate searches, mobile phone localization and access to telecommunications data.

The term “counterinsurgency” (COIN) is an emotive subject in Germany. It is generally accepted within military circles that COIN is an interagency, long-term strategy to stabilise a crises region. In this context fighting against insurgents is just a small part of the holistic approach of COIN. Being aware that COIN can not be achieved successfully by military means alone, it is a fundamental requirement to find a common sense and a common use of terms with all civil actors involved. However, having acknowledged an Insurgency to be a group or movement or as an irregular activity, conducted by insurgents, most civil actors tend to associate the term counterinsurgency with the combat operations against those groups. As a result they do not see themselves as being involved in this fight. For that, espescially in Germany, the term COIN has been the subject of much controversy.

Social broadcasting — posting or sending audio and video content to members of a social network — allows people to share multimedia material using Internet-based technologies. In Germany, OSC has observed that major political parties — hesitant to campaign on the Internet for fear of losing control over their messages — have nevertheless begun to use Internet social networks and video portals as a communication tool. New smaller parties without an established financial or voter base also appear to prioritize Internet-based campaigning. For example, Germany’s Pirate Party won a better-than-expected 2% in the 2009 national election primarily through making use of Internet-based communications.

The blogs selected and profiled in this guide are, at the time of this report, among the most well-known German-language political blogs and were selected for inclusion based on an assessment of several indicators, which are detailed in the methodology statement. The blogs profiled here are among Germany’s most influential independent political blogs and therefore have some potential to shape public opinion and debate on political issues in Germany. However, it should be noted that, given the challenges in establishing linkage between online content and realworld interactions and events, the degree of influence of blogs is difficult to quantify.

* Russia could turn bad and still has a lot of nonstrategic nuclear weapons
* Symbol of continued U.S. commitment to NATO: provides trans-Atlantic glue
* Other countries on NATO’s southern periphery are developing weapons of mass destruction