The following report on the Boston Marathon bombings in April 2013 was declassified and released by the House Homeland Security Committee on March 26, 2014. 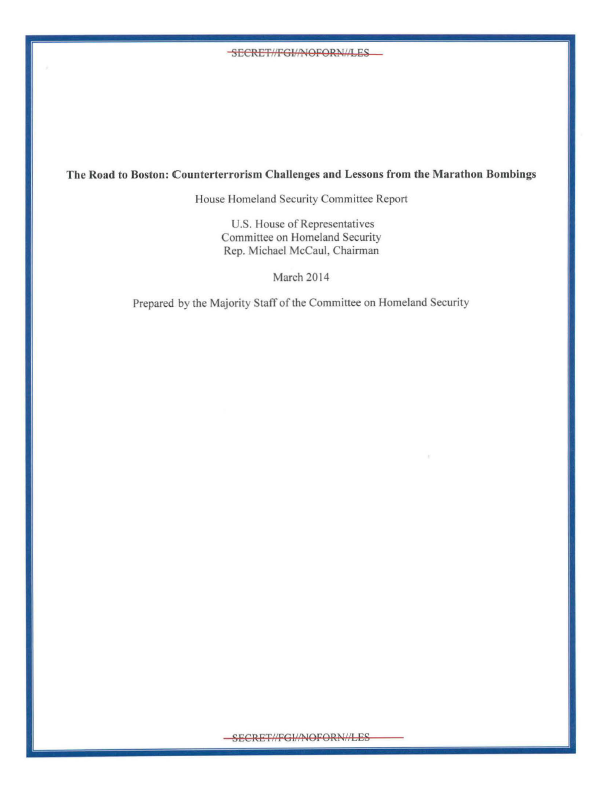 The Road to Boston: Counterterrorism Challenges and Lessons from the Marathon Bombings

(U) This report examines much of Tamerlan Tsarnaev’s personal history and his interaction with Federal agencies, including his radicalization, the 2011 threat assessment carried out by the FBI, and his travel to Russia in early 2012. Additionally, the Committee explores missed opportunities that potentially could have prevented this attack.

(U) Many of the Committee’s recommendations, along with a recommendation to strengthen Congressional oversight of homeland security, echo recommendations included in the 9/11 Commission Report released on July 26, 2004, and are also found in other examinations of terrorist attacks, such as the Senate Homeland Security and Governmental Affairs Committee’s review of the Fort Hood shooting. This once again demonstrates that nearly ten years after the release of the findings of the 9/ 11 Commission, we have yet to fully address these challenges.

(U) The Committee recommends greater information sharing with local law enforcement, and expanded access to the FBI’s classified Guardian system at State and local fusion centers. In particular, the Committee notes that Joint Terrorism Task Forces (JTTFs) around the country must allow for greater sharing with local police departments and other agencies that sponsor personnel to work on the task forces. The Committee also recommends that the Memoranda of Understanding between the FBI and other agencies that prevent the sharing of information outside of JTTFs without FBI approval be amended to foster greater sharing.

(U) In addition to specific policy changes such as those outlined above, the report also identifies broader weaknesses stemming from issues such as public awareness of terrorist threats and government-wide accountability. To address these, the Committee recommends improving upon programs designed to educate the public about terrorist threats and their role in assisting authorities in identifying and mitigating potential dangers.

(U) Finally, the Committee recommends that investigators, analysts, intelligence and law enforcement professionals, and all those charged with guarding the nation’s security, continually find new ways to proactively improve our homeland security. Though difficult to implement, these last two recommendations are perhaps the most important, and the most likely to prevent terrorist attacks in the future. It is difficult to build and evaluate public service and information campaigns, but often., it is the public that is first to notice indicators of an individual’s radicalization., plans to commit a terrorist attack, or other signs of danger. It is perhaps even more difficult to build a self-critical bureaucracy, and improve the efficacy of examinations into terror attacks. However, recognizing the limitations of Federal agencies in mitigating terrorist threats is the first step to improving our efforts.

(U) The Committee hopes these recommendations strengthen the hand of Federal, State and local law enforcement, as well as the Intelligence Community, in combating terrorist threats. Though it will never be realistic to expect we can eradicate the threat posed by terrorist networks and the danger of homegrown extremists, the United States should always endeavor to improve our security and these recommendations are a step in that direction.