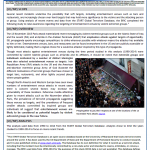 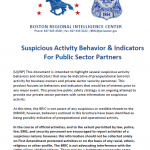 This document is intended to highlight several suspicious activity behaviors and indicators that may be indicative of preoperational terrorist activity for business owners and private sector security personnel. This product focuses on behaviors and indicators that would be of interest prior to any major event. This proactive public safety strategy is an ongoing attempt to provide our private sector partners with some information on suspicious activity. 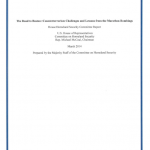 This report examines much of Tamerlan Tsarnaev’s personal history and his interaction with Federal agencies, including his radicalization, the 2011 threat assessment carried out by the FBI, and his travel to Russia in early 2012. Additionally, the Committee explores missed opportunities that potentially could have prevented this attack.

More than a dozen images originally published on the website Кавказская политика Kavkazskaya Politika (Politics of the Caucasus) after being displayed at a press conference held in Moscow by Ibragim Todashev’s father Abdul-Baki Todashev on May 30, 2013. Ibragim Todashev was shot seven times in his Orlando, Florida apartment on May 22, 2013 following eight hours of questioning by an FBI Special Agent from the Boston Field Office and at least one Massachusetts State Police trooper. Law enforcement sources have provided media outlets with several differing versions of the events leading up to Todashev’s death. First, sources described Todashev being shot after he reportedly attacked the FBI agent with a knife. In later accounts, Todashev was described as being unarmed. In the most recent version of events Todashev reportedly overturned a table, knocking the FBI agent to the ground, before lunging at the agent with a pole or broomstick.

This Joint Intelligence Bulletin provides law enforcement and private sector safety officials with protective measures in light of the recent explosions that took place at the 2013 Boston Marathon in Boston, Massachusetts. The information is provided to support the activities of DHS and FBI and to assist federal, state, local, tribal, and territorial government counterterrorism and first responder officials and the private sector to deter, prevent, preempt, or respond to terrorist attacks in the United States.

This Joint Intelligence Bulletin provides information on the devices used in the 15 April 2013 Boston Marathon explosions. The information is intended to provide aid in identifying devices and to support the activities of DHS and FBI and to assist federal, state, local, tribal, and territorial government counterterrorism and first responder officials and the private sector to deter, prevent, preempt, or respond to terrorist attacks in the United States.

The following series of photos was taken by Paul Weiskel at the Boston Commons on April 15, 2012.  The photos depict a Boston Police Department patrolman identified as Vaden Scantlebury who grabs a protester by the neck and then becomes…

The full text version of a notice first tweeted, then physically handed out to protesters at the Occupy Boston Rally reminding them that the Boston Police Department “Respects Your Right to Peacefully Protest.” The note should be juxtaposed against the events which later transpired, including a large number of arrests well documented in photos and video.

There have been several reports of counterfeit money being passed around the City of Boston since the beginning of December 2008. In the majority of incidents, counterfeit $20 dollar bills were used, but $10, $50 and $100 dollar bills have been used on occasion. The most frequent recipient of these counterfeit bills have been Taxi/ Livery drivers, restaurants and bars in the Dorchester (C11), South Boston (C6), Roxbury (B2) and Jamaica Plain (E13) areas. Boston Police, in conjunction with the United States Secret Service made an arrest on 2/3/09 of an individual that may be responsible for some of the counterfeit currency being passed around (CC# 090061459). Below please find a list of serial numbers that have been used in more than one incident, as well as a list of serial numbers used since 12/12/08.