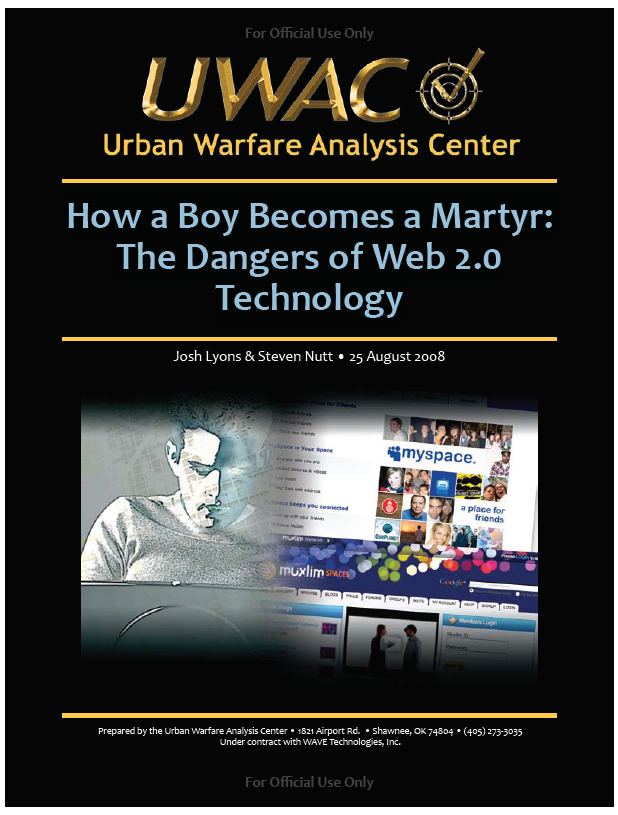 Pete is a 16-year-old boy in Detroit who is moody and depressed. He lacks a stable home life, is
socially awkward at school, and has no clear direction in life. Like many teens around the world,
he finds solace in friendships made online through social networking sites.

Pete has created a homepage on MySpace. Part of his story of angst is laid out on his
personal profile, along with his location and contact information. A young man in Lebanon
named Jafar sees Pete’s profile and sends out a “friend request,” which Pete accepts. Now that
Pete and Jafar are identified as friends on MySpace, they can view each other’s private pages.
Jafar learns about the details of Pete’s anger and frustration. Pete, in turn, reads about Jafar
and becomes “linked up” with Jafar’s network of friends. This is Pete’s first introduction to the
world of Islam.

Now armed with an arsenal of contacts from across the Middle East, Pete becomes enlightened
by Islam. He reads voraciously about a father figure in the Prophet Muhammad that he
desperately craves. He is encouraged by his many new friends, although most of those “friends”
are simply Jafar using multiple MySpace pages. Pete learns that converting to Islam is easy
and that he can advance to a higher “stage” in the online community by doing so. He eagerly
converts.

Pete is then directed by his MySpace friends, many of them real people now, to join a new social
network called MuxlimSpaces created exclusively for Muslims. Pete creates a member profile
on MuxlimSpaces. All of his Muslim friends have similar profiles, and Pete gains a multitude of
new Islamic friends from around the world.

With an ever-increasing Muslim influence surrounding him and a welcome sense of direction,
Pete feels at home within his new Muslim community. Pete still has never met another Muslim
in person, but he socializes with his friends for hours online everyday. His family and few
acquaintances at school are unaware of this burgeoning development in his life.

Pete is already familiar with Second Life – a virtual world social networking application –
and he explores its Muslim areas. He has created an avatar, which is a computer-generated
representation of himself. He makes himself look like someone from the Middle East with
dark skin and stylish clothes. He is empowered by his new look. He locates his pal Jafar inside
the virtual world. Jafar directs Pete to an island within Second Life built by the pro-Hamas
organization IslamOnline.net.

One day during a casual tour of a Muslim museum, he overhears two of his Muslim friends
talking via their avatars inside Second Life. As he approaches, he hears one of the avatars
describe the joy he has felt since he joined the jihad. As Pete approaches, the two friends quickly
change the conversation and hint that Pete is not ready for this “higher level” of Islam. Pete
quickly contacts Jafar and asks about jihad. Pete was unaware that Jafar was one of the two
avatars Pete overheard.

Since social networking inside Second Life is mostly unregulated and can be largely anonymous,
Pete feels comfortable openly expressing his desire to learn more about jihad with his online
friends. Some urgently try to dissuade Pete from pursuing it, but others quickly suggest that
those avatars “lack the courage” to serve Allah with their whole hearts. Pete thinks to himself
that he is not afraid. He also secretly longs for the promise of sexual bliss in heaven sworn to
those who support jihad.

Weeks go by and Jafar encourages Pete to take full advantage of all the opportunities for
Muslims inside Second Life. Pete joins others and participates in a Virtual Hajj to Mecca,
complete with real-life replicas of the Ka’ba and the Mosque of the Prophet Muhammad. He
also prays with millions of other avatars in what proves to be a formative experience for him.
He is unaware that all but a few of the avatars are computer controlled and do not represent real
people.

Upon his “return” from Mecca, Pete is told by Jafar to visit the Palestinian Holocaust Memorial
Museum inside Second Life. Pete is enraged by what he sees at the museum. He is bombarded
by images of Palestinian martyrs “murdered” by Israeli soldiers. He also finds links to YouTube
pages that contain Hamas and Hezbollah propaganda and martyrdom videos. This ignites his
hatred for Israel and solidifies his desire for jihad.

Through his online social networking connections, Pete becomes acquainted with radical
jihadists living outside Detroit in a mostly Arab community. Some of these friends are aligned
with Hamas and Hezbollah. Pete secretly meets the “brother” of Jafar, Abdul, at a fast food
restaurant near Abdul’s house. Pete is energized by this secret rendezvous and admires the
maturity and faith of Abdul. Pete has lost touch with his few friends at school now and
welcomes this new relationship. He frequently skips school to spend time with Abdul.

One day inside Second Life, Jafar indicates that the best way for Abdul and Pete to serve the
Prophet Muhammad and spread his message of truth is to carry out an attack locally. Pete is
shocked and hesitant at first, but Abdul quickly tells him that Jafar picked him number one out
of 1,000 new Muslims. Abdul even expresses disappointment that he was not picked because he
has been trying for many years. Pete feels like a champion. He finally won at something.
Meanwhile, the local professional basketball team is winning many games and attracting large
crowds. Their schedule is also posted on the team’s website. The target for the attack is now
selected: a packed house at an upcoming home game.

The team’s management has posted a video tour of its newly renovated arena on its website.
Jafar studies it carefully. He also finds an exact three-dimensional virtual blueprint of the new
arena inside Second Life provided by a group of rabid fans boasting about the new facilities.
Jafar organizes a meeting with several key colleagues at a private island inside Second Life.
They carefully review videos, photos, and descriptions of the building and surrounding area to
conduct virtual reconnaissance of the arena. Jafar takes advantage of a virtual ticket booth on
the island to purchase tickets to the game. Jafar, Abdul, and others “walk around” the arena and
discuss details of the attack.

Pete, Abdul, and another “winner” selected by Jafar rehearse the attack inside Second Life. They
conduct the attack over 200 times using different scenarios based on pedestrian traffic patterns,
guard patrols, and police video surveillance – all available online.

The team’s management has decided to heighten the number of security personnel for the game,
expecting unruly crowds should the home team lose to its bitter rival. Abu Rashid, one of the
local jihadists, obtains a temporary job as a security guard for the event. The plan is for Abu
Rashid to facilitate Pete’s entrance into the back of the arena to avoid the metal detectors and
body searches.

On the day of the game, Pete goes to Abdul’s house where Jafar leads Pete to a secret location
inside Second Life. Pete is welcomed as a champion by what seems like thousands of Muslims.
Pete is unaware that all the avatars are computer controlled by Jafar. Pete proceeds to view a
series of martyrdom videos. Abdul repeatedly says that he wishes he had been picked. They
also talk about the beautiful women in heaven reserved for martyrs. Abdul hints to Pete that they
cannot be friends any longer should Pete abort the mission.

Abdul straps on the martyr vest and Pete effortlessly enters the arena via Abu Rashid’s gate for
delivery trucks. He takes his seat at midcourt and stares blankly ahead. Just after the opening
tip off, Pete rises and screams, “Allahu Akbar!”1 He detonates the vest. The explosion kills
everyone within a 30-foot radius. Chaos ensues as spectators run for the exits.

Suddenly, five other blasts destroy other parts of the building and kill dozens more. Unknown
to Pete and Abdul, Jafar had arranged for three other teams from a local jihadist cell to plant
explosives. They had all used separate sites inside Second Life to plan the attack. Only Jafar
knew the entire plan.

The next day, Jafar places images and text of the event on YouTube and at sites inside Second
Life. His version glorifies the martyrs and describes in detail the rewards for the martyrs in
heaven. Pete is never mentioned by name. A fictitious martyrdom memorial is created inside
Second Life to honor the martyrs, whose names and backgrounds are changed to suggest they
were heroes of exceptional character.

One week later, Jafar and several associates meet inside Second Life to review all stages of the
attack. They study many hours of film footage on police actions provided by national news
stations. At the same time, Jafar notices a new avatar in Second Life that has taken a particular
interest in Pete’s story. His MySpace profile states that he is a 15-year-old male from
California named Tom…