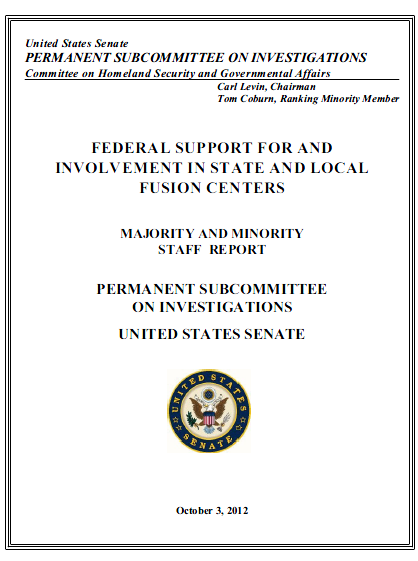 Sharing terrorism-related information between state, local and federal officials is crucial to protecting the United States from another terrorist attack. Achieving this objective was the motivation for Congress and the White House to invest hundreds of millions of taxpayer dollars over the last nine years in support of dozens of state and local fusion centers across the United States.

The Subcommittee investigation found that DHS-assigned detailees to the fusion centers forwarded “intelligence” of uneven quality – oftentimes shoddy, rarely timely, sometimes endangering citizens’ civil liberties and Privacy Act protections, occasionally taken from already-published public sources, and more often than not unrelated to terrorism. Congress directed the Department of Homeland Security (DHS) to lead this initiative. A bipartisan investigation by the Permanent Subcommittee on Investigations has found, however, that DHS’ work with those state and local fusion centers has not produced useful intelligence to support federal counterterrorism efforts.

Since 2003, over 70 state and local fusion centers, supported in part with federal funds, have been created or expanded in part to strengthen U.S. intelligence capabilities, particularly to detect, disrupt, and respond to domestic terrorist activities. DHS’ support for and involvement with these state and local fusion centers has, from the beginning, centered on their professed ability to strengthen federal counterterrorism efforts.

• Nearly a third of all reports – 188 out of 610 – were never published for use within DHS and by other members of the intelligence community, often because they lacked any useful information, or potentially violated department guidelines meant to protect Americans’ civil liberties or Privacy Act protections.
• In 2009, DHS instituted a lengthy privacy and civil liberties review process which kept most of the troubling reports from being released outside of DHS; however, it also slowed reporting down by months, and DHS continued to store troubling intelligence reports from fusion centers on U.S. persons, possibly in violation of the Privacy Act.
• During the period reviewed, DHS intelligence reporting suffered from a significant backlog. At some points, hundreds of draft intelligence reports sat for months before DHS officials made a decision about whether to release them to the intelligence community. DHS published many reports so late – typically months late, but sometimes nearly a year after they were filed – that many were considered “obsolete” by the time they were released.
• Most reporting was not about terrorists or possible terrorist plots, but about criminal activity, largely arrest reports pertaining to drug, cash or human smuggling.
• Some terrorism-related “intelligence” reporting was based on older news releases or media accounts.
• Some terrorism-related reporting also appeared to be a slower-moving duplicate of information shared with the National Counter Terrorism Center through a much quicker process run by the Federal Bureau of Investigation’s Terrorist Screening Center.

The Subcommittee investigation also reviewed how the Federal Emergency Management Agency (FEMA), a component of DHS, distributed hundreds of millions of taxpayer dollars to support state and local fusion centers. DHS revealed that it was unable to provide an accurate tally of how much it had granted to states and cities to support fusion centers efforts, instead producing broad estimates of the total amount of federal dollars spent on fusion center activities from 2003 to 2011, estimates which ranged from $289 million to $1.4 billion.

The Subcommittee conducted a more detailed case study review of expenditures of DHS grant funds at five fusion centers, all of which lacked basic, “must-have” intelligence capabilities, according to assessments conducted by and for DHS. The Subcommittee investigation found that the state and local agencies used some of the federal grant money to purchase:

• dozens of flat-screen TVs;
• Sport Utility Vehicles they then gave away to other local agencies; and
• hidden “shirt button” cameras, cell phone tracking devices, and other surveillance equipment unrelated to the analytical mission of a fusion center.

All of those expenditures were allowed under FEMA’s rules and guidance, DHS officials told the Subcommittee. Yet none of them appeared to have addressed the deficiencies in the centers’ basic information analysis and sharing capabilities, so they could better contribute to federal counterterrorism efforts.

IV. DHS SUPPORT FOR AND INVOLVEMENT IN STATE AND LOCAL FUSION CENTERS DOES NOT GENERATE TIMELY, USEFUL INTELLIGENCE FOR FEDERAL COUNTERTERRORISM EFFORTS

• Reporting from fusion centers was often flawed, and unrelated to terrorism.
• Some reports had “nothing of value.”
• If published, some draft reporting could have violated the Privacy Act.
• Most fusion center reporting related to drug smuggling, alien smuggling or other criminal activity.
• Terrorism-related reporting was often outdated, duplicative and uninformative.
• DHS intelligence reporting officials who repeatedly violated guidelines faced no sanction.
• DHS did not sufficiently train its fusion center detailees to legally and effectively collect and report intelligence.
• Short-staffing and reliance on contract employees hampered reporting efforts.
• Reporting officials aren’t evaluated on the quality of their reporting.
• A hastily-implemented and poorly coordinated review process delayed reporting by months.
• Retaining inappropriate records is contrary to DHS policies and the Privacy Act.
• Problems with DHS reporting are acknowledged, but unresolved