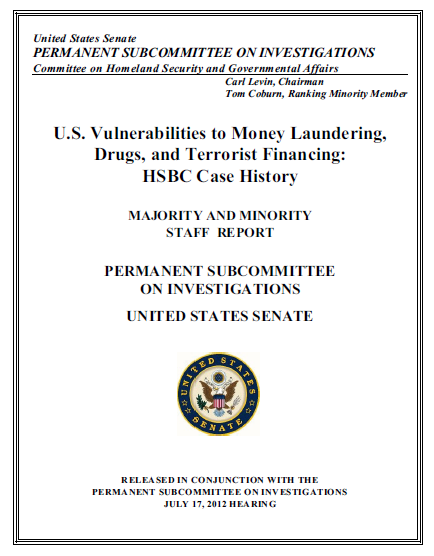 HSBC Case Study. To examine the current money laundering and terrorist financing threats associated with correspondent banking, the Subcommittee selected HSBC as a case study. HSBC is one of the largest financial institutions in the world, with over $2.5 trillion in assets, 89 million customers, 300,000 employees, and 2011 profits of nearly $22 billion. HSBC, whose initials originally stood for Hong Kong Shanghai Banking Corporation, now has operations in over 80 countries, with hundreds of affiliates spanning the globe. Its parent corporation, HSBC Holdings plc, called “HSBC Group,” is headquartered in London, and its Chief Executive Officer is located in Hong Kong.

Its key U.S. affiliate is HSBC Bank USA N.A. (HBUS). HBUS operates more than 470 bank branches throughout the United States, manages assets totaling about $200 billion, and serves around 3.8 million customers. It holds a national bank charter, and its primary regulator is the U.S. Office of the Comptroller of the Currency (OCC), which is part of the U.S. Treasury Department. HBUS is headquartered in McLean, Virginia, but has its principal office in New York City. HSBC acquired its U.S. presence by purchasing several U.S. financial institutions, including Marine Midland Bank and Republic National Bank of New York. A senior HSBC executive told the Subcommittee that HSBC acquired its U.S. affiliate, not just to compete with other U.S. banks for U.S. clients, but primarily to provide a U.S. platform to its non-U.S. clients and to use its U.S. platform as a selling point to attract still more non-U.S. clients. HSBC operates in many jurisdictions with weak AML controls, high risk clients, and high risk financial activities including Asia, Middle East, and Africa. Over the past ten years, HSBC has also acquired affiliates throughout Latin America. In many of these countries, the HSBC affiliate provides correspondent accounts to foreign financial institutions that, among other services, are interested in acquiring access to U.S. dollar wire transfers, foreign exchange, and other services. As a consequence, HSBC’s U.S. affiliate, HBUS, is required to interact with other HSBC affiliates and foreign financial institutions that face substantial AML challenges, often operate under weaker AML requirements, and may not be as familiar with, or respectful of, the tighter AML controls in the United States. HBUS’ correspondent services, thus, provide policymakers with a window into the vast array of money laundering and terrorist financing risks confronting the U.S. affiliates of global banks.

Disregarding Links to Terrorism. For decades, HSBC has been one of the most active global banks in the Middle East, Asia, and Africa, despite being aware of the terrorist financing risks in those regions. In particular, HSBC has been active in Saudi Arabia, conducting substantial banking activities through affiliates as well as doing business with Saudi Arabia’s largest private financial institution, Al Rajhi Bank. After the 9-11 terrorist attack in 2001, evidence began to emerge that Al Rajhi Bank and some of its owners had links to financing organizations associated with terrorism, including evidence that the bank’s key founder was an early financial benefactor of al Qaeda. In 2005, HSBC announced internally that its affiliates should sever ties with Al Rajhi Bank, but then reversed itself four months later, leaving the decision up to each affiliate. HSBC Middle East, among other HSBC affiliates, continued to do business with the bank.

Due to terrorist financing concerns, HBUS closed the correspondent banking and banknotes accounts it had provided to Al Rajhi Bank. For nearly two years, HBUS Compliance personnel resisted pressure from HSBC personnel in the Middle East and United States to resume business ties with Al Rajhi Bank. In December 2006, however, after Al Rajhi Bank threatened to pull all of its business from HSBC unless it regained access to HBUS’ U.S. banknotes program, HBUS agreed to resume supplying Al Rajhi Bank with shipments of U.S. dollars. Despite ongoing troubling information, HBUS provided nearly $1 billion in U.S. dollars to Al Rajhi Bank until 2010, when HSBC decided, on a global basis, to exit the U.S. banknotes business. HBUS also supplied U.S. dollars to two other banks, Islami Bank Bangladesh Ltd. and Social Islami Bank, despite evidence of links to terrorist financing. Each of these specific cases shows how a global bank can pressure its U.S. affiliate to provide banks in countries at high risk of terrorist financing with access to U.S. dollars and the U.S. financial system.

This Report makes the following findings of fact.

(2) Taking on High Risk Affiliates. HBUS failed to assess the AML risks associated with HSBC affiliates before opening correspondent accounts for them, failed to identify high risk affiliates, and failed for years to treat HBMX as a high risk accountholder.

(3) Circumventing OFAC Prohibitions. For years in connection with Iranian U-turn transactions, HSBC allowed two non-U.S. affiliates to engage in conduct to avoid triggering the OFAC filter and individualized transaction reviews. While HBUS insisted, when asked, that HSBC affiliates provide fully transparent transaction information, when it obtained evidence that some affiliates were acting to circumvent the OFAC filter, HBUS failed to take decisive action to confront those affiliates and put an end to conduct which even some within the bank viewed as deceptive.

(5) Clearing Suspicious Bulk Travelers Cheques. In less than four years, HBUS cleared over $290 million in sequentially numbered, illegibly signed, bulk U.S. dollar travelers cheques for Hokuriku Bank, which could not explain why its clients were regularly depositing up to $500,000 or more per day in U.S. dollar travelers cheques obtained in Russia into Japanese accounts, supposedly for selling used cars; even after learning of Hokuriku’s poor AML controls, HBUS continued to do business with the bank.

(7) Allowing AML Problems to Fester. The OCC allowed HBUS’ AML deficiencies to fester for years, in part due to treating HBUS’ AML problems as consumer compliance matters rather than safety and soundness problems, failing to make timely use of formal and informal enforcement actions to compel AML reforms at the bank, and focusing on AML issues in specific HBUS banking units without also viewing them on an institution-wide basis.