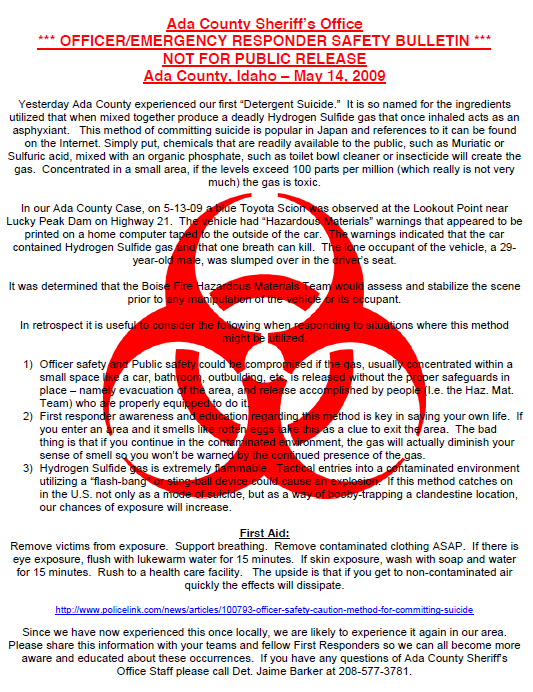 Yesterday Ada County experienced our first “Detergent Suicide.” It is so named for the ingredients utilized that when mixed together produce a deadly Hydrogen Sulfide gas that once inhaled acts as an asphyxiant. This method of committing suicide is popular in Japan and references to it can be found on the Internet. Simply put, chemicals that are readily available to the public, such as Muriatic or Sulfuric acid, mixed with an organic phosphate, such as toilet bowl cleaner or insecticide will create the gas. Concentrated in a small area, if the levels exceed 100 parts per million (which really is not very much) the gas is toxic.

In our Ada County Case, on 5-13-09 a blue Toyota Scion was observed at the Lookout Point near Lucky Peak Dam on Highway 21. The vehicle had “Hazardous Materials” warnings that appeared to be printed on a home computer taped to the outside of the car. The warnings indicated that the car contained Hydrogen Sulfide gas and that one  breath can kill. The lone occupant of the vehicle, a 29-year-old male, was slumped over in the driver’s seat.

It was determined that the Boise Fire Hazardous Materials Team would assess and stabilize the scene
prior to any manipulation of the vehicle or its occupant.

In retrospect it is useful to consider the following when responding to situations where this method
might be utilized.

1) Officer safety and Public safety could be compromised if the gas, usually concentrated within a
small space like a car, bathroom, outbuilding, etc. is released without the proper safeguards in
place – namely evacuation of the area, and release accomplished by people (I.e. the Haz. Mat.
Team) who are properly equipped to do it.

2) First responder awareness and education regarding this method is key in saving your own life. If
you enter an area and it smells like rotten eggs take this as a clue to exit the area. The bad
thing is that if you continue in the contaminated environment, the gas will actually diminish your
sense of smell so you won’t be warned by the continued presence of the gas.

3) Hydrogen Sulfide gas is extremely flammable. Tactical entries into a contaminated environment
utilizing a “flash-bang” or sting-ball device could cause an explosion. If this method catches on
in the U.S. not only as a mode of suicide, but as a way of booby-trapping a clandestine location,
our chances of exposure will increase.

Remove victims from exposure. Support breathing. Remove contaminated clothing ASAP. If there is
eye exposure, flush with lukewarm water for 15 minutes. If skin exposure, wash with soap and water
for 15 minutes. Rush to a health care facility. The upside is that if you get to non-contaminated air
quickly the effects will dissipate.