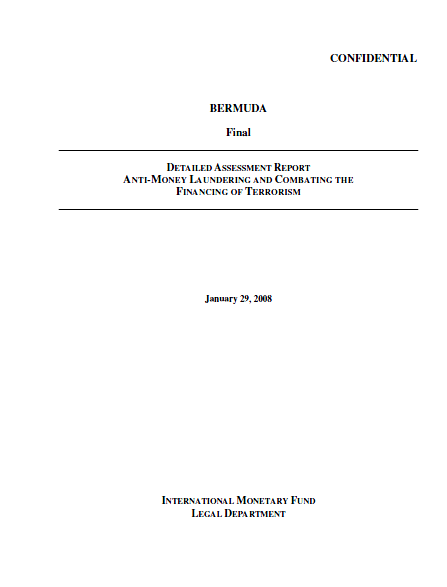 This assessment of the anti-money laundering (AML) and combating the financing of terrorism (CFT) regime of Bermuda is based on the Forty Recommendations 2003 and the Nine Special Recommendations on Terrorist Financing 2001 of the Financial Action Task Force (FATF).  It was prepared using the AML/CFT assessment Methodology 2004, as updated in June 2006. The assessment team considered all the materials supplied by the authorities, the information obtained on-site during their mission from May 7 to 23, 2007, and other information subsequently provided by the authorities soon after the mission. During the mission, the assessment team met with officials and representatives of all relevant government agencies and the private sector. A list of the bodies met is set out in Annex 1 to the detailed assessment report.

The assessment was conducted by a team of assessors composed of staff of the International
Monetary Fund (IMF) and three expert(s) acting under the supervision of the IMF. The evaluation
team consisted of: Manuel Vasquez (LEG, team leader and financial sector expert); Antonio
Hyman-Bouchereau (LEG, legal expert); Ross Delston (legal expert under LEG supervision,
lawyer); and John Abbott (expert under LEG supervision, Designated Non-Financial Businesses
and Professions) (DNFBP). The assessors reviewed the institutional framework, the relevant
AML/CFT laws, regulations, guidelines and other requirements. The mission also reviewed the
regulatory and other institutional systems in place to counter money laundering (ML) and the
financing of terrorism (FT) through financial institutions (FIs) and DNFBP. The assessors also
examined the capacity, implementation, and effectiveness of all these systems.

This report provides a summary of the AML/CFT measures in place in Bermuda at the time
of the mission and shortly thereafter. It describes and analyzes those measures, sets out Bermuda’s
levels of compliance with the FATF 40+9 Recommendations (see Table 1) and provides
recommendations on how certain aspects of the system could be strengthened (see Table 2). The
report was produced by the IMF as part of the assessment of Bermuda under the Offshore Financial
Center Assessment Program (OFC). It was presented to the Caribbean Financial Action Task Force
(CFATF) and endorsed by this organization at ministerial meeting in November, 2007.

9. The scope of the AML regulatory framework does not address CFT issues, and does
not cover key areas of the financial sector, including life insurance business and certain
elements of the investment/mutual funds sector. The lack of coverage in these areas constitutes
an important deficiency in Bermuda’s AML/CFT regime, particularly in light of its role in the
international financial system, even though life insurance does not account for the largest share of
this sector. The POC Regulations and GNs remain practically unchanged since the last IMF
assessment mission in 2003; this in spite of the weaknesses previously identified, a major upgrade of the international AML/CFT standards in 2003, and continued growth in the financial services
industry. At the time of the mission, the authorities had prepared draft new Regulations and were
contemplating amending the GNs, pending passage of proposed new legislation that was passed
subsequent to the mission in June 2007.

337. Inhibition of Implementation of FATF Recommendations (c. 4.1): Bermuda has no general statutory law on secrecy other than with respect to the regulatory laws discussed below and the common law
principles of confidentiality that apply to the customers of banks and other FIs. The authorities have cited the leading precedent on confidentiality, an English Court of Appeal case, Tournier v. National Provincial and Union Bank of England [1924] 1KB461 which, according to a leading text on the issue, held that – “. . . a bank owes to its customer an implied contractual duty to keep his affairs secret, but that the duty is qualified. The duty arises at the commencement of the relationship and continues after the customer has closed his account in relation to information gained during the period of the account. It covers information about the customer’s affairs gained by virtue of the banking relationship and is not limited to information from or about the account itself.”

338. There are four qualifications, or exceptions to this duty:

339. According to the authorities, Bermudian case law has followed this precedent, one example being Brian Lines v. Lines Overseas Management Ltd. [2006] Bda LR 43, 236, at 242.

340. The exception relating to disclosure under compulsion by law is embodied in a number of places in Bermudian statutory law. All of the five regulatory laws (the only exception being the MSB Regulations)
provide for confidentiality of information with gateways to the authorities. The Banks and Deposit Companies Act 1999 is typical: Section 52(1) provides that “no person who under or for the purposes of this Act receives information relating to the business or other affairs of any person; and . . . no person who obtains such information directly or indirectly from a person who has received it as aforesaid, shall disclose the information without the consent of the person to whom it relates and (if different) the person from whom it was received as aforesaid.” Disclosure of information in contravention of the statute is a criminal offense with penalties of up to $100,000 and five years imprisonment or both, under Section 52(3). Subsequent sections have a series of gateways allowing disclosure of information to the BMA, the Minister of Finance, the DPP and police, as well as disclosures by them to foreign authorities. See Sections 53 – 55. See also Sections 52, 52A, 52B, 52C of the Insurance Act 1978, Sections 78 – 81 of the Investment Business Act 2003, Sections 68 – 71 of the Investment Funds Act 2006, and Sections 48 – 51 of the Trusts (Regulation of Trust Business) Act 2003.

341. However, there is no explicit gateway in any of these laws for disclosures to the FIA, since it was not in existence at the time those laws were enacted and therefore consideration should be given to remedying this deficiency by amending relevant laws.

Customer identification for one-off transactions below the equivalent of US$10,000 (BD$10,000) are not covered by CDD (identification) requirements in the regulations or otherwise. Consequently, wire transfers between the equivalent of US$1,000 and US$9,999 are not subject to customer identification requirements and hence FIs are not required to obtain and maintain full originator information. For wire transactions above US$10,000, the non-mandatory Guidance Notes (G94 to G98) set out the type of detail records that should be maintained to identify a customer, but do not specify such details to include account numbers, address or other substitute information as allowed for by SRVII. G98 only states that FIs should retain records of electronic payments with “sufficient detail” to enable them to establish the identity of the remitting customer and as far as
possible the identity of the ultimate recipient. While not specific to wire transfers, such detail may be available
in the Guidance Notes under Methods of Verification (G56 to G70) which include address, date of birth and
other information. In discussions with banks, there appears to be no restrictions in law or practice on the
inclusion of names and account numbers in outgoing wire transfers.