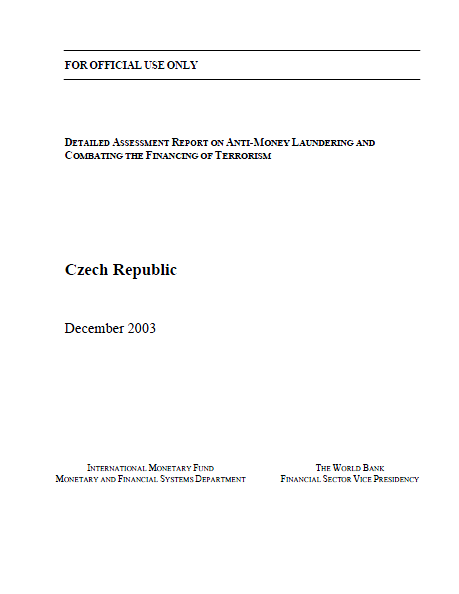 General situation of money laundering and financing of terrorism

6. Criminal activity in the Czech Republic that generates major sources of illegal proceeds is comparable to criminal activity in other countries in transition. Economic crime (e.g., fraud and asset stripping) that is linked to the privatization process is still a major concern. The authorities also mentioned tax offences as significant crime areas. Organized crime involving drug trafficking and counterfeiting of goods is also active in the Czech Republic with links to the region and Asia.

7. The Czech Republic is not yet considered to be a prime target for terrorist-related
activity and terrorist financing. Nonetheless, government authorities are aware of the
potential threat of terrorist-related funds infiltrating the financial system and are ready to
act upon it.

B. Overview of Measures to Prevent Money Laundering and Terrorism Financing

8. The authorities have made very impressive progress in the past few years in
bringing the AML regime into compliance with both European and international
standards. Anti-money laundering provisions can be traced back to 1996, with the
enactment of Act No. 61 of February 15, 1996, on Selected Measures Against Legitimization
of Proceeds from Criminal Activities (hereafter, AML Act).

9. Since that time, the authorities have undertaken further important steps
towards completing the legal and institutional framework to fight money laundering,
and have begun concrete implementation of the AML regime in the various relevant
financial sectors. Further efforts by the Czech Authorities to improve the country’s AML
legal and institutional framework and effective supervision have resulted in the enactment of
major legislation, including amendments to the AML Act in 2000, the Code of Criminal
Procedures of 2001 regarding investigative techniques and the Criminal Code with regard to
the criminalization of money laundering (No.134/2002), the Decree of the Czech Securities
Commission of October 24, 2002, regarding internal organization, the Decree of the Czech
National Bank (No.166/2002) regarding licensing, and the CNB Provision (No.1/September 2003) on internal management and control systems with regard to the prevention of money
laundering. These new legislative and regulatory initiatives represent major progress towards
meeting AML/CFT international standards. In addition, the authorities are undertaking
further amendments to their AML/CFT legislation, including (i) an amendment to the AML
Act of 1996 to incorporate the second European Union Directive on Money Laundering, and
the reporting of financing of terrorism transactions; and (ii) the draft revision of the Czech
Criminal Procedure and Criminal Code to introduce the criminal liability of legal persons, the
criminal offence of terrorism financing and the enhancement of penalties for money
laundering in certain circumstances.

10. As a result of these important efforts, the government has created and
designated various competent authorities to ensure the effective implementation of
these laws and compliance with the FATF 40+8 recommendations. The main institutions
in the Czech Republic responsible for AML/CFT are the Financial Analytical Unit, the
police, and the Office of the Public Prosecutors, which prosecutes money laundering and
financing of terrorism. The Czech National Bank, the Ministry of Finance, and the Czech
Securities Commission are the primary financial regulators and are responsible for or play a
role in the monitoring of compliance by banks, insurance and securities dealers and
intermediaries whom they regulate. Each of these bodies plays a leading role in the
implementation of these laws.

11. Considering the progress made since 1996, particularly concerning introducing the
offence of self-laundering, adopting the concept of suspicious transactions, requiring
financial institutions to appoint AML compliance officers, enhancing customer identification
and record keeping requirements, and creating special bodies or enlarging the responsibilities
and powers of the existing ones to regulate, supervise and implement laws in the relevant
financial sectors, the government has demonstrated a very strong political will and
commitment to meet the international standards for combating money laundering. The
Czech Republic is playing a lead role in its region in the fight against money
laundering.

12. There are, however, some legal issues to be resolved. The mission noted the
important draft legislative reforms that the authorities are working on at this time. Most of the
issues identified by the mission in this report are being addressed by these drafts, and the
mission encourages the authorities to pursue the process for the adoption of these drafts.
Among the main legal issues, the scope of the money laundering offence (section 252a of the
Criminal Code) appears narrower than the concept of money laundering as established by the
UN Convention Against Illicit Traffic in Narcotic Drugs and Psychotropic Substances 1988
(the Vienna convention), the Convention on Laundering, Search, Seizure and Confiscation of
the Proceeds from Crime (the Strasbourg convention), and the UN Convention against
Transnational Organized Crime (the Palermo convention). Therefore, the mission recommends
that the criminal definition of money laundering be aligned with the definition contained in the
aforementioned conventions. Similarly, if the measures available for securing assets in the
context of a money laundering investigation or prosecution are largely consistent with international standards, there is no provision which establishes the mandatory and systematic
confiscation or forfeiture of the laundered property. This may lead to a situation where the
object of the crime would not be confiscated/forfeited. Therefore, the mission would
recommend that a mandatory nature to this forfeiture/confiscation regime be established.

13. Furthermore, a major reason for concern is the total absence of any law enforcement
results in terms of specific ML prosecutions, convictions and confiscations. This deficiency
basically does not appear to be the result of failing legal or material resources, but the
consequence of a rather persistently overcautious judicial approach and a certain hesitance
to test the solidity of the AML system before the courts.

14. The Czech Republic is currently seeking to amend its Criminal Code to allow for the
imposition of criminal liability on legal persons. The Ministry of Justice is reviewing draft
language that will be submitted to the Council of Ministers for their review as they consider
re-codification of the Criminal Code. Adoption of this amendment would represent
fundamental progress.

15. The Czech Republic has signed and ratified the Vienna Convention. The Czech
Republic also signed the Palermo Convention and the UN International Convention for the
Suppression of the Financing of Terrorism, however these conventions have not yet been
ratified and fully implemented. The mission recommends their rapid ratification and
implementation.

16. With respect to the fight against the financing of terrorism, the mission
recommends that the authorities introduce promptly a specific criminalization of the
financing of terrorism, as prescribed by the UN International Convention for the
Suppression of the Financing of Terrorism. Further, with respect to the freezing of assets
suspected of being linked to terrorism, the mission notes that the supervisors and the FAU
have distributed the UN and European Union lists of terrorist individuals and organizations
to financial institutions. However, it appears that the financial institutions are not yet able to
freeze funds or property of terrorists and of those who finance terrorism and terrorist
organizations in accordance with the relevant UN Security Council Resolutions (UNSCRs).
Therefore, the mission recommends that the authorities expeditiously amend their legislation
to allow for unconditional freezing of funds and property in accordance with the UNSCRs.

17. The financial sector offers a wide range of financial services that include banking,
insurance, securities, investment management, and credit services. There are 26 banks and 9
branches of foreign banks, 224 bureaux de change licensed by CNB for selling of foreign
currency and 35 money transmission service providers, 39 insurance companies engaged in
either life or non-life insurance business, 13 active pension funds, and 47 credit unions. The
securities sector of the Czech Republic has approximately 81 securities dealers (with around
1620 licensed individual brokers) and 57 investment companies. As required by the AML
Act, all financial institutions have appointed a contact person who is in charge of
coordination and information exchange with the FAU and the compliance with the reporting duty. In most financial institutions this compliance officer can decide if a transaction will be
filed with the FAU.