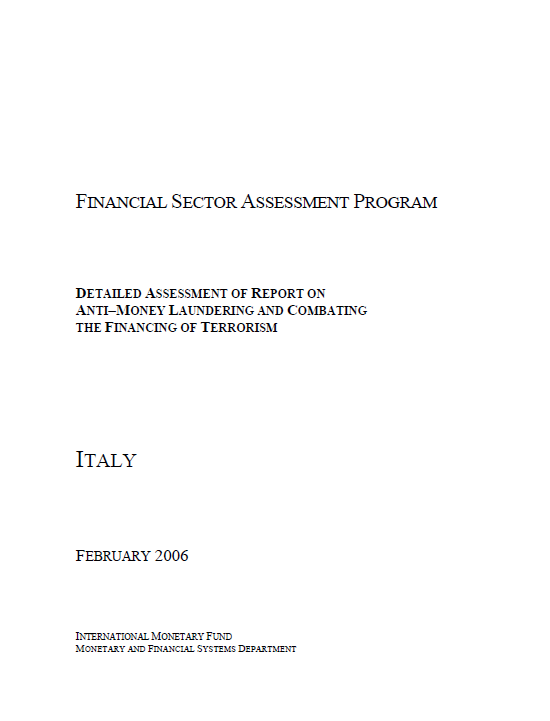 1. An assessment of the anti-money laundering (AML) and combating the financing of
terrorism (CFT) regime of Italy was conducted based on the Forty Recommendations 2003
and the Nine Special Recommendations on Terrorist Financing 2001 of the Financial Action
Task Force (FATF) and prepared using the AML/CFT Methodology 2004. The assessment
considered the laws, regulations and other materials supplied by the authorities, and
information obtained by the assessment team during its mission April 4–20, 2005, and
subsequently. During the mission, the assessment team met with officials and representatives of all relevant government agencies and the private sector. A list of the bodies met is set out in Annex 2 to the detailed assessment report.

2. The assessment was conducted by a team of assessors composed of staff of the
International Monetary Fund (IMF) and experts acting under the supervision of the IMF. The
evaluation team consisted of: Jean-François Thony, Assistant General Counsel, Team
Leader, Richard Lalonde, Senior Financial Sector Expert, MFD, Nadine Schwarz, Counsel,
LEG, Maud Bökkerink, Financial Sector Expert, MFD, Michael DeFeo, Consultant. The
assessors reviewed the institutional framework, the relevant AML/CFT laws, regulations,
guidelines and other requirements, and the regulatory and other systems in place to deter
money laundering (ML) and the financing of terrorism (FT) through financial institutions and
Designated Non-Financial Businesses and Professions (DNFBP), as well as examining the
capacity, the implementation and the effectiveness of all these systems.

3. This report provides a summary of the AML/CFT measures in place in Italy as of the
date of the mission or immediately thereafter. It describes and analyses those measures, and
provides recommendations on how certain aspects of the system could be strengthened (see
Table 3). It also sets out Italy’s levels of compliance with the FATF 40+9 Recommendations
(see Table 2).

Overall, the current AML/CFT framework in Italy is extensive and mature, and achieves a
high degree of compliance with most of the FATF 40+9. The law enforcement efforts against
money laundering have been quite successful. The AML/CFT preventive system is quite
sophisticated, but needs to be updated to incorporate the new features of the revised FATF
standard with respect to financial institutions and nonfinancial businesses and professions.
Equally important, more effort needs to be devoted by supervisory authorities to ensure the
legal framework is effectively implemented by reporting entities. The Table below
summarizes recommended actions in areas related to the FATF 40+9 Recommendations.
General

4. Italy has a comprehensive AML/CFT system initially set up in 1991 and later
updated a number of times. The justice and law enforcement aspects of the law are based
on a long-standing enforcement machinery designed to cut down on the economic power of
mafia-type criminal organizations. The design and implementation of AML/CFT policies are
placed under the Ministry of Economy and Finance while the financial intelligence unit and
the AML/CFT compliance functions are exercised by the Ufficio Italiano dei Cambi (UIC),
in collaboration with prudential and market conduct supervisors as well as the Guardia di
Finanza (GdF).

5. The law enforcement efforts against money laundering have been quite
successful, and almost 600 cases of money laundering lead to conviction every year, which is
one of the highest rates of successful prosecutions in Europe. Based on three different
systems of confiscations of criminal assets law enforcement authorities confiscated more
than 130 million Euros worth of criminal proceeds in 2004.

6. While quite sophisticated, the AML/CFT preventive system has generally not
been updated to reflect the new provisions of the revised FATF standard and of the 2001
European Directive on Money Laundering. There is a high degree of awareness and broad
implementation of AML/CFT preventive measures within the financial sector, as well as
good cooperation between supervisory authorities. Nevertheless, the most pressing
challenges concern:

• Need to increase on-site inspection efforts and resources with respect to the securities
and insurance sectors, Bancoposta and non-prudentially supervised financial
institutions; and

• Need to ensure the application of a more effective sanctions regime.

7. The legal framework for designated non financial businesses and professions
(DNFBPs), which was adopted in 1999 and 2004, urgently needs to be implemented. The
Financial Intelligence Unit has developed a state of the art analysis capacity based on an
harmonized system of computerized data collection but some limitations in the processing of
suspicious transactions limits its efficiency. The existing AML/CFT legal framework is very
complex and would gain in clarity and effectiveness if it were consolidated in a single
instrument, streamlining and updating the numerous existing laws and regulations.

8. The authorities are paying due attention to implementing the revised standard
and to further strengthening the AML/CFT regime. Draft regulations on DNFBPs are being
finalized, a law to ratify the Palermo Convention is under consideration by parliament,
provisions to strengthen the terrorist asset freezing regime are to be adopted soon, according
to the authorities, and supervisory resources are being increased with respect to the securities
sector.

General Situation of Money Laundering and Financing of Terrorism

9. Italy has historically suffered from a high rate of criminality, organized violence
and penetration of political and economic life by organized crime groups like the
camorra in Naples and the mafia in Sicily. The organized crime problem has become less
visible in recent years but diversion of funds from public contracts by groups like the Sicilian
Mafia is still a law enforcement concern and extortion and loan sharking continue to be
sources of organized crime income. On the mainland drug trafficking and distribution, loansharking,
extortion and trafficking in smuggled cigarettes are lucrative activities for criminal
groups. Because of more developed economic activity in the north and central portions of
Italy, laundered funds from criminal activity elsewhere are often invested in properties and
enterprises in those areas, which also experience drug trafficking and loan-sharking. The
country has one of the highest cash payment ratios in Europe, and tax evasion that exists in
sectors such as real estate provide a favorable environment to money laundering.

10. Terrorist financing has been the subject of highly publicized prosecution and is
considered by Italian authorities to be a risk among large communities of legal and illegal
immigrants. Italy has been under specific terrorist threats since the war in Iraq. As a tourist
destination, Italy has a number of human and cultural targets which create possible
temptation for potential terrorists in Italy to finance an attempt on targets within easy reach.

d. Progress since the last IMF/WB assessment or mutual evaluation

Since the last FATF mutual evaluation, which took place in October 1997, a lot of
changes have occurred not only in the development of the AML system but also in the
evolution of national and international policies (including the revision of the FATF
Recommendations and the inclusion of financing of terrorism standards), which in turn have
resulted in changes in the legal and institutional framework. This section reports only on the
changes made with respect to the suggestions for improvements of the 1997 FATF report.

Self laundering is still not covered in the definition of money laundering because it is not
seen as consistent with the general principles of penal law. A draft law was presented to
parliament to this effect but failed to be adopted. No step was taken also with regard to the
alleviation of the burden of proof as to the mens rea of the offence, as knowledge of the illicit
origin of the assets cannot be presumed. Legal persons are not criminally liable for the
offence although a draft law is being considered in order to extend the administrative liability
of legal entities in the case of the commission of a money laundering offence (see infra).

A draft law is being considered, as part of the ratification process of the Palermo
Convention, in order to consolidate confiscation provisions under Article 240 of the Penal
Code, as suggested by the report. This draft has been pending before parliament since
June 2003.

• The FIU and the reporting mechanisms

Since the 1997, when the UIC had just been established as the authority to receive
suspicious transactions, a lot of progress has been made in setting up reporting mechanisms.
The UIC has been formally established as the FIU by Law 388 of 23 December 2000. In
January 2001, the BoI issued the Operating Instructions for Identifying Suspicious
Transactions (the “Decalogo”), which sets out the reporting procedure. The UIC is now fully
operational as an FIU and it processed more than 6.500 STRs in 2004 and issued several
guidance notes. It is now a member of the Egmont Group and of the FIUNET network of the
EU FIUs. However, the suggestion made by the report that the FIU should have access to law
enforcement information has not been implemented and the UIC cannot access law
enforcement information except on the basis of a request by a foreign FIU. The UIC
considers that such access is not necessary since almost all STRs transmitted by reporting institutions are forwarded after analysis to the law enforcement agencies and the checks
against the databases are carried out at that stage by the law enforcement agencies
themselves.

A mechanism was instituted in Decree Law 143/91 to require law enforcement
agencies to report to the FIU on cases where STRs are not followed up by the investigative
authorities (Article 3.5. of the AML Law). The UIC is then required to forward the feedback
to reporting entities. The UIC also uses the information to provide more accurate guidance to
them. However, financial institutions continue to complain about the limited feedback they
receive following their filing of an STR.

The Guidance Committee instituted by Law 143 of May 3, 1991 has never met.
Instead, an AML Committee, composed of the MEF, the BoI, the UIC and the GdF, has been
setup as a policy body and meets regularly. In addition, since October 2001, a Financial
Security Committee (FSC) was established to deal with financing of terrorism issues.
Authorities are now considering how to improve AML coordination, in particular in view of
the effective extension of AML/CFT measures to DNFBPs, building on the successful
experience of the FSC. The UIC has asserted its role as the main body to monitor compliance
of financial institutions and financial intermediaries with AML requirements, and
coordination with the BoI is not an issue, considering that the UIC is an instrumental entity
of the BoI.

• Financial and nonfinancial businesses and professions

The 1997 report called for better supervision of financial intermediaries which were
just subject to registration with the UIC and of nonfinancial businesses like casinos which
were not required to identify their customers.

Financial intermediaries registered with the UIC pursuant to Article 106 of the BL are
inspected by the GdF for compliance with AML requirements. As indicated further in this
report, the on-site inspection efforts and resources of the GdF still need to be increased.