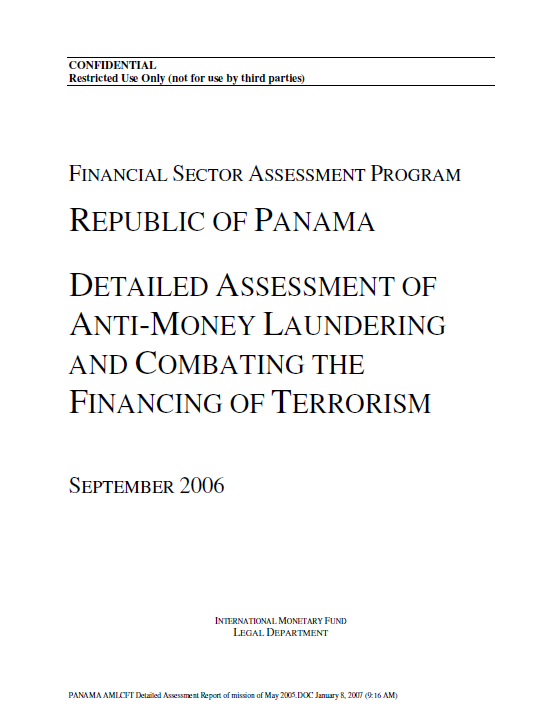 I. ASSESSMENT OF OBSERVANCE OF THE FATF RECOMMENDATIONS

This assessment of observance of the Financial Action Task Force (FATF)
Recommendations for anti-money laundering and countering the financing of terrorism (AML/CFT) has been completed as part of an evaluation of Panama’s observance of regulatory standards for the financial sector.

Panama is a constitutional republic with a democratically elected president who is both
chief of state and head of government. The current government began its four-year period in
September 2004. The country has a unicameral legislative assembly, also elected by popular
vote, and an autonomous judicial branch. The legal system is based on the civil law tradition,
with some features of its commercial legislation being influenced by legal institutions of
United States common law (i.e., the regulation of trusts).

With a population of approximately 3 million, Panama has a territory of 78,200 square
kilometers in the Central American isthmus, between the Caribbean Sea and the
North Pacific Ocean, bordered by Costa Rica and Colombia. Full control and operation of the
Panama Canal connecting the Atlantic and Pacific oceans were transferred from the
United States to Panama in 1999. The Canal drives much of Panama’s economy, along with
the Colon Free Trade Zone (ZLC), a booming real estate market and a well developed
services sector, including banking and financial services. Although there is a legal parity
between the local currency (Balboa) and the U.S. dollar, in practice no local currency
circulates and all commercial payments and financial transactions are made in U.S. dollars.
Panama endeavors to provide economic and political leadership in the Central
American and Caribbean region and is a member of many international organizations,
including the Caribbean Financial Action Task Force (CFATF), which it currently presides.
Banking activities represent the most significant component of the financial services
sector. Banking system assets on a nonconsolidated basis were $39.6 billion, and on a
consolidated basis (including local and foreign subsidiaries of Panamanian-headquartered
banks) were $45.8 billion at end-March 2006. At end–March 2006, there were 73 banks,
including 2 state-owned banks, 37 general license private banks, and 34 international license
banks. The banking center in Panama has a significant international presence, including
banks from the United States, the United Kingdom, Spain, and other Latin American and
European countries.

Lawyers and accountants are not required to belong to a professional association in
order to practice, and the associations’ codes of ethics are not legally enforceable. There are ethical rules for lawyers established by law and subject to investigation and sanction by the
Supreme Court, although there have been very few sanctions in practice.
General situation of money laundering and financing of terrorism
Information from various criminal investigations shows that the reporting and other
preventive requirements in the money laundering law have had a dissuasive effect on
money laundering activity in financial institutions. The UAF reported that money
laundering has moved towards other parts of the economy in order for launderers to avoid the
developed capacity of banks to detect the introduction of illicit capital.
The geographic location of Panama makes it an attractive transit area for drugs and
related money laundering. To date, the 10 money laundering cases that have been
prosecuted were based on narcotics-related predicate crimes. The cases have resulted from
internal efforts in the Public Ministry (Ministerio Público) as well as from international
cooperation. Other financial crimes cases have resulted mainly from foreign investigations of
corruption where funds were later deposited in Panamanian financial institutions.
An area of great concern involves the role that the Free Zone of Colón (ZLC), the
second largest free-trade zone in the world, can play as the originating or transshipment point
for goods purchased with proceeds of narcotics trafficking, including through the Black
Market Peso Exchange. The smuggling of currency, drugs, and prohibited chemical
materials, the introduction and transshipment of counterfeit merchandise, and several forms
of customs fraud also generate criminal proceeds that expose the system to money
laundering.

Officials advised that the Panamanian jungle border with Colombia is occasionally
penetrated by the illegal armed groups active along their common border, but did not
consider this to pose a terrorist threat to Panama. There have been no known cases of
financing of terrorism.

The following are the governmental agencies with direct responsibility on AML/CFT issues in the areas of prevention, regulation, supervision, investigation or prosecution:

• Financial Analysis Unit (UAF), within the National Public Security and National Defense Council of the Ministry of the Presidency;

• Ministry of Commerce and Industry (MICI), which includes:

• Superintendency of Insurance and Reinsurance (SSRP);

• Accounting Board (it has no AML/CFT responsibilities at the moment).

• Gaming Control Board of the Ministry of Economy and Finance;

• Attorney General (Ministerio Público and the judicial technical police within);

• Judicial Branch (no specific courts specialized in money laundering or the financing of terrorism; and

Panama has criminalized money laundering through Articles 389 to 393 of the Penal Code, as adopted through Law 41 of October 2, 2000 and Law 1 of January 5, 2004. This Law 41 amended the previously existing AML law, stating in Article 389 of the Penal Code that, “Whoever receives, deposits, trades, converts, or transfers monies, titles, securities, goods, or other financial resources knowing that the origin of the activities is related with drug trafficking, qualified embezzlement, illegal weapons trafficking, human trafficking, kidnapping, extortion, embezzlement, public corruption, terrorism, robbery, or internal vehicle contraband established in the Panamanian Law, with the purpose of hiding or covering their illicit origin to assist evasion of juridical consequences of such punishable acts shall be sanctioned with prison from 5 to 12 years and 100 to 200 days of fine.” Law 1 of 2004 added intellectual property violations as a predicate within Article 389 of the Penal Code. Panama’s law takes the predicate list approach to the crime of money laundering.

Panama has ratified both the Vienna Convention and the Palermo Convention, The Vienna Convention, Article 3(1)(b)(i) is satisfied by the language of Penal Code Articles 389 and 390. However, Article 6(2)(b) of the Palermo Convention is not fully satisfied, in that the list of predicate offenses does not include a fully comprehensive range of offenses associated with organized criminal groups. Penal Code Article 389 does cover 11 felony predicate offenses, but does not include all of the FATF Recommendations noted in the
Glossary of Definitions. In order to comply with this list, there should be predicate offense of terrorist financing, participation in an organized criminal group and racketeering, sexual exploitation including of children, trafficking in stolen goods (as opposed to only vehicles), counterfeit currency, environmental crime, murder, the general act of smuggling, piracy, fraud, and insider trading/market manipulation. ML is considered to be an autonomous offense. It is not subordinated to the predicate offense, and can be independently charged. The crime of money laundering applies to an individual who has committed a predicate offense, provided that the person carries out one or more of the terms governing the legal provisions in Articles 389–393.

Penal Code Article 389 applies to the listed predicates established in Panamanian law. The authorities advised that the crime of money laundering extends to conduct of predicate offenses which occur in other countries, as well as in Panama, and that Panamanian law would apply in either circumstance. Articles 8 and 9 of the Penal Code provide legal support for this position. Article 8 provides that Panamanian law will apply to punishable acts committed outside the borders of Panama, where those laws relate to acts against the government of Panama, crimes against public health [such as drug offenses], crimes against the national economy and public administration, and the falsification of official documents or money destined for Panama. Article 9 also applies
Panamanian law to acts committed outside the country where the results of the crime are produced in Panama, or there are other various listed effects on Panama.