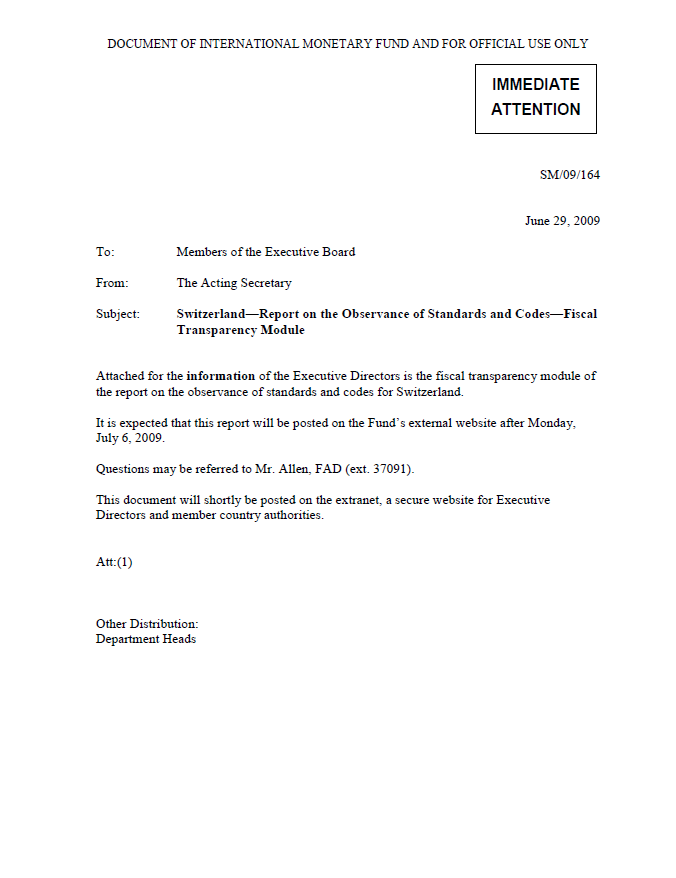 2. This assessment focuses primarily on fiscal transparency at the central
government (confederation) level. Given the unique character of political economy and
fiscal federalism in Switzerland, and that less than a third of general government expenditure
or revenue is accounted for by the confederation, this does not give a complete picture.
Cantons are responsible for important areas of economic and social policy, and have a strong
influence on the composition and impact of public spending, and the overall stance of fiscal
policy. Further work would be needed to prepare a comprehensive assessment of fiscal
transparency and fiscal risk covering the whole of general government.

A. Clarity of Roles and Responsibilities

3. General government is defined consistently with Government Finance Statistics
(GFS) principles and is well covered in the budget process. 1.1.1
General government is defined in accordance with the principles of the Government Finance
Statistics Manual (GFSM 2001) and comprises four main sectors (Box 1): The federal
government comprises seven departments and related offices, the federal chancellery, and
four special funds. The special funds cover (i) railway projects; (ii) infrastructure;
(iii) technical universities; and (iv) the alcohol board. There are 26 cantonal governments.
The cantons are sovereign states with considerable autonomy. There are 2715 communes,
which likewise have considerable autonomy. The four social security institutions cover
(i) old age and survivors protection schemes; (ii) the disability protection scheme;
(iii) income compensation allowances in case of mandatory service and maternity; and
(iv) unemployment insurance. These schemes operate essentially on a pay-as-you-go basis.

Box 2. The SNB’s Support for UBS as a Quasi-Fiscal Activity

The SNB has justified its recent support of UBS in relation to its role as lender-of-the-last resort. This explanation rests on three considerations, namely: that UBS is a systemically important institution; could provide sufficient collateral; and was solvent. On the last point, the SNB obtained advice from the Federal Banking Commission that UBS was solvent, enabling it to provide emergency support. It did so by funding 90 percent of the purchase price of distressed assets to the value of US$60 billion.1 These assets were valued by external assessors, and transferred to a Special Purpose Vehicle (SPV) under the SNB’s control. To reduce the risks of not fully recovering the funds of the SPV, the SNB has set up several safeguards against potential losses. UBS’ equity contribution to the stabilization fund, amounting to 10 percent of the assets purchased, serves as the primary loss protection. In the case of a loss on the SNB loan, the SNB’s warrant for 100 million UBS shares serves as secondary loss protection. This transaction should be classified as a QFA given the risk that the SNB may fail to recover all of its investment. In this case, the profits of the SNB distributed to the federal government would be lower, with a negative impact on the budget.
________________________
1/ On February 10, 2009, it was announced that the stabilization fund would acquire UBS assets for a lower
maximum amount than originally planned (approximately US$ 40 billion).

68. There are some areas, however, where the authorities could consider taking
further measures, in consultation with parliament where appropriate, to enhance fiscal
transparency and the presentation and management of fiscal risks. These are summarized
below.

Disclosure of additional fiscal information by the federal government

69. Support provided by the federal government and the SNB to UBS and other
financial institutions affected by the global crisis is reported in, respectively, the
confederation’s and the SNB’s financial statements, supplemented by quarterly updates
by the SNB. However, in order to provide a comprehensive assessment, the federal
government should consider publishing in its financial statements information on the SNB’s
support operations alongside the report of its own activities.

71. The government should make an effort to disclose information on specific fiscal
risks, including contingent liabilities and QFAs, with the budget, in line with the IMF’s
Guidelines for Fiscal Risk Disclosure and Management, and eventually publish a single
statement of fiscal risks.37 In particular, the universal services provided by Swiss Post, Swiss
Rail, and others are partly financed through cross-subsidies, which represent a form of
interpersonal redistribution, and taxes and transfer payments from the budget are considered
more desirable to support such activities from a transparency perspective. QFAs are
disclosed only to a very limited extent.

72. The Social Security Funds should be clearly distinguished. Apart from the
unemployment insurance scheme, the other three funds are jointly operated. The old age and
disability pension funds are cross-financing each other, with the first fund running persistent
surpluses that are used to finance the deficits of the second. Clearly, separating the three
funds would make the financial health of each of them more transparent and facilitate the
necessary policy discussion about the sustainability of current policies. Parliament has
already passed a bill to separate the old-age and disability pension funds into two separate
funds. A referendum on the issue will be held in September 2009. In addition, an overview of
the finances of the social security sector and its relationship with the budget in the short to
medium term, in the context of an assessment of long-term fiscal sustainability, should be
included in the budget documents. More forward-looking information on the finances of the special funds would also be useful. Together, these measures would provide a better basis for
assessing the sustainability of current fiscal policy.

73. More information should be published on the sensitivity of the budget to changes
in macroeconomic variables and an alternative macroeconomic and fiscal scenario,
building on the useful analysis already published by the government. This would provide
a better basis for assessing the uncertainties surrounding the budget.38 In addition, the federal
government could consider extending and formalizing the process of external review of
macroeconomic forecasts and assessments of economic developments.

74. An overview of the finances of public corporations could also be provided in the
budget. Some corporations receive significant funding from the budget, and others conduct
QFAs, making it important to consider their financial position and profitability in the context
of fiscal policy.

75. Additional information should be reported on public debt management, namely,
the debt management strategy and performance against it, and the impact of parameter
changes on debt-servicing costs.

76. A summary statement of all new policy measures that are reflected in the budget
proposals, with an estimate of their fiscal impact, should be published, to supplement the
summary data on expenditure by tasks already provided in Volume 3 of the budget
documents.

77. Each federal government department should be encouraged to publish an
annual report that summarizes relevant information concerning their goals and objectives,
strategic priorities, operational risks, financial results, and nonfinancial performance. This
would be in line with practice in many OECD countries.