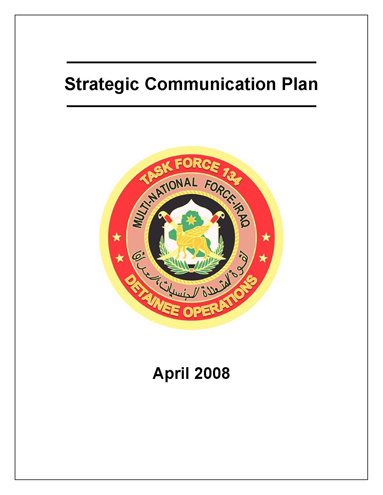 “The counterinsurgent is tied to his responsibility and his past, and for him, facts speak louder than words. He is judged on what he does, not on what he says.” 1
— Counterinsurgency Warfare: Theory and Practice

The concept of strategic communication is an often-discussed topic within government policy circles and at all levels of professional military education. Doctrinal definitions are continually updated and refined to the point that few appear to agree upon the role that strategic communication should play as either a diplomatic function, an aspect of military operational planning, or a process to be executed in the course of national policy. There are, however, a set of key points that all sides seem to agree upon.

The first is that effective strategic communication is essential to winning the “information war.” Conventional wisdom suggests that this is undoubtedly true, and the recognition that our struggle against violent extremism is a “war of ideas” seems to be almost universally accepted.

The second point is that strategic communication involves the larger effects of what a given entity—be it a nation, a people, an organization, or even an individual—says and does in pursuit of a goal. This may seem overly broad, but it is important to note that the most substantive discussions of strategic communication center on closing what is sometimes called the “say-do gap.” That is, aligning the way a body explains, justifies, frames or mitigates its actions relative to the actions themselves in the face of public scrutiny.

For our purposes as the counterinsurgent force, we will consider it an absolute imperative that our actions are fully congruent with the ideals that we promote. There can be no “gap” between what we say and what we do.

Leaders must understand the importance of this last statement; it is the keystone of our communication efforts. As the above passage from Counterinsurgency Warfare: Theory and Practice makes clear, we have the responsibility as the counterinsurgent to “walk the walk” as well as we “talk the talk.” Our priorities and values must be displayed in every deed, and reflected in the actions of every man and woman serving in internment facilities throughout the Iraqi Theater of Operations.

What you will find here is far more than a collection of talking points or a series of taskings for the Public Affairs Office and Information Operations Cell. The doctrinal information functions of PA and IO certainly serve to support select aspects of our strategic communication initiatives, but they are not the main effort. Rather, this plan places the emphasis on the conduct of the individual service member to demonstrate who we are, what we do, and what we stand for. This point is critical to the ultimate success of the plan.

What makes the plan actionable, however, is comprehensive command involvement. Soldiers cannot be expected to spontaneously embrace the concepts outlined herein when little, if any, of their training has prepared them for detainee population engagement. Consequently, I am making the execution of the Task Force 134 Strategic Communication Plan a command priority, and its stewardship the duty of every commander in the task force.

This plan has no end date; it continues in effect so long as its objectives remain unchanged. While it is expected that any alteration to the Coalition Force mission and authorities under the United Nations Security Council Resolution would require shifts in communication themes, the larger purpose of our Strategic Communication Plan is enduring.

“In COIN environments, distinguishing an insurgent from a civilian is difficult and often impossible. Treating a civilian like an insurgent, however, is a sure recipe for failure.” 2
— FM 3-24, Counterinsurgency

Winning a counterinsurgency requires gaining the support of the population. In the case of Iraq, defeating the insurgency means empowering moderates to marginalize the violent extremists. Detainee operations are a major front in that struggle because internment is, at its best, population engagement.

Simply stated, waging a successful counterinsurgency “inside the wire” can mean the difference between winning and losing the war in Iraq, and it is the responsibility of every leader conducting internment operations in this theater to fully understand the nature of the fight.

Make no mistake, detainee operations is certainly a battlefield; it is the battlefield of the mind, and it is one of the most important fights in counterinsurgency.

When viewed at the operational level, coalition detainee operations in Iraq directly affect more than one-half million Iraqis.3 The civilian internees, their families, friends, tribes and communities are all impacted by their captivity in ways that influence the course of the war here. What this means to us tactically-speaking is that there are two distinct populations whose support we must gain: The detainees and the detainees’ immediate network of friends, family and tribesmen. These populations interact and affect one another’s attitudes and decision-making, meaning that how we engage one will significantly impact the other. If done well, we stand to gain the support of many; but done poorly, we risk losing the support of all.

Further, we must understand that in the larger strategic context, it is how we are perceived to conduct these operations that has the broadest impact—reaching far beyond those who are directly involved, and stretching to touch virtually every one of the more than one billion Muslims worldwide.

Unfortunately, we have already seen the effect that humiliating and degrading treatment of detainees—real or alleged—can have on the global view of our mission here. The reality is that we are waging this counterinsurgency on the world stage, and the manner in which we conduct internment operations here will not only mean the difference between success and failure in Iraq, but in the war against violent extremism worldwide.

This is the ultimate purpose of our strategic communication plan:

Demonstrate to the citizens of Iraq and the greater Muslim Umma that we are dedicated to establishing an alliance with moderate Muslims and empowering them to marginalize violent extremists.

Faithful execution of this plan is critical to our success, and it is the duty of every leader within the task force to understand its purpose and apply its guidance. Each and every warrior in this command must understand that all we say and do will be judged by the peoples of the world, and it is our inherent responsibility to inform that judgment through the values demonstrated in our every action.

In fire support targeting, the best places to engage HPTs are called Targeted Areas of Influence (TAIs).10 In communication planning, these points or areas where the organization can best influence a target are not only geographic, but modal as well. That is, organizational communication engages key audiences regionally and through various targeting modes to include traditional news media and interpersonal transactions that encourage supportive behavior.

Communicating with the troops is a command responsibility; true leaders walk the lines and mentor the troops. Leaders at all levels in Task Force 134 will focus their efforts and presence in our detention facilities 24/7. Without success here, the entire plan fails. Take the time.

Nearly 80 percent of Iraqis cite television as their most important source of information. We will be aggressive in securing their interest, and open to providing them the greatest access possible.

Arabic-language news organizations have tremendous reach; we will leverage this capability to speak to the greater Islamic community throughout the region.

In collective societies such as those in the Middle East, men of power and tradition have a kind of influence that is far less common in the West. Our efforts will recognize this by reaching out to these influencers in direct, personal meetings—to include various international executive and diplomatic engagement opportunities outside the Iraqi theater.

We will continue to educate global decision makers on our principles and operating concepts. Organizations such as the UN, NATO and the ICRC must understand what we are doing, and why it is important. We will teach them.

The western press is here in Iraq, and they are curious about what we do. Again, transparency is essential, and our enthusiasm in providing access speaks volumes of our intentions. The same can be said of the so-called “hometown” news agencies, which might not have a presence in Iraq, but can certainly be targeted through direct communication.