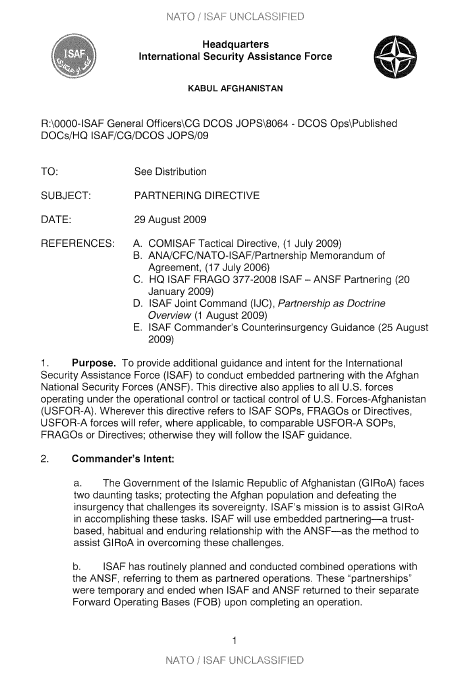 1. Purpose. To provide additional guidance and intent for the International Security Assistance Force (ISAF) to conduct embedded partnering with the Afghan National Security Forces (ANSF). This directive also applies to all U.S. forces operating under the operational control or tactical control of U.S. Forces-Afghanistan (USFOR-A). Wherever this directive refers to ISAF SOPs, FRAGOs or Directives, USFOR-A forces will refer, where applicable, to comparable USFOR-A SOPs, FRAGOs or Directives; otherwise they will follow the ISAF guidance.

a. The Government of the Islamic Republic of Afghanistan (GIRoA) faces
two daunting tasks; protecting the Afghan population and defeating the
insurgency that challenges its sovereignty. ISAF’s mission is to assist GI RoA
in accomplishing these tasks. ISAF will use embedded partnering-a trustbased,
habitual and enduring relationship with the ANSF-as the method to
assist GIRoA in overcoming these challenges.

b. ISAF has routinely planned and conducted combined operations with
the ANSF, referring to them as partnered operations. These “partnerships”
were temporary and ended when ISAF and ANSF returned to their separate
Forward Operating Bases (FOB) upon completing an operation.

c. Embedded partnering is a fundamentally new approach that extends
beyond just working together outside a FOB. It changes the current paradigm
by merging ISAF and ANSF into one entity with a single purpose-protecting
the population by defeating the insurgency.

d. ISAF cannot independently defeat the insurgency; a well trained and
competent ANSF is necessary to achieve this endstate and to ensure
GIRoA’s long-term survival. To rapidly expand the capabilities of the ANSF,
ISAF will change the manner in which we partner. Embedded partnering will
integrate ISAF and ANSF units together to form a more coherent relationship:
we will live, train, plan, control, and execute operations together at all
command echelons. The synergy created through embedded partnering will
increase the likelihood of accomplishing the mission.