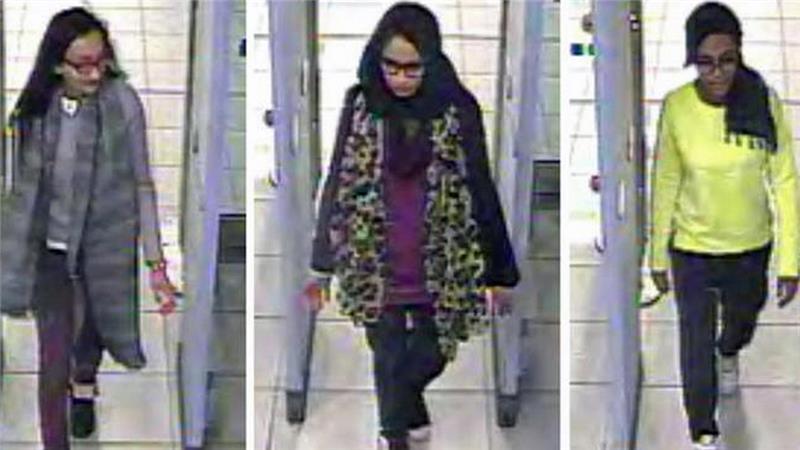 Three British teenagers Shamima Begum, 15, Kadiza Sultana, 16, and Amira Abase, 15, who traveled last month to Turkey before crossing the border into Syria to join the Islamic State of Iraq and the Levant (ISIL).

The “innovative use of social media and messaging” by the Islamic State of Iraq and the Levant (ISIL) “has played a key role in motivating young Western males and females to travel to the Syrian conflict to join and support the self-declared Islamic State” according to a joint intelligence bulletin released by the Department of Homeland Security and FBI last month.  The 5-page bulletin titled “ISIL Social Media Messaging Resonating with Western Youth” was disseminated to law enforcement throughout the country at the end of February to report on the “continuing trend” of Western youth being inspired to travel to Syria and join ISIL forces.  According to the bulletin, this trend is aided by the fact that “Western youth are willing to connect over social media with like-minded persons, and have proven adept at obfuscating such social media usage from their parents and guardians.”

ISIL’s “savvy media packaging” has helped it gain “widespread attention” among both male and female youth demographics, particularly those “who are already radicalized to violence.”  The group’s “Western-focused messaging frequently features fluent English speakers, including Western youth, with whom audiences probably are able to relate” including “several videos featuring high-tech filming and editing” that likely intensifies the “appeal of these messaging efforts.”  Their videos “often include dramatic shots and sound effects to further the viewer’s tension and interest” as well as “graphics and chronological layout” making them “more like documentary films.”

Moreover, ISIL’s resonance with “with female youths is unprecedented and has prompted a number to attempt to travel to Syria.”  While “most females appear motivated to travel based on a desire to live in ISIL’s self-declared state” rather than participate in the conflict, the effectiveness of the group’s messaging demonstrates “ISIL’s broad appeal across demographic boundaries.”  The joint intelligence bulletin cites a number of instances where Western youth have attempted to travel to Syria to join ISIL and states that “Western teenagers currently in Syria are known to have accessed violent extremist messaging for guidance on means and routes for traveling to Syria.”  An article earlier this month in the British newspaper The Independent cited Helen Ball, the London Metropolitan Police Service Senior National Coordinator for Counterterrorism, as saying that at least sixty British women, including girls as young as fifteen, have traveled to Syria in the hopes of joining ISIL.

A significant number of American youths have also attempted to “radicalize others to violence, establish contact with like-minded individuals, and travel to Syria to join the group.”  The Wall Street Journal reported earlier this month that at least one-hundred and eighty Americans have traveled or attempted to travel to join ISIL in Syria.  The Justice Department has prosecuted nearly thirty cases related to ISIL in the last eighteen months and the FBI claims to have ISIL-related investigations open in all fifty states.

Some of the cases do not involve direct attempts to travel to Syria, but rather efforts to help others join ISIL often using social media.  One case cited in the joint intelligence bulletin involves a Virginia teenager who was arrested in February for encouraging others to join ISIL and even facilitating travel arrangements.  The DHS-FBI bulletin states that “ISIL messaging likely influenced [the teenager] to create, produce, and disseminate violent extremist messaging via social media to radicalize other youth to violence” as well as “establish connectivity with violent extremists overseas, connect with like-minded aspirants, and distribute ISIL messaging to a network of friends and followers.”  One of his associates reportedly was successful in traveling to Syria to join ISIL.  An article in the Washington Post about the case states that the boy was viewed by community members who knew him as a quiet, though typical teenager.  He was “taking Advanced Placement classes and listed some of his interests as civil rights and social action.”