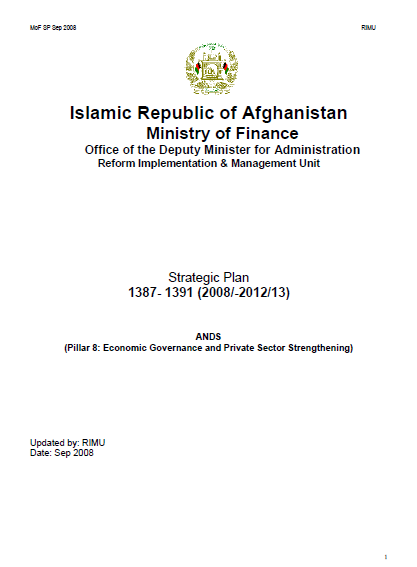 Office of the Deputy Minister for Administration

The Ministry of Finance (MOF) has a clearly defined role serving the government and people of Afghanistan, in terms of mobilizing revenue and managing government finances. To efficiently undertake these functions, the Ministry prepared a five year strategic plan in 1384 and much progress has been made in the past three years towards establishment of an effective and transparent public financial management system as well as in tax reforms and increase of the domestic revenues. MoF developed the MTFF and MTBF (Annex B), which has been approved by the cabinet and parliament. As part of the MTBF, budget ceilings for the operating and development budget as well as revenue targets are set for the next five years 1387-1391, moving towards fiscal sustainability. MoF developed the Macroeconomic Framework, which is part of ANDS. Moreover, the Strategic Plan Monitoring and Evaluation Framework has been developed; performance indicators with annual targets (1387-1391) have been set and are being monitored (Annex A). And, the Strategic Plan is updated in 1387 for the next five years. It is worth mentioning that the Strategic Plan will be reviewed and updated annually based on the needs.

To date, new laws and their regulations, Public Finance and Expenditure Management Law,
Customs Law, Procurement Law and Income tax law, which provide the legal basis for MoF
operations, have been adopted to regulate and simplify the procedures and create efficiency to
the system; however, execution of these laws still remain challenging and much effort is needed
to be made to efficiently and effectively implement these laws/regulations by establishing
efficient mechanisms and building the capacity of the staff of MoF and line ministries in this
regard.

Regarding the budget, previously provincial economic development was neglected. As a result,
more than half of the budget was spent centrally resulting in poor service delivery in the
province, and a negative perception in the provinces of the reconstruction process. Also, there
was no link between inputs and outputs and budgets were formulated based on the resources
needed not based on what output and outcome it will produce. Therefore, the Ministry of
Finance intended to reverse that trend through program and provincial budgeting by channeling
more resources to the provinces and linking line ministries budget to ANDS priorities and
objectives as well as to provincial development plans. The expansion of both mechanisms has
already started and shall be completed by 2010.

To make the financial management system more effective and efficient, MoF developed
Afghanistan Financial Management Information System (AFMIS), which is being expanded to
line ministries and provinces. Also MoF introduced the Verified Payroll Program under which
all government employees shall be covered and salary bank accounts shall be opened to them,
making the system efficient and transparent. The new procurement law and regulations have
been promulgated and trainings have started to develop the line ministries on the new
procurement methods as stated in the law and to enable them to carry out stand alone
procurement.