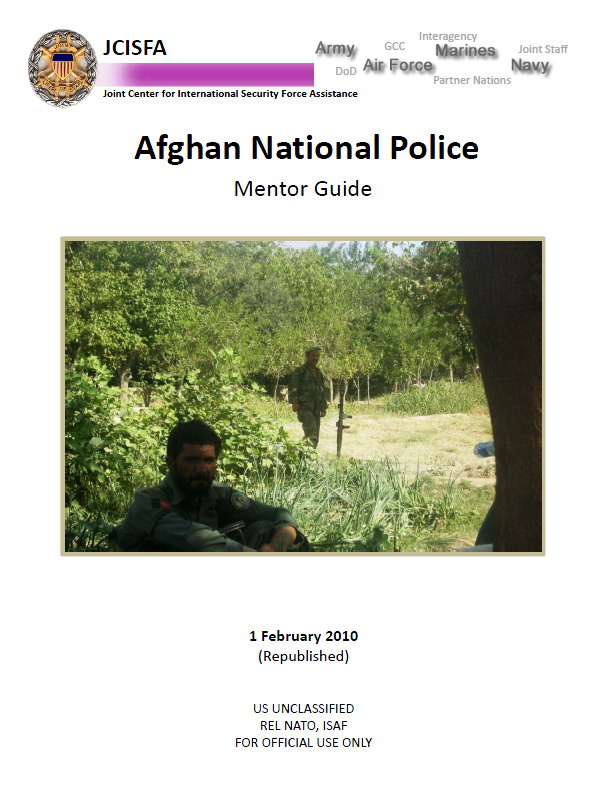 One of the problematic obstacles to Afghan sovereignty and the drawdown of coalition forces is Afghanistan’s security infrastructure. At the heart of this challenge are the readiness, training, manning, and overall effectiveness of theAfghan National Police (ANP). The ability of the local police to maintain order and security throughout the country will facilitate the transition of the country to democracy.

Due to conflict, many organs of the Afghan government have lost their “institutional memory,” and no longer can be mentored and taught by the previous generation, but the ANP do have veteran police. Some ANP officers have served as police under the communist regime of the 1980’s. Police, especially officers, will often claim over ten years of service. The ANP is perhaps the only arm of the government which has such memory. This may or may not be a positive factor.

Because of their forward position in the counterinsurgency, the fact that the ANP are more lightly armed than the ANA, their tendency to operate in much smaller groups, use repetitive routes, and the fact that they are often in static positions, the ANP are often times more likely to be killed by insurgents than are ANA.

Police as a Counterinsurgency Force

The primary counterinsurgency objective is to provide security and rule of law to enable local institutions to grow and increase in effectiveness while decreasing the ability of the insurgency to execute operations. Because of their frequent contact with the populace, police are often the best force for countering small insurgent bands supported by the local populace. It is equally important to note, however, that in the case of larger insurgent bands, or insurgencies that have had time to mature, the local police often become ineffective in countering them based on mandate, mission, legal limitations, and training and equipping issues.

In these types of counterinsurgency operations, special strike units, military or police, may need to move into the area to defeat the threat. The local police, if previously effective, will play a key role in intelligence development through their intimate knowledge of the area and ability to develop a detailed intelligence picture of the insurgent strength, organization, and support. Except when faced by a large, aggressive insurgency, the police should be able to accomplish their goals by implementing the tenets of Community Policing. These actions become the basis of the policeman’s daily duties.

Police effectiveness on the Spectrum of Conflict

Regardless of how effective a police force may be, law enforcement’s ability to neutralize a large or entrenched insurgency is limited at best. The police can, depending on their level of development, help provide intelligence and support to more heavily armed, equipped, and trained elements (such as the ANA) that will eradicate the insurgency.

Even if the insurgency renders the local police unable to provide security, the police advisors can still work to help develop the station in such areas as:

ANP normally work a “fire house” schedule where they will live and work at the station for a number of days followed by some time off. Unfortunately, the work schedule of the ANP is rarely formalized. Therefore neither the chief nor the advisors can accurately predict how many ANP will be at the station from day to day. This lack of predictability is exacerbated when the ANP conduct a major operation. It is not unusual on the day after an operation for the ANP to have almost no one on duty due to poor schedule management. Typically, advisors can expect to find 50-70% of a station’s assigned strength on duty at any given time. While some of the absences are authorized (time off, sick, injured, leave) some of the absences may be “ghost” police who either do not exist or exist only to collect a pay check.

Pre-shift guard mounts or inspections of ANP on duty are alien concepts to most ANP leaders. Many ANP will receive their duty assignment to a check point and then will remain there all day without relief. With the exception of the station’s guard force, most ANP do not work at night and will be found asleep in the station. If the area has a high threat of attack, most of the ANP may stay up at night to protect themselves then sleep during the day, leaving the community uncovered Those ANP assigned to staff work normally live at the station also and will be “on duty” from mid morning until mid afternoon. The chief also normally lives at the station, but his work hours may vary depending on his assessment of the threat in the area.