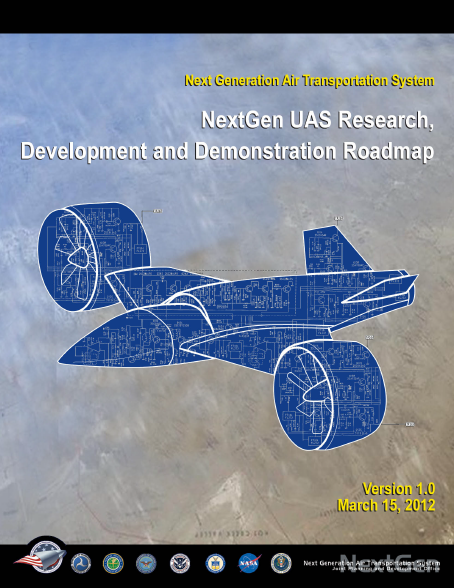 This is the first report of progress in producing a NextGen Unmanned Aircraft Systems Research, Development and Demonstration Roadmap (NextGen UAS RD&D Roadmap). The activity was established to enable a responsive, efficient, timely, coordinated multiagency Research and Development (R&D) effort that will enable the U.S. to realize fully the benefits of Unmanned Aircraft Systems (UAS) in the National Airspace System (NAS).

The use of UAS dates from the earliest days of flight. UAS today play an increasing role in many public missions such as border surveillance, wildlife surveys, military training, weather monitoring, and local law enforcement. However, expansion of domestic UAS operations has been inhibited by lack of a common understanding of what is required to safely and routinely operate UAS in the NAS. Challenges such as the lack of an onboard pilot to see and avoid other aircraft and the wide variation in unmanned aircraft missions and capabilities must be addressed in order to fully integrate UAS operations in the NAS in the NextGen timeframe.

This report represents a significant effort on the part of the Next Generation Air Transportation System (NextGen) partner agencies to establish a multiagency roadmap of the R&D necessary to enable routine operations of UAS in the NextGen NAS. This initial report is intended to accomplish the following objectives:

• Document an initial set of critical R&D challenges that need to be addressed to enable routine access for UAS in the NextGen NAS
• Develop an approach to linking the R&D activities of the partner agencies with the R&D needs of the FAA to support integration of UAS in the NAS
• Establish an approach to coordinating R&D activities of the participating agencies in order to address those challenges
• Identify relevant ongoing and planned R&D projects to serve as a baseline for the NextGen UAS RD&D Roadmap1
• Set forth a series of next steps toward achieving a responsive, vetted roadmap, monitoring progress, and identifying actions needed

The Office of Management and Budget recently tasked the NextGen partner agencies to develop a strategic, multiagency, NextGen UAS RD&D Roadmap with facilitation and assistance from the Joint Planning and Development Office (JPDO). The primary objective was to identify the most critical technology issues involved in establishing a plan for UAS operations. The results are contained in this document, which will serve as a baseline for further development of the Roadmap.

In an effort to plan for the projected growth in UAS operations, the Office of Management and Budget (OMB) tasked the NextGen partner agencies to develop a strategic interagency UAS Research, Development, and Demonstration (RD&D) Roadmap, to be delivered to the by Joint Planning and Development Office (JPDO) September 30, 2011. The JPDO has an interagency focus, coordinating NextGen efforts among the FAA, the National Aeronautics and Space Administration (NASA), the Departments of Commerce (DOC), Defense, and Homeland Security, and the White House Office of Science and Technology Policy (OSTP). The legislation establishing the JPDO3 calls for the organization to guide NextGen research and development by coordinating goals, priorities, and research; facilitating technology transfer, and creating multiagency roadmaps. The same legislation calls for the JPDO to ensure that NextGen can handle a wide range of aircraft operations, such as UAS, to the same high level of safety in the NAS that the FAA demands today. In this context, the JPDO is facilitating and coordinating steps to make sure that all stakeholders have an understanding of the collective agency plans, and to develop clear strategies and requirements for UAS in a NextGen environment. The ultimate goal is to enable a responsive, efficient, timely, coordinated multiagency research and development (R&D) effort that will enable the U.S. to realize fully the benefits of UAS operations in the NAS.

The NextGen Concept of Operations (ConOps)4 was developed by the JPDO to meet the goals and objectives established in the Integrated National Plan for NextGen5 established in response to the Century of Aviation Act.

The ConOps is based on the application of advanced technologies and procedures to increase air traffic management (ATM) system capacity and manage variations in demand and aircraft types, both manned and unmanned, seamlessly civil and public operations. It identifies the following eight major NextGen concepts to achieve NextGen goals and objectives: