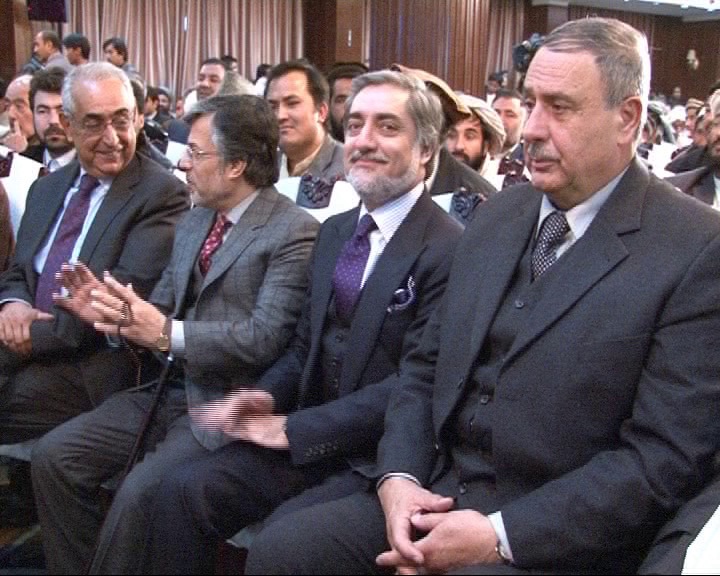 Dr. Abdullah Abdullah, center, head of the National Coalition of Afghanistan (NCA). Prominent members of the NCA and other rival parties have stated that they believe Afghan President Hamid Karzai is strengthening the Taliban in an effort to bolster his own power. Photo via Ariana News.

A recent report from the Director of National Intelligence’s Open Source Center (OSC) indicates that opposition parties increasingly believe that Afghan President Hamid Karzai is strengthening the Taliban in an effort to bolster his own political power.  The report also assesses that members of Karzai’s camp may be willing to work with militant forces to prevent rival political parties from gaining influence.

Prominent members of two major opposition parties, the National Coalition of Afghanistan (NCA) and the National Front of Afghanistan (NFA), have expressed concern about Karzai’s connection with Taliban militants.  At a meeting of the NFA leadership in Kabul in early April, former Vice President Ahmad Zia Massoud warned that the government is “working toward strengthening the terrorist groups” and that this being facilitated by “senior government leaders” who are “trying to facilitate the penetration of the Taliban into the security forces.”

A prominent member of the NCA former parliament speaker Mohmmad Yunos Qanuni recently stated in an interview with a Afghan news outlet that “Karzai’s thoughts are more inclined toward the Taliban than our lot [anti-Taliban forces],” adding that “individuals with pro-Taliban orientations have more of an impact on the president’s mind.”  Qanuni made similar claims in an address to the youth wing of the NCA in April, warning that in an effort to perpetuate their rule, the government leadership is trying to “facilitate the return of terrorism and the Taliban.”

The author of the OSC report assesses that the “Afghan Government’s backing of the Taliban’s opening of an office in Qatar and the Afghan ambassador to Pakistan’s suggestive remarks, in a 3 April interview with UK’s Guardian newspaper, that negotiations would lead to the Taliban’s participation in presidential elections suggests that at least some in Karzai’s camp may be willing to court the militants to countervail the anti-Taliban forces’ influence.”  The report also states that a merger between the NCA and NFA is likely before the 2014 elections, creating “two political, and possibly even militarized, rival clusters” that could have negative effects on the future stability of Afghanistan.