The following document contains approximately two dozen situation briefings reportedly produced by Kenya’s National Intelligence Service on the threat posed to the country by al-Shabaab militants.  The briefings range in date from September 21, 2012 to September 13, 2013. The document was obtained and published by Al Jazeera and has been the basis for articles in the Wall Street Journal as well as local newspapers inside Kenya 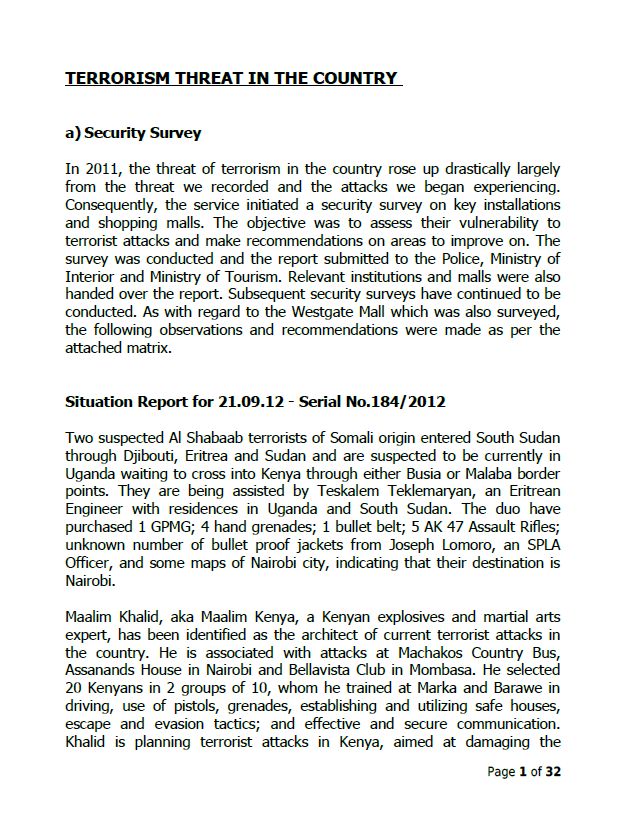 In 2011, the threat of terrorism in the country rose up drastically largely from the threat we recorded and the attacks we began experiencing. Consequently, the service initiated a security survey on key installations and shopping malls. The objective was to assess their vulnerability to terrorist attacks and make recommendations on areas to improve on. The survey was conducted and the report submitted to the Police, Ministry of Interior and Ministry of Tourism. Relevant institutions and malls were also handed over the report. Subsequent security surveys have continued to be conducted. As with regard to the Westgate Mall which was also surveyed, the following observations and recommendations were made as per the attached matrix.

Two suspected Al Shabaab terrorists of Somali origin entered South Sudan through Djibouti, Eritrea and Sudan and are suspected to be currently in Uganda waiting to cross into Kenya through either Busia or Malaba border points. They are being assisted by Teskalem Teklemaryan, an Eritrean Engineer with residences in Uganda and South Sudan. The duo have purchased 1 GPMG; 4 hand grenades; 1 bullet belt; 5 AK 47 Assault Rifles; unknown number of bullet proof jackets from Joseph Lomoro, an SPLA Officer, and some maps of Nairobi city, indicating that their destination is Nairobi.

Maalim Khalid, aka Maalim Kenya, a Kenyan explosives and martial arts expert, has been identified as the architect of current terrorist attacks in the country. He is associated with attacks at Machakos Country Bus, Assanands House in Nairobi and Bellavista Club in Mombasa. He selected 20 Kenyans in 2 groups of 10, whom he trained at Marka and Barawe in driving, use of pistols, grenades, establishing and utilizing safe houses, escape and evasion tactics; and effective and secure communication. Khalid is planning terrorist attacks in Kenya, aimed at damaging the economy, assassination of political and security leaders, and attacking western interests and tourists. Elsewhere, the Al Shabaab is contemplating attacking Kenyan interests in other countries, starting with Zambia, but the timing, target and methods are still unclear. Kenyan interests anywhere in the world therefore remain the militant’s potential targets of attack as the Kenya Defence Forces and AMISOM exert pressure on them, and the imminent capture of Kismayu.

Meanwhile, the following suspected Al Shabaab operatives are in Nairobi and are planning to mount suicide attacks on undisclosed date, targeting Westgate Mall and Holy Family Basilica; Sheikh Abdiwelli Mohamed, Sheikh Hussein and Sheikh Hassan. They are believed to be in possession of two suicide vests, twelve (12) hand grenades and two (2) AK 47 rifles, and have already surveyed the two targets. They are being assisted by Sheikh Hassan alias Blackie of Majengo and Omar Ahmed Ali alias Jerry who are currently staying near Mamba Petrol Station and Huruma Mosque along Juja Road.

Adan Abdulahi Siad aka Ada Gamey, Amniyat Commander dispatched 25 Amniyats operatives on 23.01.13 from Bardere district in Somali, by road to Kenya to conduct grenade attacks against KDF convoys. They are scheduled to pass through Jardani, Fafadun and Damas, about 12 kilometers from El Wak and are under the leadership of Issa Ali. They are armed with AK 47 rifles, pistols and some explosives. They were using a dyna truck driven by Hassan Yare.

Some Al Shabab leaders met at Barawa in Lower Shebelle on 25.01.13 where they discussed plans to send Amniyats operatives into Kenya to conduct assassinations against Somali elders who had participated in the recent constitution process. Dahir Gamey was appointed to co-ordinate the plans.

Other reports indicate that by late December 2012, Al- Shabaab was training female operatives to engage in hijacking of aircrafts and crashing them as well as suicide bombing. Upon completion they were to be sent to western countries and to countries which had contributed troops to AMISOM.

Further to threats by Al-Shabaab militia to carry out retaliatory attacks in Kenya following the recent capture of Kolbio town, some militia’s IED experts have been deployed in Mandera and Bulla Hawa towns in Somalia. The militiamen are planning to plant explosives along the routes used by security personnel and detonate hand grenades in crowded areas including social places and churches.

There are indications that Al Qaida and Al Shabaab operatives are planning to disrupt the upcoming general elections. ABUBAKAR SHARIFF aka ABU MAKABURI is in the forefront of the planning and has been gathering arms in preparation for attacks countrywide. Some of the targets mentioned include VIPS, polling stations on the Election Day and buildings such as Times Towers. Notably, Times Tower has been severally mentioned as being very busy on Mondays and Fridays, and that the security has been observed to be lax.

The envisaged modus operandi include, but is not exclusive to, Mumbai-attack style, where the operatives storm into a building with guns and grenades and probably hold hostages.

Furthermore, several operatives who had gone underground following the December operations have resurfaced and are regrouping in Nairobi and Mombasa.

Briefs to other Relevant Government Agencies and Officials

During the month of September 2013 following a noticeable rise in the level of threat, specific briefs on the threat were made to the following:

i) Briefs to National Security Council members; Briefs were made in the month of September to the following:

Briefs were made to them informing them of increasing threat of terrorism and of plans to launch simultaneous attacks in Nairobi and Mombasa on 13th and 20th September, 2013.

Between the month of September, 2012 and September, 2013, NSAC has been briefed on a number of occasions on the rising threat of terrorism and several recommendations made on the action which needs to be taken.

Briefs to the Cabinet Secretary, Interior and National Coordination

Several briefs have also been made to the Minister for Interior on the threat of terrorism and more detailed report on the threat was submitted on 7th June, 2013.