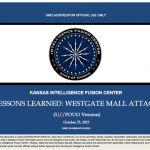 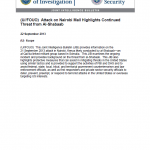 This Joint Intelligence Bulletin (JIB) provides information on the 21 September 2013 attack in Nairobi, Kenya likely conducted by al-Shabaab—an al-Qai‘da linked militant group based in Somalia. This JIB examines the ongoing incident and provides background on the threat from al-Shabaab. This JIB also highlights protective measures that can assist in mitigating threats in the United States using similar tactics and is provided to support the activities of FBI and DHS and to assist federal, state, local, tribal, and territorial government counterterrorism and law enforcement officials, as well as first responders and private sector security officials to deter, prevent, preempt, or respond to terrorist attacks in the United States or overseas targeting US interests. 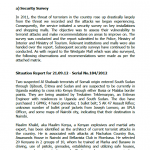 A document containing approximately two dozen situation briefings reportedly produced by Kenya’s National Intelligence Service on the threat posed to the country by al-Shabaab militants. The briefings range in date from September 21, 2012 to September 13, 2013.