The following report from the Kansas Intelligence Fusion Center was posted on the website of the Department of Environment and Health in Johnson County, Kansas.  The story was subsequently removed from the website. 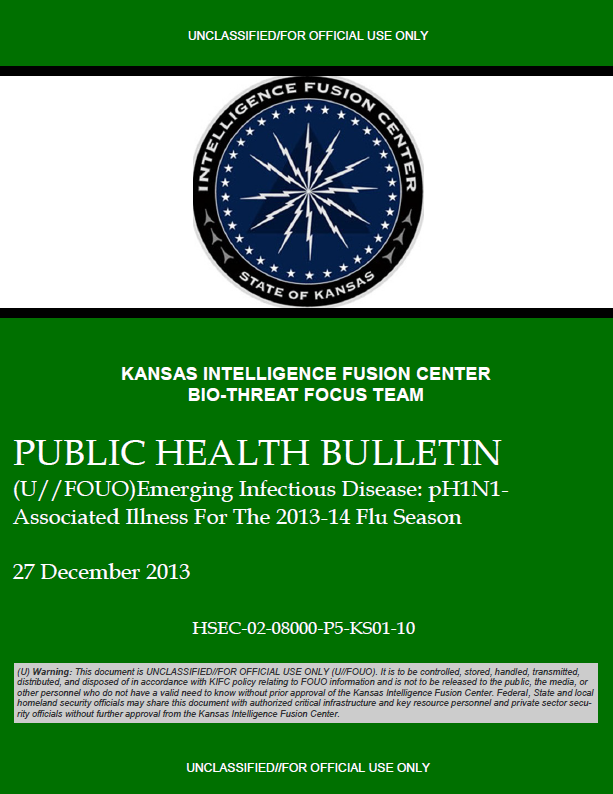 (U//FOUO) There has been a concerning recent steep rise in influenza activity in Texas, as well as an increase in severe pH1N1 patient clusters requiring ventilator support.

(U//FOUO) It is not currently known why 2009 pH1N1 has re-emerged as the dominant strain this year. Early identification of any significant receptor binding domain changes in the severe Texas patients would be helpful to better characterize the cause of the severe pH1N1 clusters occurring these past few weeks.

(U//FOUO) This product was developed for the State of Kansas, but is applicable to other states and regions of the country. We recommend that this product be forwarded for distribution to your State department of health and public health networks as deemed appropriate.

(U//FOUO) From November through December 2013, CDC has received a number of reports of severe respiratory illness among young and middle-aged adults, many of whom were infected with influenza A (H1N1) pdm09 (pH1N1) virus. Multiple pH1N1-associated hospitalizations, including many requiring intensive care unit (ICU) admission, and some fatalities have been reported. The pH1N1 virus that emerged in 2009 caused more illness in children and young adults, compared to older adults, although severe illness was seen in all age groups. While it is not possible to predict which influenza viruses will predominate during the entire 2013- 14 influenza season, pH1N1 has been the predominant circulating virus so far. For the 2013-14 season, if pH1N1 virus continues to circulate widely, illness that disproportionately affects young and middle-aged adults may occur.

(U//FOUO) Texas health investigators have now linked 2 infections in a severe influenza-like illness (ILI) cluster to the 2009 H1N1 virus, and a dramatic flu activity jump in the state has vaulted Texas and 3 other southern states into the “widespread” category for the 1st time this season [2013-14]. The Montgomery County Health District (MCHD), located near Houston, reported a severe ILI cluster that put 8 people in a local hospital, killing 4 of them. Initial tests were negative for flu, which raised speculation about what pathogen was fueling the outbreak. Local media outlets noted that patients in the cluster were middle-aged adults who were reportedly previously healthy, which also ramped up the level of concern. Last week however, the MCHD said further tests now show that 2 of the survivors were infected with the 2009 H1N1 virus [influenza H1N1 pdm9 virus] and that further tests were underway to pinpoint the cause of the other infections.

(U//FOUO) The 2009 H1N1 cases in Montgomery County come at the time of a steep rise in flu in Texas, along with similar spikes in Louisiana, Mississippi, and Alabama, according to the latest update from the US Centers for Disease Control and Prevention (CDC). Most of the flu activity in those states, and the nation as a whole, is linked to the former pandemic virus, which is now considered a seasonal flu strain and has been included in all formulations of flu vaccines since the 2009-10 flu season. Dominant activity from the H1N1 strain stands in stark contrast from last year [2012], when the H3N2 virus was most common and was marked by an early, moderately severe season.

(U//FOUO) Based on recent news reports, as of December 26th, there were 13 confirmed deaths from the H1N1 Flu in the greater Houston area, with the first Texas confirmed pediatric death this week. Additionally, on December 24th at a press conference at Seton Medical Center in Austin TX, hospital officials said in the last two weeks the number of flu patients doubled from about 200 to 400 confirmed cases. And five patients with the pH1N1 virus were put on a special heart-lung machine called an extracorporeal membrane oxygenation (ECMO) to help them breathe. Seton Medical Center, which serves central Texas, has a modern center that includes 5 EMCO machines, which require significant resources. EMCO machines are used for pH1N1 patients who can no long breathe on their own or oxygenate their blood. These functions are assumed by the ECMO machine in a last ditch effort to allow the patient to repair the extensive lung damage and associated complications. The procedure is complex and often requires a team of over 35 physicians, nurses, perfusionists, and respiratory therapists for each individual ECMO case, which does not include the team of lab technicians that provide critical life-saving patient information. Patients require 24-hour care while they are connected to the device, which may last a few days or several weeks.

(U//FOUO) Kansas influenza cases continue to increase these past few weeks, mirroring a rise in ILI reported cases similar to the 2012-2013 influenza season. Though the influenza activity is low throughout Kansas as reported by KDHE, the increasing severe cases in Texas, as well as the high widespread influenza activity throughout Texas and other Southern states suggests that Kansas local health departments and hospitals should be prepared for an increase in influenza patients, especially more severe illnesses requiring additional ventilator support.

(U//FOUO) To date, the CDC has released one set of sequences, A/Texas/36/2013, from a Texas case infected this season. The severity of a subset of cases in eastern Texas has raised concerns that the sequences may have receptor binding domain changes, such as D225G or D225N, which was predicted for severe and fatal cases in Ukraine in 2009. These changes were subsequently identified in severe and fatal cases in other countries, although the CDC noted the early appearance of these changes in milder cases in the spring of 2009. D225G has not been seen in any US cases this season, but was present in an August collection in Utah (A/Utah/08/2013) as well as two Florida cases with June collection dates (A/Florida/13/2013) and (A/Florida/16/2013). Early identification of any significant receptor binding domain changes in the severe Texas patients would be helpful to better characterize the cause of the severe pH1N1 clusters occurring these past few weeks.