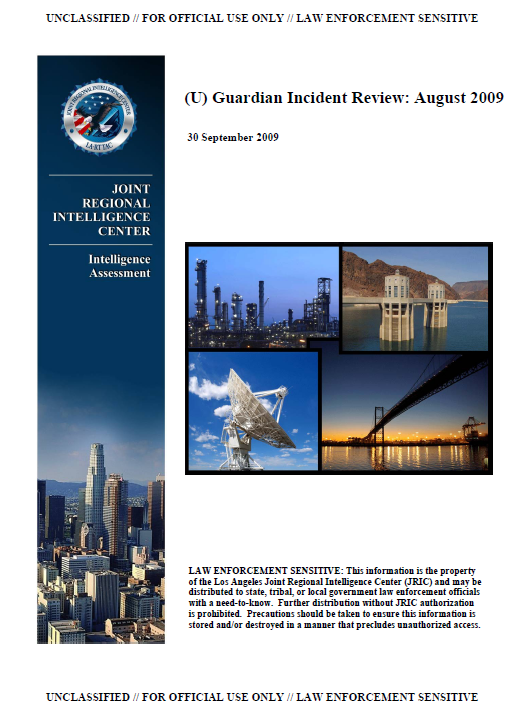 (U) Summary of Findings

(U//FOUO//LES) The number of Guardian incidents reported in August 2009 totaled 109.

(U//FOUO//LES) The Joint Regional Intelligence Center (JRIC) conducted a statistical review of 109 incidents referred to, received by, created by, or assigned to the FBI Los Angeles Field Office (LAFO) between 1 August 2009 and 31 August 2009 and tracked in the FBI’s Guardian database. Duplicate incidents were discarded prior to analysis.

(U) Status and Disposition of August 2009 Guardian Incidents

(U//FOUO//LES) As of 22 September 2009, nearly three quarters of the incidents reported in August (80 of 109) had been investigated by the LAFO Threat Squad and closed. Twenty-nine remained open (representing 26 percent).

(U//FOUO//LES) Fifty-two of the 109 incidents were found to have no nexus to terrorism; twenty-eight were deemed inconclusive. One incident had an identifiable nexus to terrorism. Nine incidents involved Terrorist Screening Center (TSC) hits. Six incidents were referred for follow-up: four to the FBI counter-terrorism unit; and one each to units dealing with criminal activity and possible misuse of chemical/biological/ radiological/nuclear (CBRN) materials.

(U) Overview: Incidents by Activity Type

(U//FOUO//LES) All incidents were manually examined to determine the full scope of activities reported. Many incidents involved more than one activity type; for this reason, activity type totals presented in charts and graphs may occasionally exceed 109.

(U//FOUO//LES) Incidents involving activities in which there was potential for loss of life, injury, or significant property damage were deemed “high-interest.” Four such incidents were recorded in August 2009. An improvised explosive device was left in a mailbox at one residence; a vehicle exploded in the garage of another residence while repair work was being conducted. One instance of sabotage was reported by the rail sector. The remaining incident involved a cyber attack against a business for the purposes of theft.

(U//FOUO//LES) Incidents involving threatening statements or behaviors, potential terrorist fundraising or training, use of hoax devices, trespassing, or theft were deemed “moderate-interest.” Fifty-five such incidents were reported in August 2009.

(U//FOUO//LES) Ten threats of personal injury were reported in August 2009, directed at personnel associated with educational (five) and government (two) facilities; military assets, a casino, and a foreign government facility each reported one incident. Eight trespassing incidents took place, two incidents each at nuclear, energy, and defense facilities, and one incident apiece at port and educational facilities. Six threats mentioned potential terrorist activity; five of these centered on hotels, casinos, and military assets, while one reported a possible visa violation.

(U//FOUO//LES) Six of the suspicious vehicle incidents took place on roads or highways. An additional nine took place at or near assets from the aviation (three), energy (two), government (two), and defense (two) sectors. Personnel from the emergency services sector, defense industrial base, a hotel, and a dam each reported one incident. Four incidents were recorded involving businesses (two), and residences (two). Four of the suspicious vehicle incidents did not involve a critical infrastructure sector.