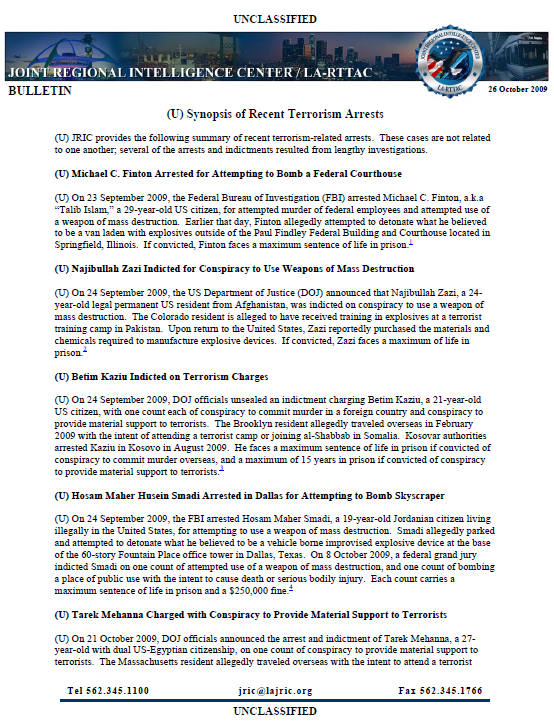 (U) JRIC provides the following summary of recent terrorism-related arrests. These cases are not related to one another; several of the arrests and indictments resulted from lengthy investigations.

(U) Michael C. Finton Arrested for Attempting to Bomb a Federal Courthouse

(U) On 23 September 2009, the Federal Bureau of Investigation (FBI) arrested Michael C. Finton, a.k.a “Talib Islam,” a 29-year-old US citizen, for attempted murder of federal employees and attempted use of a weapon of mass destruction. Earlier that day, Finton allegedly attempted to detonate what he believed to be a van laden with explosives outside of the Paul Findley Federal Building and Courthouse located in Springfield, Illinois. If convicted, Finton faces a maximum sentence of life in prison.

(U) On 24 September 2009, the US Department of Justice (DOJ) announced that Najibullah Zazi, a 24-year-old legal permanent US resident from Afghanistan, was indicted on conspiracy to use a weapon of mass destruction. The Colorado resident is alleged to have received training in explosives at a terrorist training camp in Pakistan. Upon return to the United States, Zazi reportedly purchased the materials and chemicals required to manufacture explosive devices. If convicted, Zazi faces a maximum of life in prison.

(U) On 24 September 2009, the FBI arrested Hosam Maher Smadi, a 19-year-old Jordanian citizen living illegally in the United States, for attempting to use a weapon of mass destruction. Smadi allegedly parked and attempted to detonate what he believed to be a vehicle borne improvised explosive device at the base of the 60-story Fountain Place office tower in Dallas, Texas. On 8 October 2009, a federal grand jury indicted Smadi on one count of attempted use of a weapon of mass destruction, and one count of bombing a place of public use with the intent to cause death or serious bodily injury. Each count carries a maximum sentence of life in prison and a $250,000 fine.

(U) On 21 October 2009, DOJ officials announced the arrest and indictment of Tarek Mehanna, a 27-year-old with dual US-Egyptian citizenship, on one count of conspiracy to provide material support to terrorists. The Massachusetts resident allegedly traveled overseas with the intent to attend a terrorist training camp, and engaged in multiple conversations with his unindicted co-conspirators to attack unidentified shopping malls. Mehanna was previously indicted in January 2009 for making false statements to the FBI. If convicted, Mehanna faces a maximum of 15 years in prison and a $250,000 fine.

(U) The JRIC advises regional public safety agencies to report suspicious activities to leads@lajric.org. For comments, questions, or product requests please contact the JRIC at (562) 345-1100 or jric@lajric.org.