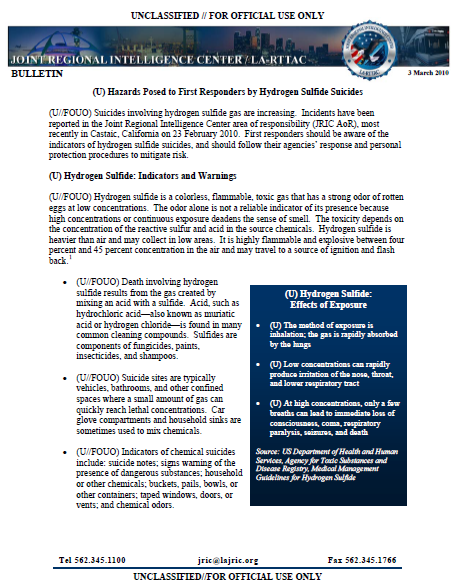 (U//FOUO) Suicides involving hydrogen sulfide gas are increasing. Incidents have been reported in the Joint Regional Intelligence Center area of responsibility (JRIC AoR), most recently in Castaic, California on 23 February 2010. First responders should be aware of the indicators of hydrogen sulfide suicides, and should follow their agencies’ response and personal protection procedures to mitigate risk.

(U) Hydrogen Sulfide: Indicators and Warnings

(U//FOUO) Hydrogen sulfide is a colorless, flammable, toxic gas that has a strong odor of rotten eggs at low concentrations. The odor alone is not a reliable indicator of its presence because high concentrations or continuous exposure deadens the sense of smell. The toxicity depends on the concentration of the reactive sulfur and acid in the source chemicals. Hydrogen sulfide is heavier than air and may collect in low areas. It is highly flammable and explosive between four percent and 45 percent concentration in the air and may travel to a source of ignition and flash back.

(U//FOUO) Death involving hydrogen sulfide results from the gas created by mixing an acid with a sulfide. Acid, such as hydrochloric acid—also known as muriatic acid or hydrogen chloride—is found in many common cleaning compounds. Sulfides are components of fungicides, paints, insecticides, and shampoos.

(U//FOUO) Indicators of chemical suicides include: suicide notes; signs warning of the presence of dangerous substances; household or other chemicals; buckets, pails, bowls, or other containers; taped windows, doors, or vents; and chemical odors.

(U) The method of exposure is inhalation; the gas is rapidly absorbed by the lungs

(U) Low concentrations can rapidly produce irritation of the nose, throat, and lower respiratory tract

(U) At high concentrations, only a few breaths can lead to immediate loss of consciousness, coma, respiratory paralysis, seizures, and death

(U) Use in Suicides

(U) Suicide by hydrogen sulfide is more common in Japan, but incidents are increasing in the United States, with one of the most recent within the JRIC AoR:

(U) On 23 February 2010, a Los Angeles County sheriff’s deputy found a vehicle parked near a remote stretch of Lake Hughes Road in Castaic. A woman in the back seat appeared to be non-responsive, and computer printouts, warning of hazardous chemicals, had been taped over the car’s windows. The victim, a resident of West Covina, had recently been reported missing. The deputy notified the Santa Clarita Valley sheriff’s station, which dispatched a HazMat squad.

(U) On 12 February 2009, a San Jose, California 911 dispatcher received a call about an attempted suicide by an 18-year-old male. First responders found two pans containing an unidentified chemical mixture on abedroom table. Because it was not immediately identified, staff at Santa Clara Valley Medical Center, where the victim had been transported, closed the emergency room for nearly five hours as approximately 100 persons believed to have been exposed to the chemical underwent decontamination procedures. The victim never regained consciousness and died on 14 February 2009.

(U) In August 2008, law enforcement and fire units responded to a suicide involving hydrogen sulfide in Pasadena, California. The victim, found in his car, had mixed fungicide and toilet bowl cleaner in a plastic tray. First responders reported seeing a tray with “bright blue liquid” in the back seat of the vehicle. The man had placed a note to warn first responders. Investigation indicated that he might have visited one or more of the numerous Japanese Web sites that provide information on how to commit suicide using hydrogen sulfide.

(U) Implications for First Responders

(U//FOUO) Hydrogen sulfide is a lethal chemical that can be harmful to first responders even at low concentrations. First responders should be aware of the possibility of encountering hydrogen sulfide when responding to reported suicides. If a chemical substance is suspected, officers should follow their agencies’ hazardous materials operational protocols and procedures; take appropriate personal protection measures including respiratory protection; and request assistance from appropriate HazMat entities.