Lobbying the Executive Branch: Current Practices and Options for Change 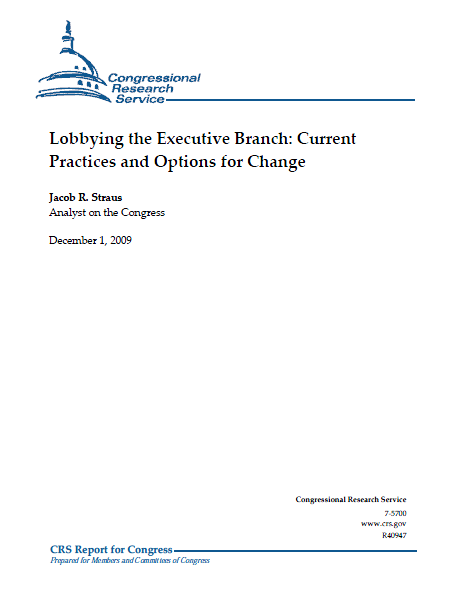 Under the Lobbying Disclosure Act (LDA) of 1995, as amended, individuals are required to register with the Clerk of the House of Representatives and the Secretary of the Senate if they lobby either legislative or executive branch officials. In January 2009, Secretary of the Treasury Timothy Geithner placed further restrictions on the ability of lobbyists to contact executive branch officials responsible for dispersing Emergency Economic Stabilization Act (EESA, P.L. 110-243) funds. Subsequently, President Barack Obama and Peter Orszag, Director of the Office of Management and Budget (OMB), issued a series of memoranda between March and July 2009
that govern communication between federally registered lobbyists and executive branch
employees administering American Recovery and Reinvestment Act of 2009 (P.L. 111-5) funds.
Most recently, in October 2009, the White House directed executive agencies to prohibit, when
possible, the appointment of federally registered lobbyists to federal advisory bodies and
committees.

The Recovery and Reinvestment Act lobbying restrictions focus on both written and oral
communications between lobbyists and executive branch officials. Pursuant to the President’s
memoranda, restrictions have been placed on certain kinds of oral and written interactions
between federally registered lobbyists and executive branch officials responsible for Recovery
Act fund disbursement. The President’s memoranda require each agency to post summaries of
oral and written contacts with lobbyists on dedicated agency websites. EESA regulations are
virtually identical.

This report outlines the development of registration requirements for lobbyists engaging
executive branch officials since 1995. It also summarizes steps taken by the Obama
Administration to limit and monitor lobbying of the executive branch; discusses the development
and implementation of restrictions placed on lobbying for Recovery Act and EESA funds;
examines the Obama Administration’s decision to stop appointing lobbyists to federal advisory
bodies and committees; considers third-party criticism of current executive branch lobbying
policies; and provides options for possible modifications in current lobbying laws and practices.
For further analysis on lobbying registration and disclosure, see CRS Report RL34377, Honest
Leadership and Open Government Act of 2007: The Role of the Clerk of the House and the
Secretary of the Senate, by Jacob R. Straus; CRS Report RL34725, “Political” Activities of
Private Recipients of Federal Grants or Contracts, by Jack Maskell; and CRS Report R40245,
Lobbying Registration and Disclosure: Before and After the Enactment of the Honest Leadership
and Open Government Act of 2007, by Jacob R. Straus.

Creation of restrictions on federally registered lobbyists’ access to executive branch departments
and agencies has already changed the relationship between lobbyists and covered executive
branch officials. If desired, there are additional options which might further clarify lobbyists’
relationships with executive branch officials. These options each have advantages and
disadvantages for the future relationships between lobbyists and governmental decision-makers.
CRS takes no position on any of the options identified in this report.

If current disclosure requirements are not determined to be sufficient to capture program level
lobbying activity, or if current executive branch restrictions were made permanent, the Lobbying
Disclosure Act could be amended to institute provisions similar to current executive branch
lobbying restrictions. Currently, lobbyists must file quarterly disclosure reports with information
on their activities and covered officials contacted. In addition, the LDA, as amended by the
Honest Leadership and Open Government Act of 2007, requires federally registered lobbyists to
file semi-annual reports on certain campaign and presidential library contributions.64 The
disclosure requirements might be further amended to cover program specific disbursement
information. Changes to the LDA would require the introduction and passage of a bill by
Congress, as well as the President’s signature.