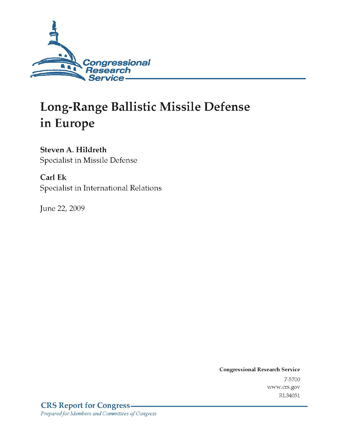 Successive U.S. governments have urged the creation of an anti-missile system to protect against long-range ballistic missile threats from adversary states. The Bush Administration believed that North Korea and Iran represented strategic threats, and questioned whether they could be deterred by conventional means. The Bush Administration’s position on this issue remained unchanged, even after the intelligence community assessed that the Iranian nuclear weapons program halted in 2003. The Bush Administration built long-range missile defense bases in Alaska and California to protect against missile threats, especially from North Korea. Although the system has been tested, most agree that further testing is necessary. Additionally, the Bush Administration proposed deploying a ground-based mid-course defense (GMD) element of the larger Ballistic Missile Defense System (BMDS) in Europe to defend against an Iranian missile threat. The system would include 10 interceptors in Poland, a radar in the Czech Republic, and another radar deployed in a country closer to Iran, all to be completed by 2013 at a reported cost of at least $4 billion.

The proposed U.S. system has encountered resistance in some European countries and beyond. Critics in Poland and the Czech Republic assert that neither country faces a notable threat from Iran, but that if American GMD facilities were installed, both countries might be targeted by missiles from rogue states—and possibly from Russia. The Bush Administration signed agreements with both countries permitting GMD facilities to be stationed on their territory; however, the two countries’ parliaments continue to wait on ratifying the accords, in part, until after the Obama Administration clarifies its intentions on missile defense policy. NATO has deliberated long-range missile defense, and has taken actions that some interpret as an endorsement of the U.S. GMD system.

The GMD plan has also affected U.S.-Russia relations. Former President Putin and his successor, Vladimir Medvedev, have argued that the proposal would reignite the arms race and upset U.S.- Russian-European security relations. U.S. officials dispute Russia’s objections, noting that the interceptors are intended to take out Iranian missiles aimed at Europe or the United States and could not possibly act as a deterrent against Russia. Some argue that Russia has been attempting to foment discord among NATO allies. In mid-2007, Russia offered to cooperate on missile defense, proposing the use of a Russian-leased radar in Azerbaijan, but urging that U.S. facilities not be built in Eastern Europe. President Bush welcomed the idea in principle, but insisted upon the need for the European sites. Despite ongoing discussions over the issue, sharp Russian criticism of the program has continued.

For FY2008, Congress examined the European GMD proposal and eliminated proposed funding for initial site construction pending formal agreement with Poland and the Czech Republic, independent studies on missile defense options for Europe, and DOD certification of the proposed interceptor. The FY2009 request for the European site was $712 million, which Congress largely
supported with funding for site construction available only after Czech and Polish ratification. The Obama Administration proposed $50.5 million for the European site for FGY2010, which with the $618 million remaining and available from the FY2009 budget pending Polish and Czech ratification, the Administration believes is sufficient for the time being.

The Bush Administration regarded both countries as unpredictable and dangerous, and did not believe they could be constrained by traditional forms of military deterrence, diplomacy, or arms control. On a trip to attend a meeting of NATO foreign ministers in early December 2007, Secretary of State Rice told reporters: “I don’t see that the NIE changes the course that we’re on” to deploy a European missile defense system.9 Accompanying her on the trip, Undersecretary of State John Rood, lead U.S. negotiator for the European missile defense talks, added: “the missile threat from Iran continues to progress and to cause us to be very concerned…. Missile defense would be useful regardless of what kind of payload, whether that be conventional, chemical, biological, or nuclear.”

According to long-standing unclassified U.S. intelligence assessments, Iran may be able to test an ICBM (Intercontinental Ballistic Missile) or long-range ballistic missile capability by 2015 if it receives foreign assistance, such as from Russia or China. Many in Congress and elsewhere share this specific assessment, or that the potential threat may not emerge by 2015 but is sufficiently worrisome to address it now. Many therefore believe it prudent to move forward with plans to deploy a long-range missile defense system in Europe to defend U.S. forward deployed forces in Europe, friends and allies, and the United States against long-range ballistic missile threats. Some in the larger international security policy and ballistic missile proliferation community argue that
evidence of an Iranian ICBM program is scant and unpersuasive. Additionally, the Iranian government reports (which cannot be verified) that Iran only has a limited missile capability with a range of about 1,200 miles11 and that it has stopped development of ICBM range missiles. Nonetheless, Iran continues to test ballistic missiles, some of which are capable of reaching as far as NATO’s Southern Flank (i.e., Turkey). Also, Iran recently successfully tested a short-range ballistic missile using solid rocket motors, a development many see as indicative of Iran’s interest in building longer range ballistic missiles.

Although some Europeans have expressed concern about Iran’s suspected nuclear weapons program, some U.S. friends and allies in Europe continue to question the Administration’s assessment of Iran’s potential ICBM threat or of Iran’s threat to Europe itself.. Hence, some question the need for a GMD element of the U.S. BMDS in Europe. In December 2008, the European Council of the European Union approved a two-year study of ballistic missile proliferation trends. More recently, MDA Director Gen. O’Reilly testified before Congress12 that MDA’s projections of the threat from long-range ballistic missiles from rogue nations was off “by a factor of 10-20.”

The U.S. Department of Defense began deploying long-range missile interceptors in Alaska and California in late 2004 to address long-range missile threats primarily from North Korea. Currently, the U.S. GMD element of the BMDS includes more than two dozen silo-based interceptors in Alaska and several in California. As part of an integrated Ballistic Missile Defense System (BMDS) capability, the United States also has a number of ground-based radars in operation around the world, space-based assets supporting the BMDS mission, command and control networks throughout the United States and the Pacific, as well as ground-mobile and seabased systems for shorter-range BMD.

What remained necessary as part of the global BMDS, according to the Bush Administration, was an ability in the European theater to defend against intermediate-to-long-range ballistic missiles launched from Iran. The Department of Defense (DOD) argued it was important to U.S. national security interests to deploy a GMD capability in Europe to optimize defensive coverage of the United States and Europe against potential threats both into Europe and against the United States. There have not been a large number of intercept flight tests of the deployed GMD element. Nonetheless, the Bush Administration and many U.S. military leaders expressed confidence in the deployed system.13 Nonetheless, most agree there is the need for further operational testing. Some observers continue to question how much confidence there should be in the system’s potential operational or combat effectiveness based on the types of tests conducted and the test results to
date.

The current GMD program began flight tests in 2002. This effort was built on several earlier long-range BMD programs with decidedly mixed results themselves since the early 1980s. Since 2002, a number of GMD intercept flight tests have taken place with mixed results.14 In each of these tests, most all other flight test objectives were met.

In 2002, the GMD moved to the operational booster and interceptor. The interceptor system flew two developmental tests in 2003 and 2004, and the GMD element of the BMDS was deployed in late 2004 in Alaska and California. Two planned intercept flight tests of the new configuration for December 2004 and February 2005 were not successful. After technical review, the interceptor successfully demonstrated a booster fly-out in 2005. In September 2006, a successful flight test exercise of the GMD element as deployed took place. (Although a missile intercept was not planned as the primary objective of this data collection test, an intercept opportunity occurred and the target warhead was successfully intercepted.) Additional intercept flight tests of the deployed
element whose primary objectives were intercepts of long-range ballistic missile targets were originally scheduled for later in 2006, but then subsequently postponed. Then a May 2007 intercept test was scrubbed when the target missile failed to launch as planned. A follow-on attempt scheduled for summer 2007 was completed successfully on September 29, 2007. The Missile Defense Agency reported a successful intercept in December 2008, but some were critical of this assessment as the test objective was for the intercept to occur amidst a field of decoys, which decoys failed to deploy from the test target.