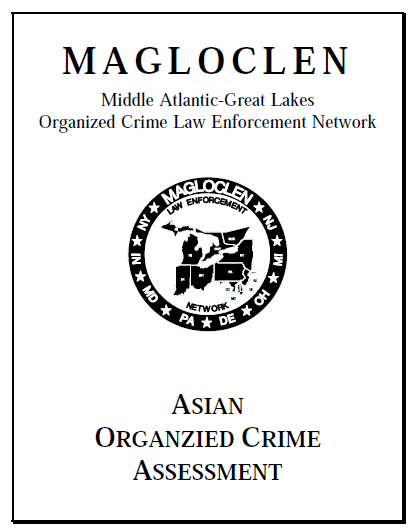 When traditional organized crime was introduced to American and Canadian societies, law enforcement was forced to alter existing investigation methods in order to successfully challenge the presence of a structured criminal group. Through the years, policing styles and theories have been developed based on organized crime, and specialized units have been created to concentrate on this criminal activity. The passing of the Racketeering Influenced and Corrupt Organization Act in 1970 greatly impacted organized crime and accounts for the depletion of some of the major groups formerly operating in the United States. Federally-funded programs, such as the Regional Information Sharing System (RISS) Centers, including the Middle Atlantic-Great Lakes Organized Crime Law Enforcement Network (MAGLOCLEN), were established to gain control of criminal groups, and keep abreast of current intelligence involving the many facets of organized criminal activity.

Due to this disparity, one of the most important aspects in an effective investigation of Asian organized criminal groups is to build a strong working knowledge of the Asian people, as well as the Asian culture. Any comprehensive organized crime investigation is designed, in part, to uncover all aspects of a designated group of individuals, and their actions. This concept is better known to law enforcement as due diligence. In the case of an investigation into Asian criminal activity, the due diligence encompasses an understanding of the mindset of Asian individuals.

Many immigrants from Asia have a predisposed distrust of law enforcement based on the atrocities they have experienced or witnessed in their native countries. Here in North America, Asian immigrants are, at best, skeptical of American law enforcement. This mindset hinders vital communication between law enforcement and the victims of Asian organized crime. For law enforcement to overcome this hurdle, it will take time and involve exceeding the scope of typical policing.

Another phenomenon of Asian organized criminals is their ability to mobilize criminal activities and elude authorities. This notion has challenged law enforcement like never before. In many cases, a multi-agency approach is not only beneficial, but essential to perform any effective type of investigation of an Asian criminal group. Extensive traveling, even internationally, is a primary characteristic of such groups. Furthermore, their ability to network with criminal associates from other regions enhances the intricacy and stability of their operation. The same type of networking must be developed by law enforcement in order to compete with Asian criminal groups and make an impact on the extent of their criminal activities.