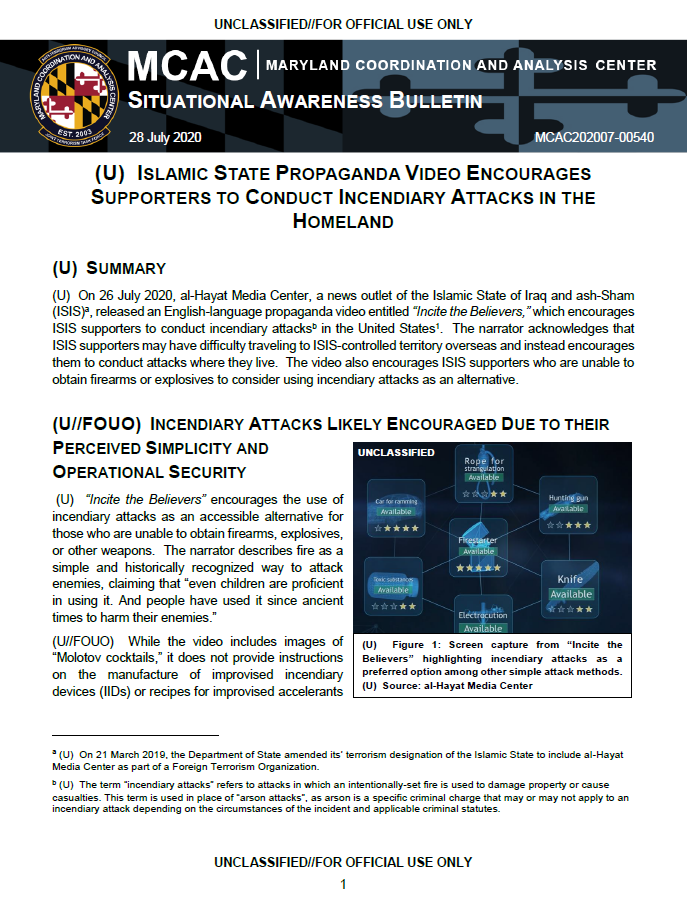 (U) On 26 July 2020, al-Hayat Media Center, a news outlet of the Islamic State of Iraq and ash-Sham (ISIS), released an English-language propaganda video entitled “Incite the Believers,” which encourages ISIS supporters to conduct incendiary attacks in the United States. The narrator acknowledges that ISIS supporters may have difficulty traveling to ISIS-controlled territory overseas and instead encourages them to conduct attacks where they live. The video also encourages ISIS supporters who are unable to obtain firearms or explosives to consider using incendiary attacks as an alternative.

(U) “Incite the Believers” encourages the use of incendiary attacks as an accessible alternative for those who are unable to obtain firearms, explosives, or other weapons. The narrator describes fire as a simple and historically recognized way to attack enemies, claiming that “even children are proficient in using it. And people have used it since ancient times to harm their enemies.”

(U//FOUO) While the video includes images of “Molotov cocktails,” it does not provide instructions on the manufacture of improvised incendiary devices (IIDs) or recipes for improvised accelerants (such as improvised napalm); but instead focuses on readily available ignition sources such as matches and/or lighters.

• (U//FOUO) While these simple ignition sources are likely to be less effective than IIDs or improvised accelerants, these methods require fewer precursor materials and no chemistry experience, and are likely perceived as a safer option to avoid law enforcement detection. MCAC assesses that it is very unlikely that the purchase of matches or lighters will result in suspicious activity reporting, decreasing the likelihood that a plot could be disrupted by law enforcement prior to execution.

• (U//FOUO) Unlike plots involving IIDs or improvised accelerants, incendiary attacks using simple ignition methods require no pre-operational manufacturing. This likely decreases the chances that the attacker is injured prior to the attack and increases the likelihood of successful execution.

(U//FOUO) The narrator also instructs potential attackers to dispose of ignition sources and other evidence following an attack in order to avoid law enforcement detection. This may increase the attractiveness of incendiary attack tactics for those ISIS supporters who are less willing to risk death or arrest/capture.

(U) VIDEO PRIMARILY FOCUSES ON TARGETING THE AGRICULTURE SECTOR, BUT OTHER TARGET LOCATIONS ARE REFERENCED

(U) The most prevalent tactics highlighted in the video are arson attacks targeting wildlands or agriculture. The video depicts several significant wildfires in recent history as evidence of the effectiveness of incendiary attacks, including:

(U) The only specific location in the US referenced in the video is the State of California, which is marked with an “X” on a map.

(U) Shortly before the end of the video, a graphic depicts four specific target types; including forests, agricultural fields, factories, and buildings.

(U) The video does not encourage the targeting of fire department personnel or equipment, including water supply infrastructure.

• (U) In May 2019, a series of large fires destroyed numerous agricultural fields and damaged power plants, oil fields, and refineries in Syria and northern Iraq. ISIS claimed responsibility for these attacks through their Amaq news outlet, some of which have been verified to have been ignited by ISIS through independent reporting.
• (U) Between May 2018 and July 2018, FTOs, including Hamas, have utilized improvised incendiary devices (IIDs) attached to balloons and kites to ignite wildfires in Israeli-controlled regions of the Gaza Strip. During that time, over 1,500 acres of agricultural and open lands were burned.
• (U) In January 2017, ISIS released the fifth issue of Rumiyah magazine. The featured article “Just Terror Tactics” included instructions for the manufacture of improvised napalm and highlighted potential target locations for incendiary attacks.
• (U) In March 2013, al-Qa’ida in the Arabian Peninsula (AQAP) released the tenth issue of Inspire magazine, which provided instructions on conducting incendiary attacks targeting vehicles. The ninth issue of Inspire, which was released in 2012, encouraged followers to ignite wildfires.

(U//FOUO) MCAC assesses that FTOs will very likely continue to release propaganda encouraging incendiary attacks in the Homeland; but that these propaganda releases are unlikely to impact the tactics and targets chosen by FTO-inspired attackers.

• (U) According to the National Counterterrorism Center (NCTC), between September 2001 and January 2019, there has been only one successful FTO inspired, enabled, or directed incendiary attack in the United States.

o (U) In February 2018, a Minnesota woman was arrested on charges of attempting to provide material support to terrorism, making false statements, and arson following a series of small fires on the campus of St. Catherine University in Minneapolis, MN. Prosecutors allege that the suspect ignited several small fires on the campus. Investigators also believe the suspect wrote at least one letter in which she attempted to recruit fellow students to “join al-Qa’ida, Taliban, or al Shabaab”.

(U//FOUO) MCAC remains concerned that a successful incendiary attack in the Homeland resulting in significant loss of life or property damage (conducted by either foreign or domestic violent extremists) may serve as a “proof of concept” for the effectiveness of this attack method. Such an attack could inspire violent extremists to adopt this tactic on a more widespread basis.

(U//FOUO) MCAC has no information to indicate that ISIS supporters or supporters of other FTOs are actively planning to conduct incendiary attacks in the State of Maryland.

(U//FOUO) MCAC encourages Fire/EMS personnel, including fire investigators, to report incendiary fires that may have a potential terrorism nexus to the MCAC Watch for further analysis