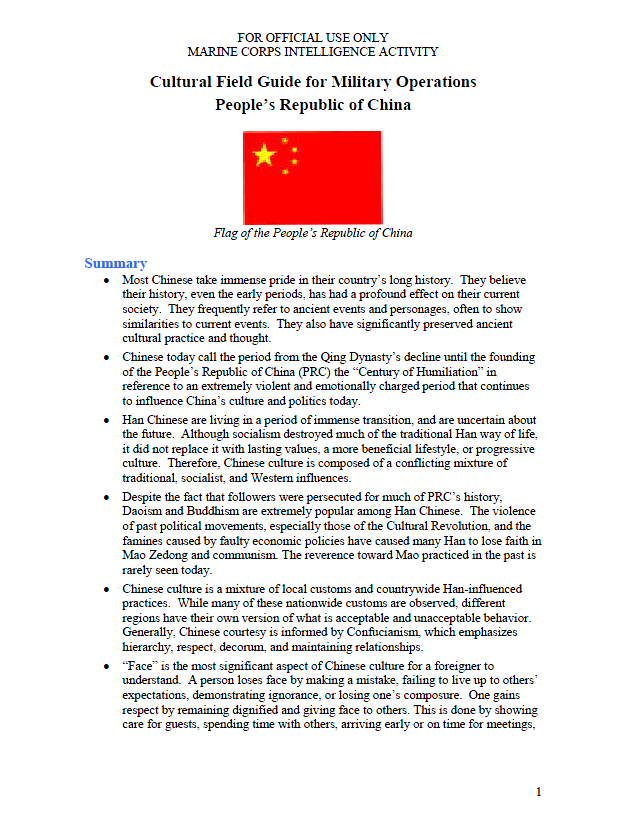 Most Chinese take immense pride in their country’s long history. They believe their history, even the early periods, has had a profound effect on their current society. They frequently refer to ancient events and personages, often to show similarities to current events. They also have significantly preserved ancient cultural practice and thought.

Chinese today call the period from the Qing Dynasty’s decline until the founding of the People’s Republic of China (PRC) the “Century of Humiliation” in reference to an extremely violent and emotionally charged period that continues to influence China’s culture and politics today.

Han Chinese are living in a period of immense transition, and are uncertain about the future. Although socialism destroyed much of the traditional Han way of life, it did not replace it with lasting values, a more beneficial lifestyle, or progressive culture. Therefore, Chinese culture is composed of a conflicting mixture of traditional, socialist, and Western influences.

Despite the fact that followers were persecuted for much of PRC’s history, Daoism and Buddhism are extremely popular among Han Chinese. The violence of past political movements, especially those of the Cultural Revolution, and the famines caused by faulty economic policies have caused many Han to lose faith in Mao Zedong and communism. The reverence toward Mao practiced in the past is rarely seen today.

Chinese culture is a mixture of local customs and countrywide Han-influenced practices. While many of these nationwide customs are observed, different regions have their own version of what is acceptable and unacceptable behavior. Generally, Chinese courtesy is informed by Confucianism, which emphasizes hierarchy, respect, decorum, and maintaining relationships.

“Face” is the most significant aspect of Chinese culture for a foreigner to understand. A person loses face by making a mistake, failing to live up to others’ expectations, demonstrating ignorance, or losing one’s composure. One gains respect by remaining dignified and giving face to others. This is done by showing care for guests, spending time with others, arriving early or on time for meetings, praising someone in front of that person’s superior, and ignoring others’ mistakes in public.

Lifestyles vary throughout the country because different areas, families, and even individuals receive often-conflicting influences. Rural areas are characterized by their more traditional lifestyle, poverty, and difficulty in obtaining proper nourishment and medical care. Most middle-aged and young people in urban areas are attracted by Western culture and, in general, have a better quality of life.

Chinese culture is a mixture of local, ethnic customs and nationwide Han-influenced practices. While many of these nationwide customs should be observed, different areas may have their own version of what is acceptable and unacceptable behavior. Generally, Chinese courtesy is informed by Confucianism, which emphasizes respect, decorum, and maintaining relationships. Although many Han Chinese will forgive foreigners for simple mistakes, the best way to be taken seriously by Chinese is to carefully observe the concept of face, a kind of ritualized respect that is expressed through careful observance of etiquette.

Most Chinese shake hands when meeting a foreigner. It is polite when meeting a professional acquaintance to present one’s business card with both hands to every person in the room; it is impolite to leave someone out or to present the card with only one hand. When receiving another person’s card, one should take it with both hands and make a show of looking at it before carefully putting it away. It is rude to treat another person’s business card with disrespect. For example, one should not fold another’s business card, take notes on, or tear it. Titles are extremely significant in China. If one is not sure how to address an acquaintance, it is polite to ask. In a business relationship, the Chinese say the person’s surname or full name followed by his or her title.

Chinese people may smile or laugh when they are embarrassed, nervous, or worried. They will often point with their middle fingers, as it is rude to point with the index finger. Chinese point to the nose when pointing to themselves, not the chest. Waving all fingers with the palm down means “come here,” while waving the hand from side to side horizontally with the fingers pointed upward means “no.” The “thumbs up,” “thumbs down,” “peace,” and “OK” hand signs are used exactly as they are in the United States.

The most important protocol to follow when visiting is the guest’s arrival and departure. A good host will greet the visitor at the point of arrival—at the airport or train station if the person is from out of town or at the threshold of the house or office. When the visitor leaves, the host will send him or her off from the same place. In some homes, guests should remove their shoes before entering. It is polite for guests to bring a gift to the host, usually fruit, candy, alcohol, or a bouquet of flowers.

Before formal negotiations both sides usually meet at a banquet, at which they may or may not discuss business. The negotiation meetings usually start with easy topics and a few concessions to show generosity and cultivate trust in the relationship. One should strive to establish mutual respect for mutual benefit. Begin with the points both sides can agree with easily and then work slowly toward more difficult issues. It is important to leave room for compromise and concession.

Bargaining is almost considered a sport in China. Except in large stores where prices are listed on each item, bargaining is expected. Especially at roadside stands and outdoor markets, one should assume that the price may be lowered.

Chinese culture emphasizes conflict avoidance. When disagreements occur between family, friends, or coworkers, both parties will seek a compromise quickly. Only rarely will they allow a conflict to come out into the open. Instead the parties will discuss it in an indirect fashion. With the influence of Western rule of law and business practices, formal mediation processes have gained acceptance among urban professionals. Communist Party officials or other local authorities may mediate between individuals in both rural and urban areas.

It is difficult to tell a Chinese person’s real feelings because they often hide their emotions for the sake of being polite. Friendship is maintained through reciprocity, such as taking turns paying for meals, giving gifts, and doing favors.

Maintaining good relationships with one’s counterparts and always treating others with respect are fundamental business practices. Many Chinese businesspeople consider a good relationship a better guarantee than a contract or laws because the trust and common ground gained from a relationship indicates a commitment to work together. The Chinese pay attention to hierarchy. It is important for a person of equal status to meet and send off visitors; sending someone of lower rank is a sign of disrespect. Chinese courtesy specifies that interrupting others; demonstrating anger, impatience, or confusion; or saying “no” are a loss of face. Flattery is a part of the business relationship. Foreigners should expect their Chinese counterparts to complement them, especially in the initial stages of the relationship, and should show modesty by politely refusing compliments. Chinese instructions to their subordinates are often vague and indirect, but still carry authority.

The Han in urban areas are meticulous about arriving on time because arriving late shows serious disrespect. In rural areas, time is more flexible because traveling conditions are often poor.

The Chinese take a practical view of death as a natural part of life. Many believe that the soul continues to exist in some form after death.

Chinese courtesy is connected to the concept of face, or showing respect, and maintaining relationships. Face, which is similar to the American concept of protocol, is the most significant aspect of Chinese culture for a foreigner to understand. A person loses face by making a mistake, failing to live up to others’ expectations, demonstrating ignorance, or losing one’s composure. One gains face by remaining dignified and by giving face to others. This is done by showing care for guests, spending time with others, arriving early or on time to meetings, praising someone in front of that person’s superior, and ignoring others’ mistakes in public. Many Chinese view face as more significant than truth; given the option of one over the other, many Chinese will choose to save their own face or that of the person to whom they are speaking rather than tell the complete truth.

Connections, called guanxi, are extremely significant in China. The term refers to both familial and friendship ties and also to useful connections that one cultivates, such as those with powerful businesspeople or Party cadres. To have a trusting professional or private relationship with a Chinese person it is important to cultivate a connection. One may build relationships by giving face and by doing and then asking for favors to create a feeling of indebtedness.

Conditions in China are generally more unsanitary than they are in the United States, and many Chinese throw their trash onto the street. Most Chinese try to keep their own homes clean.