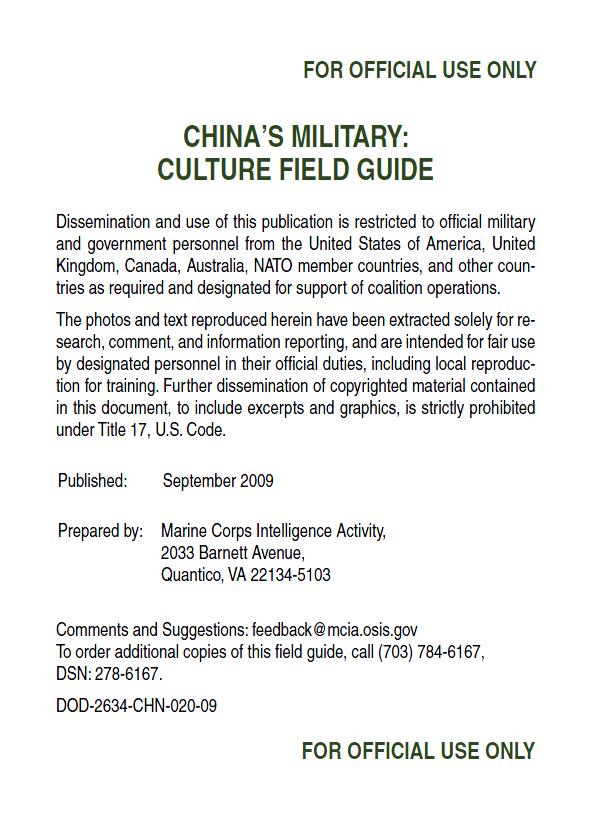 The field guide presents background information to show China’s military mind-set through its history, values, and internal dynamics. It also contains practical sections on lifestyle, customs, and habits. For those seeking more extensive information, MCIA produces a series of cultural intelligence studies on China’s military that explores the dynamics of China’s military culture at a deeper level.

The People’s Liberation Army (PLA) is the world’s largest standing army; it protects the world’s fastestrising economic power. In recent years, U.S. personnel have gained a much greater understanding of the PLA’s equipment and capabilities. However, knowledge of the values, beliefs, and essential cultural features that influence the way PLA members behave, interact, and make decisions is much less widespread. This field guide is aimed at U.S. personnel who will interact with Chinese military personnel but have limited knowledge of China or the PLA. The guide is intended to help readers better understand why PLA members act as they do and how the PLA differs from the U.S. military. This guide is divided into three parts. “Who is the PLA?” provides background on the PLA’s structure and personnel and discusses how the PLA is transforming itself.“How the PLA Sees Itself” traces the beliefs the PLA promotes about its origins, historical legacies, and key values. “Understanding PLA Actions” describes key aspects of PLA behavior, including its changing operational practices and its decision-making principles and processes, and discusses how U.S. personnel can most effectively interact with PLA members.

The PLA is a Party-Army: its missions, institutions, and practices are all shaped by the fact that its ultimate loyalty is to the Chinese Communist Party (CCP).

Change is a key element of PLA culture. The PLA is undergoing tremendous changes in its personnel system and its operational doctrine and practices. It is experiencing the “growing pains” of its transformation from a peasant army to a modern military. The PLA promotes the view that its greatest strengths are the morale and discipline of its personnel, and that these qualities enable the PLA to compensate for weak material capabilities. However, PLA leaders worry that these “human qualities” are increasingly difficult to maintain in a rapidly changing society.

U.S. personnel are often frustrated by the different expectations that the PLA and the U.S. military bring to military-to-military interactions. However, U.S. personnel can improve the quality of these exchanges by gaining an understanding of the PLA’s professional and cultural norms and an appreciation of what its members seek to gain from interaction with the U.S. military. 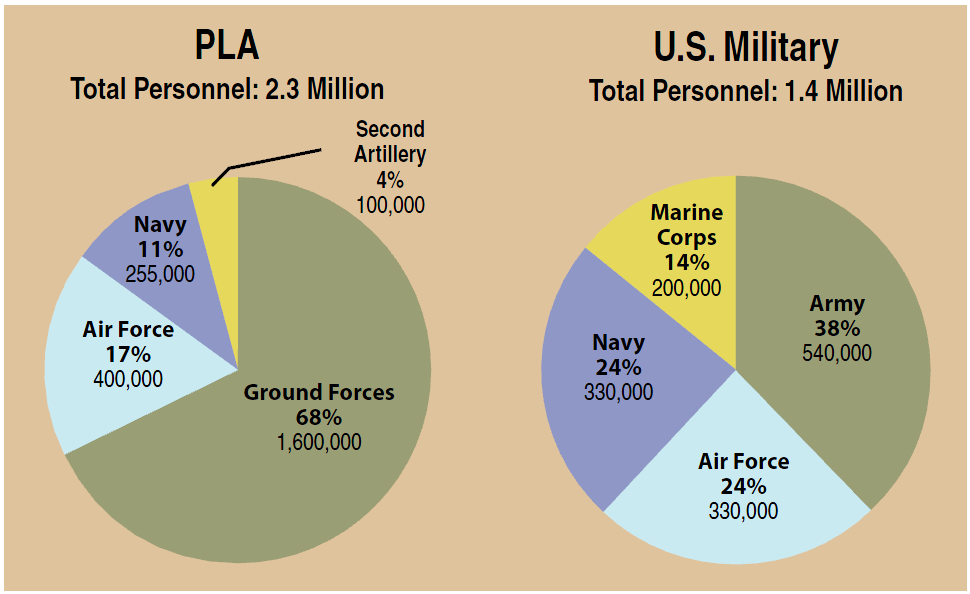 Looking for a Few Good Men

According to a popular saying in imperial China, “Just as good iron is not forged into nails, good men do not become soldiers.” Today’s PLA faces immense difficulties in attracting the “good men” it needs in order to build the high-quality fighting force it wants. Based on the demands of 21st century warfare, the PLA now seeks:

● Conscripts from urban, educated backgrounds
● Officers who are better educated and more technically capable
● Personnel who are innovative and willing to take risks

However, due to recent changes in Chinese society, young people with strong skills have a wide range of opportunities in the private sector or overseas. Despite reforms to the personnel system, PLA leaders remain concerned that the PLA has too many:

● Conscripts who are rural, uneducated, and poor
● Officers who stay too long in their positions and are too slow to adapt to new techniques and technologies
● Personnel (particularly officers) who are conservative and risk averse

● In 2002 China’s official news service reported that most PLA barracks finally had year-round electricity, heat, air conditioning, and indoor plumbing.
● In 2003 a PLAN depot reported that it was rethinking its earlier refusal to install air conditioning in the quarters for NCOs’ visiting family members. This refusal had resulted from concerns that if the quarters were too comfortable, family members would stay too long.
● In 2005 a PLAAF newspaper proudly reported that a tactical unit had installed 17 new showers, so that the troops could have one hot shower per week.
● In 2006 the leaders of a Second Artillery unit, concerned that unit personnel would be “tempted” by the bars and markets of a nearby town, built a wall around the unit compound to keep personnel inside. Personnel simply climbed over it to go into town, for such purposes as calling their families and taking uniforms to the dry cleaners.

Today’s PLA members—and Chinese citizens more generally—still display a sense of wounded pride over what they call the “Century of Humiliation,” the period between 1840 and 1949 when China lost sovereignty, power, and human lives to foreign invaders. Because of these bitter memories, Chinese resistance to foreign interference is very strong. PRC leaders and intellectuals interpret many U.S. actions as evidence that the United States is determined to keep China from gaining global influence.

The CCP actively encourages the PLA to distrust foreign intentions. For instance, President Hu Jintao, in a 2004 speech on the PLA’s main tasks, warned that “Western hostile forces have not given up the wild ambition of trying to subjugate us, intensifying the political strategy of westernizing and dividing up China.” U.S. guests of the PLA may be surprised to find their hosts questioning the intentions of the U.S. government and people toward China during seemingly unrelated conversations.