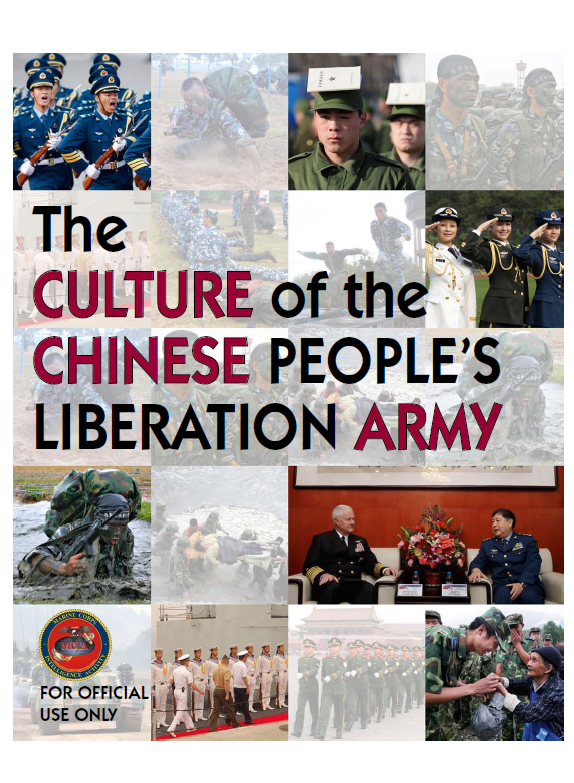 The Culture of the Chinese People’s Liberation Army

This study examines the military culture of the Chinese People’s Liberation Army (PLA). It focuses on the following:

Change is a central feature of present-day Chinese military culture. The PLA has transformed itself from a mass peasant army to a modern military in just a few decades, and now seeks to further transform to meet the needs of 21st century warfare. These shifts require PLA leaders to examine whether traditional values and organizational structures are compatible with modern demands. This study describes both those aspects of PLA culture that are regarded as central to the PLA’s identity and those that are currently undergoing rapid transformation.

The research for this study draws upon the following sources:

• PLA publications, including service newspapers, official histories, and leadership manuals
• Chinese- and English-language scholarly studies and policy analyses of the PLA
• Interviews conducted with U.S. military and DoD personnel who have interacted with the PLA.

PLA and Chinese Communist Party (CCP) leaders express great pride in China’s ancient military traditions, which they believe are far richer than those of the West. PLA publications draw extensively on these traditions for principles and lessons relevant to current needs.

• PLA leaders draw on the teachings of ancient military thinkers, especially Sun Tzu (Sunzi), for operational and strategic lessons.
• PLA leaders also draw on classic martial novels such as Romance of the Three Kingdoms and Water Margin as important sources of strategic principles and models of heroism and loyalty.
• PLA texts implicitly draw on the Confucian view of relationships as a framework for how PLA members should interact, although this influence is seldom acknowledged.

The PLA teaches that China’s martial traditions are uniquely moral and defensive.

The PLA instructs its personnel that they are the heirs to a martial tradition that:

• Is defined by an emphasis on morality
• Draws its support from the common people
• Is defensive in orientation
• Prefers to avoid direct combat when there are other ways to prevail
• Focuses on strategic and tactical cleverness over physical or material superiority.

The values and organizational structures of the PLA have been deeply influenced by principles of Marxism-Leninism and Mao Zedong Thought.

Many of China’s early Communist military leaders were trained in Leninist theoretical and organizational principles at the Whampoa Military Academy in the 1920s. Mao Zedong later modified these ideas to give them a more populist orientation, creating what came to be known as “Marxism-Leninism-Mao Zedong Thought.” This body of thought provided the foundation for many of the PLA’s central principles, including the following:

• The Party-Army principle: The Party has absolute control over the armed forces.
• Mass mobilization: All of society should participate in the revolutionary tasks of the Party and support the undertakings of the armed forces.

• Broad consultation, limited participation: Ordinary people’s opinions and concerns should be included in Party decisions, but their direct participation in decision-making should be limited.
• Voluntarism: Human willpower can overcome great material disadvantage.

The PLA uses a selective interpretation of modern Chinese history to mold the worldview and self-image of its personnel.

The PLA has developed distinctive beliefs about its own history, which give weight to the PLA’s present-day tasks. (These beliefs do not always match those of outside observers.) The PLA teaches its members the following lessons about modern Chinese history:

• Foreign nations have long sought to deny China her sovereignty.
• The PLA and the CCP “saved” China from foreign aggression, domestic tyranny, and economic backwardness.
• The PLA has won every war it has fought, even when it has faced much larger and more advanced adversaries.
• The PLA has only waged war when forced to do so, and has always fought in a distinctly moral and defensive fashion.

The PLA’s Emphasis on Morality

Throughout its history, the PLA has claimed that its greatest advantage lies in the moral, political, and spiritual excellence of its troops.

Mao and other early Communist military leaders saw war as the supreme test of the human spirit and believed that strength of character, not advanced weaponry or equipment, was the decisive factor in warfare.

This belief grew out of necessity: in its early days, the PLA (then known as the Red Army) was quite weak in material capabilities. Its leaders had to rely instead on the “human factor” – the physical, moral and political superiority of its troops, expressed through their honesty, discipline, and hard work – as its comparative advantage. The Red Army’s surprising successes against materially superior enemies in the Chinese civil war and in World War II cemented its leaders’ belief that moral and personal qualities of individual servicemembers can indeed shortcomings in other areas.

Despite any developments or acquisitions it has made in the last decade, today’s PLA still views itself as materially outmatched by the U.S. and other militaries, and continues to emphasize the importance of building its human capital to compensate for these shortcomings.

The PLA teaches its members that it has a special obligation to treat people humanely and equitably.

The PLA considers itself a “people’s army” that draws its strength from the support of the common people, and it teaches that this support was crucial to its past victories. Its leaders assert that the PLA must both defend the Chinese people in wartime, and aid them in their daily lives during peacetime. It considers this focus on the needs of the people to be a central aspect of its identity, setting it apart from foreign militaries and from previous, non-communist, Chinese armies.

This principle manifests itself in two beliefs:

The PLA sees itself as a beacon of moral values to Chinese society as a whole. PLA texts stress that members of the Chinese military must be morally better than average people. PLA publications emphasize the need for officers to model good behavior and moral rectitude for the soldiers under their command, and for PLA personnel to secure civilian support for PLA missions by acting as models of socialist ethics.

To ensure that its personnel fulfill their obligations to each other and to society, the PLA has developed a number of moral and disciplinary codes.

These codes include the following:

• The “Three Main Rules of Discipline and Eight Points of Attention” (late 1920s) guided soldiers’ interactions with civilians. This code required the Red Army to project the image of a benevolent force working to minimize the impact of military activity on civilian life. PLA personnel still consider these to be fundamental guidelines for military-civilian relations.
• The “Servicemen’s Moral Standards” (2001) were aimed at defining the PLA’s core values and shaping interactions among personnel.

The PLA is a “Party-Army” controlled by the CCP at all levels.

Central to the PLA’s organizational culture is its identity as a “Party-Army.” Party control of the military is as fundamental to the PLA as civilian control is to the U.S. military.

Central features of the Party-Army are:

• Absolute allegiance to the Party above all else. PLA members swear loyalty to the Chinese Communist Party, not to the Chinese State.
• Centralized Party command.
o The PLA’s national command authority (the Central Military Commission, or CMC, of the Central Committee of the Chinese Communist Party) is a Party organization.
o Party structures exist at all levels of the PLA and play a central role in unit-level decisions.
• Weak state authority. State institutions also have little power over the Chinese military.
o There is a State CMC, but it is a “shell” organization whose membership is usually identical to that of the Party CMC.
o The Ministry of National Defense (MND) exists mostly for protocol purposes and to organize exchanges with foreign militaries. Its Minister is a powerful individual, but his power comes not from his state position but from his positions in the top echelons of the Party.
• Dual leadership. All PLA units are led jointly by a military commander and a political officer. These two officers are considered co-equals and exercise joint leadership over the unit.
• A comprehensive system of Party organizations and “political work.” Political officers and Party committees oversee the day-to-day implementation of “military political work” at every level of the PLA. Political work is the primary mode by which the PLA:
o Carries out the Party’s objectives
o Manages its human resources
o Manages its relations with the civilian population
o Conducts many aspects of training, indoctrination, and wartime activities to co-opt, coerce, or undermine enemy forces. 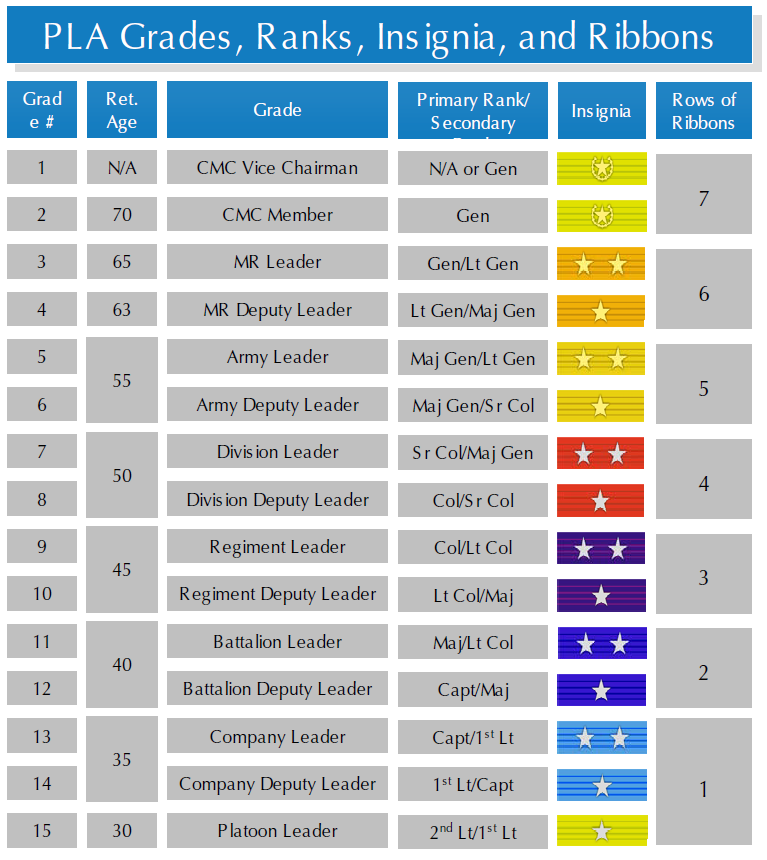