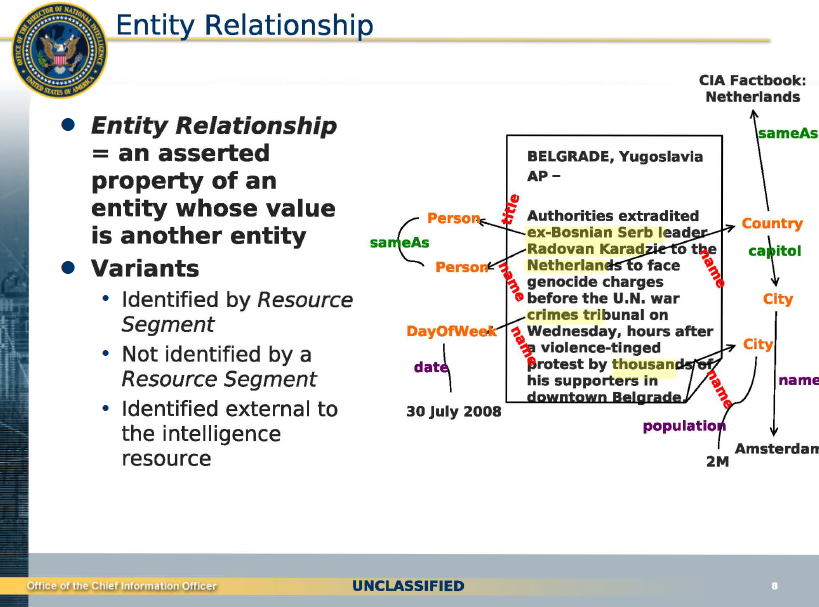 A slide from a presentation by the Chief Information Officer of the Office of the Director of National Intelligence depicts examples of "entity extraction" and "relationship extraction" from a piece of intelligence.

The Office of the Director of National Intelligence (ODNI) is building a computer system capable of automatically analyzing the massive quantities of data gathered across the entire intelligence community and extracting information on specific entities and their relationships to one another.  The system which is called Catalyst is part of a larger effort by ODNI to create software and computer systems capable of knowledge management, entity extraction and semantic integration, enabling greater analysis and understanding of complex, multi-source intelligence throughout the government.

The intelligence community has been working for years to develop software and analytical frameworks capable of large-scale data analysis and extraction. Technological advances have now made it possible for spy agencies to not just capture the incredible amount of data flowing through public and private networks around the world, but to parse, contextualize and understand the intelligence that is being gathered.  Automated software programs are now capable of integrating data into semantic systems, providing context and meaning to names, dates, photographs and practically any kind of data you can imagine.

Many agencies within the intelligence community have already created systems to do this sort of semantic integration.  The Office of Naval Intelligence uses a system called AETHER “to correlate seemingly disparate entities and relationships, to identify networks of interest, and to detect patterns.”  The NSA runs a program called APSTARS that provides “semantic integration of data from multiple sources in support of intelligence processing.”  The CIA has a program called Quantum Leap that is designed to “find non-obvious linkages, new connections, and new information” from within a dataset. Several similar programs were even initiated by ODNI including BLACKBOOK and the Large Scale Internet Exploitation Project (LSIE).

Catalyst is an attempt to create a unified system capable of automatically extracting complex information on entities as well as the relationships between them while contextualizing this information within semantic systems.  According to its specifications, Catalyst will be capable of creating detailed histories of people, places and things while mapping the interrelations that detail those entities’ interactions with the world around them. A study conducted by IARPA states that Catalyst is designed to incorporate data from across the entire intelligence community, creating a centralized repository of available information gathered from all agencies:

To fully grasp the capabilities of such a system, it is important to understand the concepts of “semantic integration” and “entity extraction” that Catalyst will perform.  Using an example described in the IARPA study, we will follow data through the stages of processing in a Catalyst system:

Once entities and their associated relationship values are determined, the information is then integrated into a knowledge base to produce a semantic graph:

Data that has been extracted and integrated can then produce patterns that determine unknown relations between an entity and other entities that may be of concern to a particular intelligence agency:

While this example only provides a limited view of Catalyst functionality, it nonetheless helps to demonstrate the potential capabilities of the system.  Far more detailed explanations of the system, as well as a useful overview of similar government systems across the intelligence community, are provided in IARPA’s one-hundred and twenty-two page study.