The following report was authored by Lockheed Missiles & Space Company in July 1976 for NASA and covers the potential uses of drones by civil society, providing examples of these uses and discussing the potential issues with integrating “remotely piloted” aircraft into the national airspace. 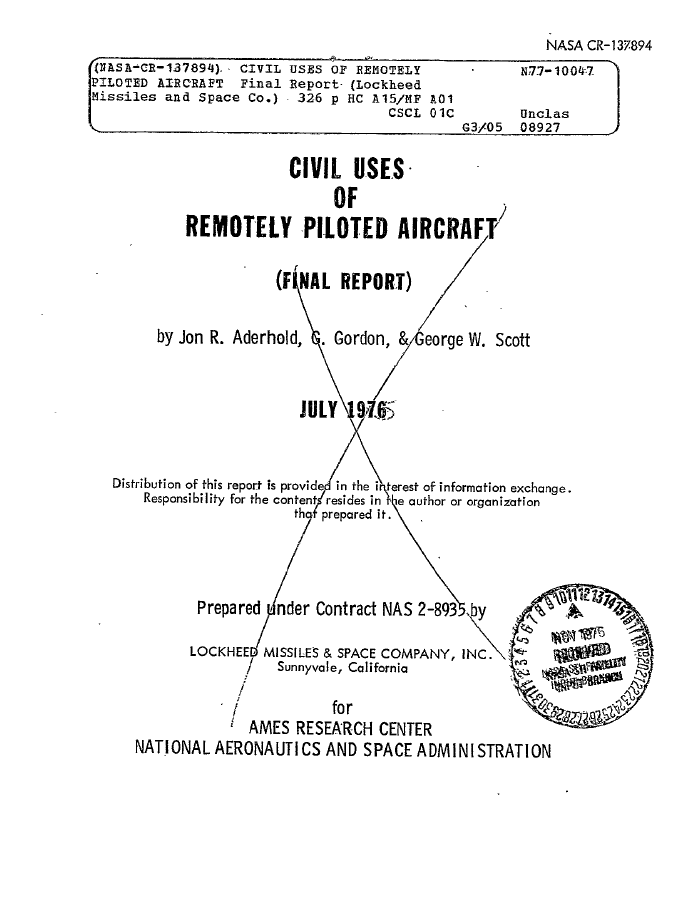 In recent years, all three military services have demonstrated many promising uses of remotely piloted aircraft (or Remotely Piloted Vehicles, RPVs, as they are commonly called). The technologies required for reliable real-time remote operation of complex functions have been considerably advanced by these military programs as well as by the space programs and Remotely Piloted Research Vehicle (RPRV) programs of the National Autonautics and Space Administration. If this technology base can be adapted for civil use in RPVs at an acceptable cost and with proper safety and environmental impact, a major new field of aeronautical applications may very well emerge.

Early investigations of this possibility were done in-house by NASA-Ames Research Center, and the indications were sufficiently encouraging to lead to the contracted study by the Lockheed Missiles and Space Company, Inc. (LMSC), that is reported here. Although this modest study does not resolve all the unknowns about RPVs in civil applications, the indications continue to be encouraging.

The intent of this study is to identify and assess the technology effort required to bring the civil uses of RPVs to fruition and to determine whether or not the potential market is real and economically practical, the technologies are within reach, the operational problems are manageable, and the benefits are worth the cost.

To do so, the economic, technical, and environmental applications are examined. Breadth, rather than depth, of coverage is emphasized. The time frame for the application is 1980-85.

o Identify and describe the potential civil markets for RPVs, and indicate where they may have their earliest civil applications.

o Assess the benefits and cost of using RPVs in civil applications, and compare their effectiveness with conventional or established methods.

o Identify likely candidate vehicle and system concepts and the technology required to satisfy a major portion of these markets.

There are two classes of potential RPV use that are omitted from the study. The first is the high-altitude, broad-area monitoring and mapping job presently being done with LAND SAT satellites and U-2 aircraft. This use is relatively mature and its technologies are already rather well known.  The second is the RPRV intended to simulate a specific advanced aircraft configuration and obtain aerodynamic data historically obtained in manned flight tests. Again, the technologies are already being pursued vigorously and have already produced valuable results (Reference 1).

JMSC devotes principle attention in this study to federal (non-military) and state government agencies as potential civil users of RPVs, while also including an appropriate sample of industrial users from the private sector. The original reasons for this emphasis, which were confirmed in the course of the market survey, are as follows:

o The broad set of federal and state agencies who might use RPVs is already very conducive to formulation of a large “market” base.

o The private sector and government agencies need-equipment rugged enough and safe enough to operate for many years in severe weather, dust, vibration, heat, and rough handling. The private sector will want warranties of performance and serviceability in these tough environments, and these will not evolve easily for RPVs unless federal government agencies have first been involved heavily in the research and development which provides rugged and serviceable equipment.

Potential uses defined.–The more-than-sixty interviews, plus other less intensive contacts, resulted in 35 specific potential civil uses being defined for RPVs. With one or two exceptions, these were found to fall into natural groupings of missions that place similar performance demands on an Table 1 shows the 35 uses, listed in their natural groupings. 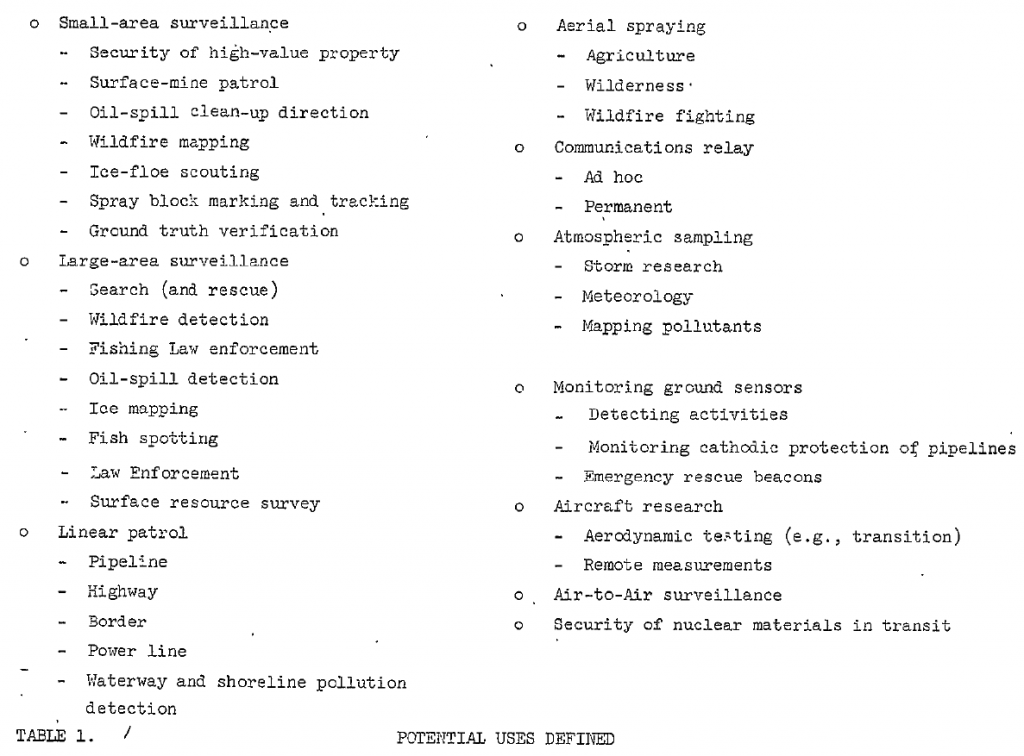 Under “large-area surveillance”: The visual “search” portion of a search-and-rescue operation might well be done by an RPV system augmenting manned systems, especially at sea where a lifeboat or floating wreckage offers good contrast against the background. Aerial detection of wildfires consists of flying over large areas of forest, brush, or grasslands with infrared (-R) sensors to detect and locate small, latent-stage fires such as those started by lightning. Federal, state, and local agencies conduct aerial law enforcement operations to provide traffic advisories, to assist ground units in identifying and preventing criminal acts, to direct ground units to intercept fleeing suspects, as well as to conduct search and rescue missions. Surveys of surface resources are made by aerial photography and by airborne instruments such as magnetometers. Fishing law enforcement by aerial observation is concerned with detecting illegal fishing by foreign ships in U.S.-regulated waters. Present methods may need to be augmented if the present 12-mile limit is extended to 200 miles. Oil spills at sea along coastal shipping lanes or from unattended offshore pumping stations may require aerial patrol for timely detection and correction. Winter shipping on the Great Lakes is aided by airborne radar imagery of ice area boundaries and ice thickness. The purpose of fish spotting is to find and identify schools of fish in the ocean and direct commercial fishing boats to them. 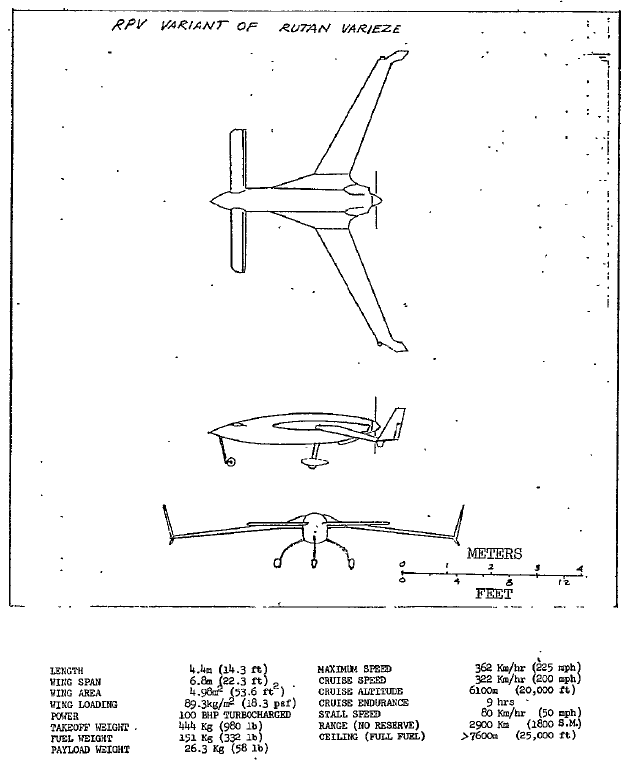