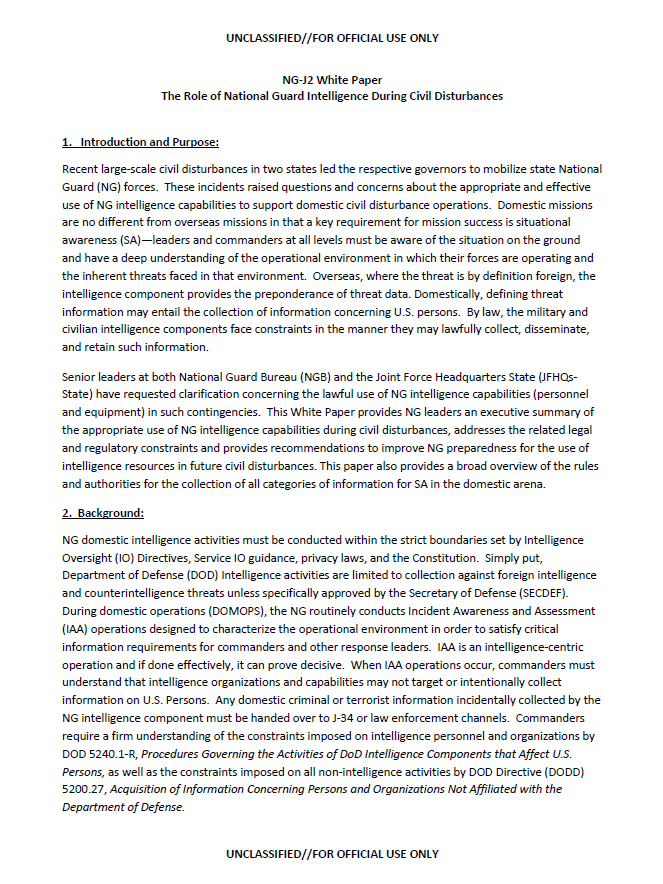 Recent large-scale civil disturbances in two states led the respective governors to mobilize state National Guard (NG) forces. These incidents raised questions and concerns about the appropriate and effective use of NG intelligence capabilities to support domestic civil disturbance operations. Domestic missions are no different from overseas missions in that a key requirement for mission success is situational awareness (SA)—leaders and commanders at all levels must be aware of the situation on the ground and have a deep understanding of the operational environment in which their forces are operating and the inherent threats faced in that environment. Overseas, where the threat is by definition foreign, the intelligence component provides the preponderance of threat data. Domestically, defining threat information may entail the collection of information concerning U.S. persons. By law, the military and civilian intelligence components face constraints in the manner they may lawfully collect, disseminate, and retain such information.

Senior leaders at both National Guard Bureau (NGB) and the Joint Force Headquarters State (JFHQs-State) have requested clarification concerning the lawful use of NG intelligence capabilities (personnel and equipment) in such contingencies. This White Paper provides NG leaders an executive summary of the appropriate use of NG intelligence capabilities during civil disturbances, addresses the related legal and regulatory constraints and provides recommendations to improve NG preparedness for the use of intelligence resources in future civil disturbances. This paper also provides a broad overview of the rules and authorities for the collection of all categories of information for SA in the domestic arena.

NG domestic intelligence activities must be conducted within the strict boundaries set by Intelligence Oversight (IO) Directives, Service IO guidance, privacy laws, and the Constitution. Simply put, Department of Defense (DOD) Intelligence activities are limited to collection against foreign intelligence and counterintelligence threats unless specifically approved by the Secretary of Defense (SECDEF). During domestic operations (DOMOPS), the NG routinely conducts Incident Awareness and Assessment (IAA) operations designed to characterize the operational environment in order to satisfy critical information requirements for commanders and other response leaders. IAA is an intelligence-centric operation and if done effectively, it can prove decisive. When IAA operations occur, commanders must understand that intelligence organizations and capabilities may not target or intentionally collect information on U.S. Persons. Any domestic criminal or terrorist information incidentally collected by the NG intelligence component must be handed over to J-34 or law enforcement channels. Commanders require a firm understanding of the constraints imposed on intelligence personnel and organizations by DOD 5240.1-R, Procedures Governing the Activities of DoD Intelligence Components that Affect U.S. Persons, as well as the constraints imposed on all non-intelligence activities by DOD Directive (DODD) 5200.27, Acquisition of Information Concerning Persons and Organizations Not Affiliated with the Department of Defense.

Before discussing the rules concerning the collection, retention and dissemination of information within the homeland, it is important to understand that there are two distinct groups of Guardsmen who collect information. Each group must operate according to its own authorities and rules. The first group is generally composed of Intelligence personnel and equipment assigned to the J2, A2 and G2; the second group, the National Guard at large (non-intelligence component) to include Domestic Operations (J3/G3/A3); Command, Control, Communications and Computers (J6/G6/A6); and Military Police and Security Forces personnel. Because each has its own authorities and rules, it is imperative that commanders and leaders direct their requests for information to the appropriate group.

C. U.S. Person: A U.S. citizen, born in the U.S. or naturalized; an alien known by the DOD intelligence component concerned to be a permanent resident alien; an unincorporated association substantially composed of U.S. citizens or permanent resident aliens; or a corporation incorporated in the U.S., unless it is directed and controlled by a foreign government or governments.

During DOMOPS, Title 32 NG intelligence personnel may leverage their Title 32 training Mission Essential Task Lists (METL) tasks and non-intelligence equipment to provide SA of the operational environment so long as it is not for the purpose of targeting, or collecting on, any specific U.S. Persons. They may monitor foreign threats to the NG/DOD and all-hazards threats (natural and manmade disasters and incidents). This includes lines of communication analysis; key and critical infrastructure status and vulnerabilities; movements of large crowds (not specific U.S. Persons); the erection of street barriers; the location of citizens or incident responders in distress (consent of the U.S. Person is implied in these circumstances); geographical location of the large-scale destruction of property (e.g., arson and looting); attempts by foreign terrorist organizations to exploit vulnerabilities during DOMOPS, even when foreign actors have played no role in the incident; and the effects of weather and terrain on planning and operations. Any domestic criminal or terrorist information concerning specific U.S. persons incidentally collected by NG intelligence personnel in the routine performance of their duties must be handed over to the J-34 or law enforcement officials. Based on their understanding of the operational environment, NG intelligence personnel should play a key role in the formulation of Priority Intelligence Requirements, Commander’s Critical Information Requirements, and Friendly Forces Information Requirements.

Governors may also leverage the military intelligence (MI) skills of NG intelligence personnel under State Active Duty (SAD) with non-Federal Intelligence equipment or State equipment. While they are not subject to the DOD IO or DODD 5200.27 rules in a SAD status, all NG personnel are subject to the provisions of State law, to include Privacy Laws when it comes to collecting, using, retaining and disseminating U.S. Persons information. Consultation with the State Judge Advocate is highly recommended. Federal intelligence equipment and facilities may only be used in a SAD status with SECDEF approval.

During DOMOPS, NG non-intelligence personnel may leverage their Title 32 training METL tasks and non-intelligence equipment to provide SA of criminal and domestic threat emanating from U.S. Persons and foreign nationals (NDA-affiliated persons) to the NG and DOD.

A. IAA: IO rules and other domestic imagery policy universally apply to the collection, use, retention and dissemination of domestic imagery and other geospatial information for SA purposes, known as IAA. The imagery and geospatial information must be necessary to carry out an authorized mission and must not be for the purpose of targeting any specific U.S. Person without consent.

The National Geospatial Intelligence Agency (NGA) is responsible for satellite (commercial, tactical and national) imagery collection policy. Higher-level approval is not required for the use of domestic commercial satellite imagery and other geospatial information. However, its use must be necessary for carrying out a valid mission, and the J2/G2/A2 must maintain on file an internal Memorandum for Record certifying its proper use, or that IO rules are being followed.

Imagery collected during DOMOPS may be provided/shared with other DOD entities (to include NGB) and civil authorities (to include state authorities) as required based on validated need. Civil authorities are authorized to disclose or release selected Unclassified-For Official Use Only (FOUO) imagery products to participating or affected private citizens when the disclosure/release would prevent injury or loss of life and/or facilitate disaster mitigation and recovery efforts. Specific imagery products may be released to the U.S. media during senior official press conferences to provide visual depiction of disaster area status and disaster response activities. Incidentally collected images that indicate a crime has been or is being committed may be passed to law enforcement officials. However, altering the course of an airborne sensor from an approved IAA collection track to loiter over suspected criminal activities would no longer be incidental collection and is not authorized.

Important Caveat! The discussion above of IAA support during DOMOPS presumes that the intelligence organizations and non-intelligence assets or SECDEF-approved intelligence assets are supporting a military commander deployed as part of the interagency incident response team. If intelligence personnel or assets are supporting law enforcement organizations directly for any purpose, then the supported law enforcement agency (LEA) must request authorization from the SECDEF under Procedure 12 of DOD 5240.1-R. Information and analysis produced by intelligence personnel and assets for a supported LEA under a SECDEF-approved Procedure 12 request must be turned over entirely to that LEA and may not be retained on DOD systems.

D. Social Media: Large volumes of useful information can be obtained via social media during domestic response. NG personnel may monitor social media using organizational accounts to meet an increased need for overall SA. The J3 may report on the domestic and criminal threat. The J2 may report on the all-hazards and foreign threats. The PAO may use social media to assess and report on the public sentiment, both to develop strategic communications for CNGB, and to maintain conversancy with public media trends and directions. 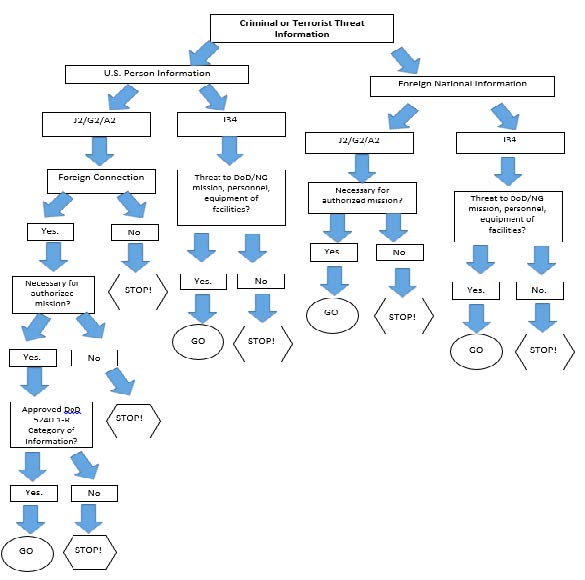 Whether originating from intelligence or non-intelligence personnel, all U.S. persons information collected, retained and disseminated must be clearly identified as such in all products (e.g., e-mails, reports, and briefings) in accordance with DOD 5240.1-R and DODD 5200.27. E-mails and the front cover of reports and briefings with U.S. Persons information will carry the banner:

“FOUO – Information provided contains U.S. persons information. DODD 5200.27 and DOD 5240.1-R must be followed. Only distribute to those with the appropriate clearance and need to know.”

Additionally, the first time a U.S. person is mentioned in an e-mail, report or briefing, it must be identified as “USPER”.

7. Summary and Way Ahead:

IAA can be a decisive force multiplier during domestic response operations. As such, the NG intelligence enterprise must maintain focus on mastery of this complex mission set. That mastery will only be realized through training and education efforts. Training must focus on intelligence personnel, operational commanders and response leaders. The NG J2 Joint IAA Team (JIT) Course has trained over 500 personnel on how to legally and effectively employ intelligence capabilities during all-hazard DOMOPS. In addition, NG-J2 has conducted MI-focused staff assistance visits to 53 of the 54 States and Territories to ensure a thorough understanding of IO requirements. J2 must continue to educate senior leaders concerning the critical contribution intelligence can provide so they are knowledgeable and confident concerning the proper use of intelligence assets during domestic contingencies.

Similarly, NGB senior leaders should ensure a program is implemented to train non-intelligence personnel on the provisions of DODD 5200.27. Finally, it is important that the J2, J3, and Public Affairs establish policy on appropriate monitoring of social media during DOMOPS given the constraints upon use of U.S. Person information by both intelligence and non-intelligence elements.