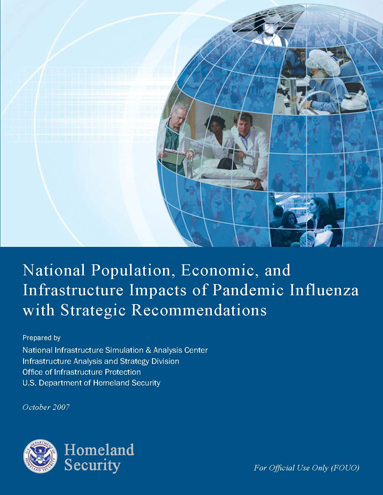 NISAC modeled the potential impacts of workforce absenteeism on U.S. infrastructure to determine if CI/KR operations are vulnerable to inconsistencies during a pandemic. The results of these analyses are summarized below.

NISAC used 2 modeling approaches to evaluate assumptions regarding the effect of workforce absenteeism on power plant operations in the electric power subsector. Both approaches led to the conclusion that it is unlikely an influenza pandemic would cause disruptions of the power grid, even at the peak of the most severe scenario examined. This analysis found that only under the most stringent assumptions of the tolerable levels of operator absenteeism—the absence of a single operator causes the plant to be idled—would the utility operators need to implement rolling brownouts to prevent blackouts and large-scale power disruptions.

Absenteeism is not likely to have a significant impact on the U.S. natural gas infrastructure, even under the most severe epidemic scenario examined. Barring a shortfall in natural gas production or a rise in demand above the capacity to deliver, fuel limitation will not be a problem for the electric power subsector.

Pandemic influenza could affect the water and wastewater CI/KR as a result of demand or supply shocks. Direct human consumption is a minimal portion of residential water use; thus, it is unlikely that individuals staying at home will change water demand sufficiently to affect any  system dynamics. The greatest risk to water and wastewater CI/KR from pandemic influenza is the reduction of available operators and support staff due to absenteeism. Establishing priority contracts with local engineering firms can mitigate this risk.

Potential impacts on telecommunications CI/KR include supply shocks caused by operation and maintenance crew shortages and demand shocks caused by shifts in population distribution when portions of the workforce remain at home. The primary risk is localized call drops (up to 14 percent of calls dialed) due to excessive loads resulting from the shifts in population behaviors
during a pandemic, such as working from home and increased dial-up Internet usage.

The models of the Public Health and Healthcare Sector CI/KR indicate that this sector would be highly impacted by a pandemic influenza. It would see a direct increase in demand for service as a result of increased morbidity and mortality related to the pandemic. Meanwhile, healthcare workforce reductions would be comparable to reductions in other sectors. However, an increase in the number of healthcare workers, volunteers, temporary workers, or medically trained staff from the armed services could offset those losses. The key findings for this sector are as follows:

• Surge capacity. Assuming that hospitals are operating at the average annual occupancy of licensed beds and there is no government-directed mitigation strategy, the U.S. healthcare system will be overwhelmed in 7 to 10 weeks and will turn away 3 to 4 million patients. If hospitals are already operating at 90 percent occupancy of licensed beds at the beginning of a pandemic, the system will be overwhelmed in 3 to 6 weeks.

• Surge duration. With no government-directed mitigation strategy in place, the U.S. healthcare system will be at full capacity for a total of 3 to 6 weeks. Effective government interventions can limit the hospital overflow to a few hospitals that operate at capacity for a few weeks.

• Dependence on emergency services. The U.S. healthcare system is highly dependent on the Emergency Services Sector. During a pandemic, with little or no government-directed mitigation, this tight interdependency could weaken the response to the epidemic.

• Healthcare costs. With no government-directed mitigation strategy, costs to existing U.S. healthcare facilities would be $17 to $19 billion in aggregate. Including new or temporary facilities, overall healthcare costs could be $80 billion.

Simulations of the 7 Phase 1 scenarios revealed the severity of an unchecked pandemic influenza; the relative value of interventions; and the consequences of behaviors of businesses, schools, and individuals. Figure 3-1 outlines the mortality rate and the clinical attack rate for each of the 7 scenarios; it also includes the rates for seasonal influenza outbreaks. The CMG, CMG-SE, and Anticipated scenarios produced illness and fatality outcomes similar to, or less severe than, those observed for seasonal influenza outbreaks.

All the scenarios used the same disease characteristics, which, in the Baseline (unmitigated) scenario, resulted in more than 25 percent of the population becoming symptomatic. The Fear-40 and the Antiviral scenarios showed only marginal reduction in the clinical attack rate relative to the Baseline scenario because social interactions and other conditions return to normal states after the antivirals are exhausted or fear-induced social distancing abates. The attack rate is the proportion of the population who become infected with a disease during a defined period of time. In the Fear-40 and Antiviral scenarios, greater than 20 percent of the U.S. population becomes symptomatic, leading to approximately 1.2 to 1.5 million deaths.

The CMG and Anticipated scenarios appear to be the most effective in terms of reducing human health impacts. The CMG scenario, however, assumes strong interventions and near-perfect implementation of and compliance with interventions such as student dismissals, liberal work leave, and social distancing.

While the CMG scenario assumed near-perfect implementation and compliance, the CMG-SE and Anticipated intervention strategies were developed to represent more practical situations including greater availability of treatment and lesser levels of compliance. 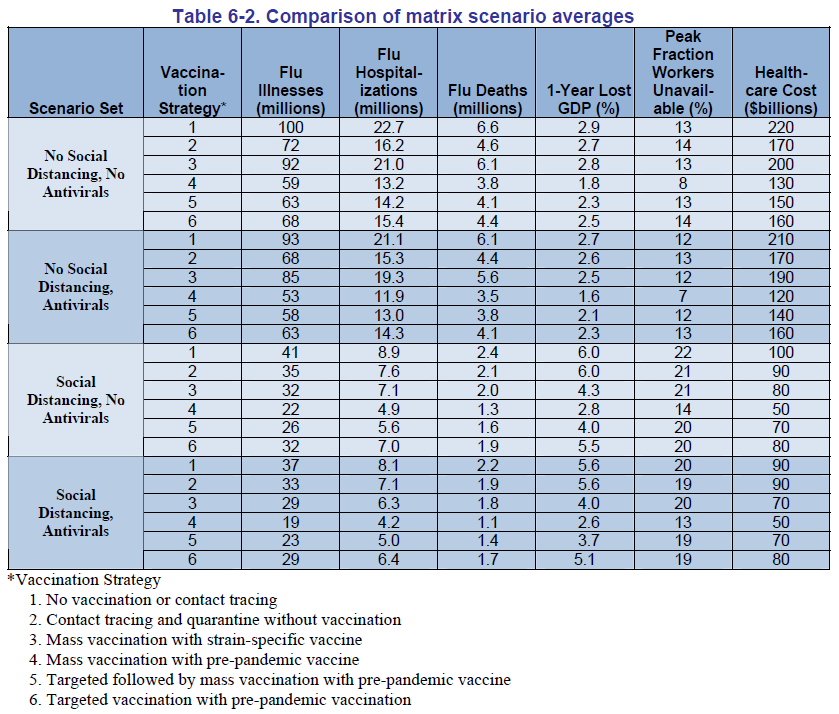