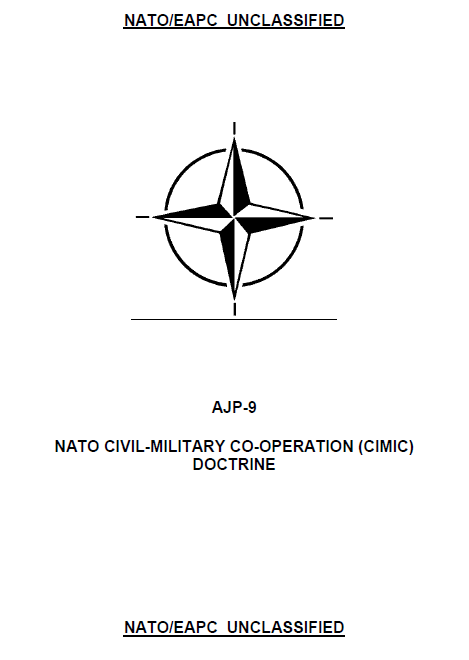 THE PLACE OF CIMIC WITHIN NATO OPERATIONS

1. The Strategic Concept. Civil-military co-operation is not a new phenomenon within NATO. Traditionally, however, it was seen as presenting little more than a logistic challenge. NATO’s operations beyond its own domestic borders, on territory devoid of fully functioning civil institutions or effective infrastructure present different and more complex challenges. Changes to the environment in which NATO might potentially operate have led to the development of a new Strategic Concept (SC 99)3. This recognises a much wider range of threats to international security than existed hitherto. In addition to continuing to provide for collective defence, the Concept states that the Alliance must stand ready “to contribute to effective conflict prevention and to engage actively in crisis management, including crisis response operations”. The Strategic Concept goes on to state:

The interaction between Alliance forces and the civil environment (both governmental and non-governmental) in which they operate is crucial to the success of operations.

2. Indeed operations have underlined the requirement to co-ordinate activities with national and local governments as well as both International Organisations (IOs) and Non Governmental Organisations (NGOs). CIMIC supports the Commander in achieving this. CIMIC is a command responsibility.

1. Definition. CIMIC is defined as:

“The co-ordination and co-operation, in support of the mission, between the NATO Commander and civil actors, including national population and local authorities, as well as international, national and non-governmental organisations and agencies.”4

a. CIMIC activities form an integral part of the Joint Force Commander’s (JFC) plan, are conducted in support of his mission and are related to implementing the overall strategy and achieving a stable and sustainable end-state.

b. The Commander’s CIMIC staffs are fully integrated into his Headquarters (HQ) and have full vision of and are authorised to co-ordinate CIMIC activities in the Joint Operations Area (JOA), theatre or region.

c. In co-operating with a potentially wide range of civilian bodies, NATO forces will, as far as possible and within military means and capabilities, accommodate and support the activities of these bodies, providing this does not compromise the mission.

d. CIMIC activities are carried out with a view to timely transition of those functions to the appropriate civilian organisations or authorities.

103 THE PURPOSE OF CIMIC

1. Background. CIMIC is applicable to both Article 5 Collective Defence and Non-Article 5 Crisis Response Operations (CROs). In both scenarios commanders are increasingly required to take account of social, political, cultural, religious, economic, environmental and humanitarian factors when planning and conducting military operations. Furthermore, commanders must take into account the presence of large numbers of IOs and NGOs with their own aims, methods and perspectives, all of which may have to be reconciled with those of NATO. The context and profile of CIMIC will alter according to the nature of the crisis or operation. In combat operations, the focus of CIMIC is likely to be narrower than in other operations. In a CRO, the focus of CIMIC will be broader and more complex, enabling a commander to play his part in what is likely to be a composite, multi-functional approach to a complex political emergency.

2. Relationships with the Civil Environment. Challenges will be enhanced by the presence of the media and the expectations of both the international and local communities. Therefore effective relationships with a wide range of civilian organisations as well as local populations, governments and military forces will be essential in future conflict resolution. These relationships may include joint5 planning mechanisms at the strategic level. CIMIC is the Commander’s tool in establishing and maintaining these relationships.

3. The Purpose of CIMIC. The immediate purpose of CIMIC is to establish and maintain the full co-operation of the NATO commander and the civilian authorities, organisations, agencies and population within a commander’s area of operations in order to allow him to fulfill his mission. This may include direct support to the implementation of a civil plan. The long-term purpose of CIMIC is to help create and sustain conditions that will support the achievement of Alliance objectives in operations. In meeting this purpose CIMIC staff will:

a. Liaise with civil actors at the appropriate level.

b. Engage in Joint planning, at the strategic as well as the operational level, with appropriate civilian bodies before and during an operation.

c. Carry out continuous assessments of the local civil environment, including local needs in order to identify the extent of any vacuum and how that vacuum might be filled.

d. Oversee the conduct of civil-related activities by military forces, including the provision of requisite functional specialists.

e. Work towards a timely and smooth transition of civil responsibilities to the proper authorities.

f. Work with other staff branches on all aspects of operations.

g. Advise the Commander on all of the above.

4. Beyond this other objectives of CIMIC will be situation dependent. Potential CIMIC tasks in both Article 5 Collective Defence and non-Article 5 CROs are addressed in Chapter 3. 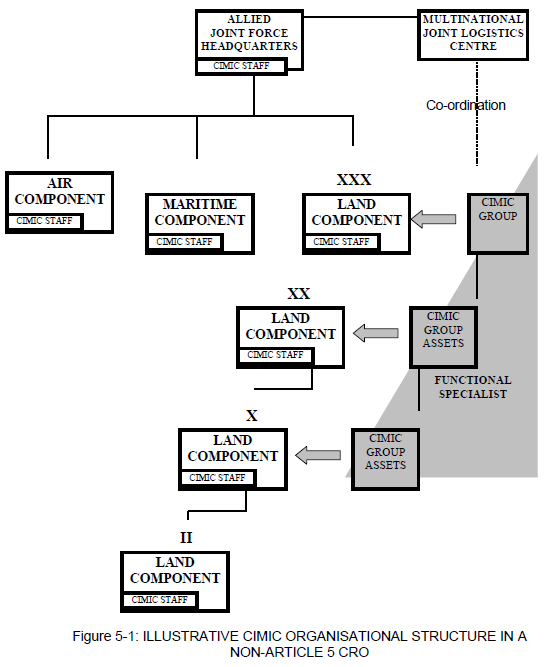