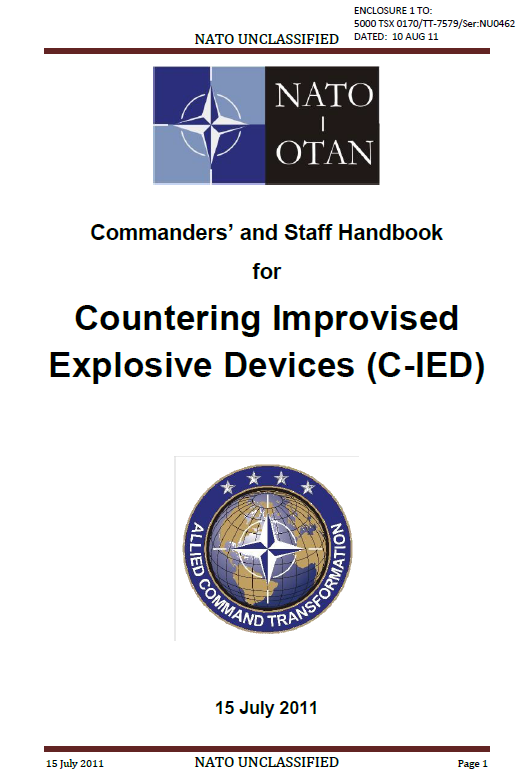 1. There is likely to be an IED threat in all military deployments and this should be a key consideration when undertaking the preparation, planning and execution of current and future NATO deployed operations. Generic detail of the threat environments and the C-IED approach are described in Reference A but for each deployment further specific operational analysis must be undertaken to ensure a mission focussed approach. Key to this is the generation of C-IED awareness and capability within the staff at every level of command.

2. This handbook sits under References A and B and is intended to be complimentary to existing NATO doctrinal publications and formation HQ operational planning and capability development. It should be noted that although the handbook is aligned with the AJP 3.15A, it seeks only to provide an operational and tactical level staff perspective. It is designed for use within military HQs at all levels and is equally applicable for National C-IED capability development. It will be a living document and updated and amended in conjunction with NATO publications and the lessons identified/ lessons learned process.

3. This handbook does not seek to define staff HQ or national operational planning processes for C-IED but should be used as a reference manual during the planning and execution of operations. Every operational deployment will have different requirements, depending upon environmental and operational variables; therefore the Commander must identify appropriate C-IED activities and processes within his staff functions as a priority.

4. C-IED is a relatively new phenomenon and has yet to be fully institutionalised into existing military staff training and functions. All staff must be aware of this fact and take every opportunity to develop wider awareness and understanding to better integrate C-IED aspects into all training and processes.

AIM OF THE HANDBOOK

5. The aim of the handbook is to outline outputs, staff responsibilities and enablers for Commanders and staff to consider when integrating C-IED into the preparation, planning and execution of operations, and to foster an Attack the Network mindset.

6. It is widely acknowledged that IEDs will be a major threat for all levels of current and future operations and it is therefore imperative that national and NATO Formation and Unit HQs are able to prepare for, plan and conduct C-IED activities. Clearly defined C-IED outputs will enable the force to undertake these activities throughout the JOA in order to achieve the mission.

7. Definition. Reference A defines C-IED as follows:
The collective efforts at all levels to defeat the IED system by attacking the networks, defeating the device and preparing the force.

8. C-IED approaches the IED as a systemic problem and C-IED actions aim to defeat the IED System. However, IEDs are only one of a number of forms of asymmetric attack used by insurgents, criminals, terrorists and other malign actors. The networks (e.g. Narcotics, Financial, Cyber, Piracy, Human Trafficking, IED, Terrorism, etc.) overlap and, therefore, will concurrently service the plethora of other requirements and activities of the adversary. Attack the Networks activities should take place at all levels: strategic, operational and tactical and, as the networks are predominantly personality-based, activities will focus against adversarial personalities and processes/activities as well as against IEDs/facilities/materials and their production, and will require a broad approach to the problem.

9. As there is an overlap of activities within the networks, they concurrently support the different aspects of the insurgents’ or adversaries aims and objectives. Understanding of, and intelligence on, these networks will be vital to not only the overall attack the network process but also the ability to identify the nodes and linkages within the financial, commercial, and communication sectors as well as an adversary’s own structures and interactions within the population. Most importantly, understanding these networks will highlight the adversary’s critical vulnerabilities; the target for all operational planning and activity. Thus planning for C-IED actions must include consideration of, and actions against, the adversarial networks in the widest context and recognition and understanding of friendly force Attack the Network operations taking place to achieve unity of effort and meet the Commander’s intent.

10. As the breadth of Attack the Network activities can transcend boundaries at all levels, from national through political to military, it is vital to engage with those functions, activities and personalities that are involved in the fight. This will entail military planners and commanders stepping outside their ‘comfort zone’ and engaging with entities from organizations that they may have had little or no contact with. This requires flexibility and adoption of new mind sets and appreciation of differing priorities and perspectives and, as personally uncomfortable and challenging as this may be, it is vital to success in attacking the networks and the C-IED system they support.

11. C-IED operations should not be planned or executed in isolation and must be fully integrated into the national or NATO force strategic objectives. A C-IED capability is generated when a series of tasks, activities and techniques are undertaken and integrated within the wider context of operational and tactical activities. C-IED may be undertaken within the full spectrum of operations although it is likely to be a greater factor within hybrid threat environments such as an insurgency, terrorism campaigns and during Stabilisation, Security, Transition and Reconstruction Operations (SSTRO). C-IED should be viewed as an activity to achieve the overarching mission rather than a distinct and separate function.

12. C-IED activities can take place at the local, national, regional, and international level. Subsequently, designing an operation to defeat the IED threat requires a comprehensive strategy that integrates and synchronizes series of actions and tasks from the tactical to the strategic levels of command and requires interaction with non-military organizations and the populace. As with the wider hybrid operations C-IED actions may be categorized as direct (focused on the enemy) or indirect (focused on the population). Whether direct or indirect, C-IED operations can be proactive or reactive and applicable to one or more of the three C-IED pillars. The guidance within the handbook is designed to be scalable, flexible and applicable to a variety of structures and requirements.