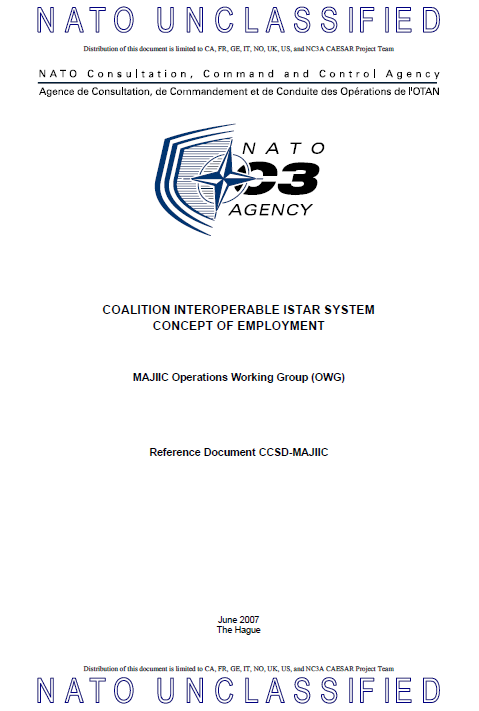 The MAJIIC project is dedicated to developing coalition capabilities for the
interoperability and integration of intelligence, surveillance, target acquisition and reconnaissance (ISTAR) systems within a network enabled environment. The ISTAR products considered under the auspices of the MAJIIC project include Ground Moving Target Indicator (GMTI) data, Synthetic Aperture Radar (SAR) and Electro-Optical/Thermal Imaging (EO/TI) imagery/motion imagery, weapon locating information, Electronic Warfare Support Measures (ESM) and various exploited products derived from the aforementioned ISTAR data. Of note: this data, imagery and information may include products from other traditional and non-traditional ISTAR systems, that are present both within and outside of the ISTAR network. This data, imagery and information may be provided as streaming video, still imagery, tactical data link, metadata and in textual format. Further, ISTAR data and information will be available to supported and supporting commanders in near real time (NRT) and/or archived for up to 96 hours. A concept of employment for the collaborative employment of multinational ISTAR systems is published separately under the MAJIIC project.

The ISTAR capabilities considered in this tactics, techniques and procedures (TTP)
document include the ground, maritime and aerospace platforms that collect the aforementioned data
and information products, and the related capabilities required for the processing and dissemination of
the resulting ISTAR products. These related capabilities include those directly and indirectly
associated with the management and exploitation of ISTAR system products as well as systems that
benefit from the collection, exploitation and dissemination of ISTAR products within a network
enabled environment.

The ISTAR systems described in this CONEMP are envisaged as offering support to
multinational coalition operations such as those undertaken by the North Atlantic Treaty Organization
(NATO) in situations ranging from Article V Operations to peace support operations.

Commanders are faced with a variety of missions and operations ranging from low to
high intensity situations at the tactical and operational levels. To operate effectively, commanders at
all levels must see first and understand the battlespace in order to act quickly and decisively. The
requirement for timeliness of information to plan and conduct these operations can vary from nearreal-
time (NRT) to several hours or days depending upon the level of command, type of unit, and the
nature of the situation and operation. However, the acceptable time lag between collection of
information and its exploitation has continued to shorten as operational tempo increases.

Coalition operations in the former Republic of Yugoslavia, particularly Kosovo,
highlighted operational and technical interoperability difficulties in achieving timely dissemination
and effective exploitation of ISTAR data. Based on the findings from these operations, seven nations,
Canada, France, Germany, Italy, Netherlands, Norway, Spain, the United Kingdom and the United
States of America together with the NATO Consultation, Command and Control Agency (NC3A) as
technical manager, agreed to work together under Project Multisensor Aerospace ground Joint
Interoperable ISR Coalition (MAJIIC) to maximize the military utility of each national ISTAR assets.

ISTAR assets provide surveillance and imagery of the battlespace employing multiple
methods. These include radar surveillance and imagery (GMTI data and SAR imagery), electrooptical
and thermal imagery (EO/TI) motion imagery, weapon locating infromation and electronic
support measures (ESM). ISTAR systems may provide wide area surveillance via Radar and ESM
systems or point surveillance via EO/TI and SAR) systems. ISTAR collection requirements include
but are not limited to adversary, friendly and nuetral force disposition and movement, fixed objects
and the electronic spectrum associated with land, maritime and aerospace forces. Of note: for the
purpose of these concepts of employment (CONEMP), the term “ground” refers to the earth’s surface,
including land, inland and littoral waterways, and the airspace immediately above the ground
(generally below 1000 feet above ground level (AGL)).

ISTAR system data, imagery and information are often a critical component in the
successful detection, identification and engagement of adversary forces throughout the AOR, and as a
consequence they are generally classified as high demand/low density (HD/LD) assets. This is
especially true in support of time sensitive operations against emerging targets. As HD/LD assets,
ISTAR system requirements generally exceed the number of systems available to any given
commander. In order to achieve optimum results from these HD/LD systems, it is essential that the
data, imagery and information gathered and exploited by them is effectively and efficiently
disseminated and exploited by all coalition supported and supporting commanders.

Infrared thermography is the technique that uses an infrared imaging and measurement
camera to see and measure invisible infrared energy being emitted from an object. Thermal, or
infrared energy, is energy is not visible to the naked eye because its wavelength is too long. It is the
part of the electromagnetic spectrum that we perceive as heat. Unlike visible light, in the infrared
spectrum, everything with a temperature above absolute zero emits infrared electromagnetic energy.

Even cold objects, such as ice cubes, emit infrared radiation, but depends on the environmental
conditions. The higher the temperature of the object, the greater the infrared radiation emitted. The
infrared sensor can detect infrared energy and converts this invisible infrared energy into a twodimensional
visual image. What the image shows are the hot and cold areas that are contrasted in
different colours or shades of grey. In order to identify objects of interest, the objects must possess a
temperature differential to its environment, otherwise the collected image does not provide the thermal
imagery analyst enough image contrast to detect, identify and recognise the objects under observation.

There are significant differences between electronic intelligence (ELINT) and electronic
support measures capable systems. While both systems receive, process and report data based on
various electronic emissions, only ELINT systems are specifically designed to detect, classify, and
identify threat systems within the electronic order of battle (EOB). ESM systems are most often used
for threat warning and are not designed to provide the data and information required for ELINT
operations. Operators using ESM data and information must be aware of the limitations of this data
and information when employing it for operations that require a high degree of accuracy such as
targeting. ESM systems may however, support IPB and I&W for commanders providing opportunities
for cueing of other more accurate ISTAR systems. 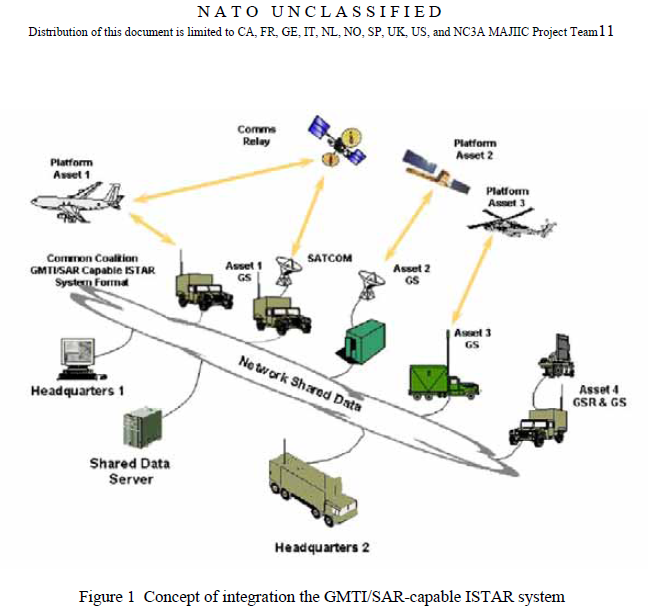 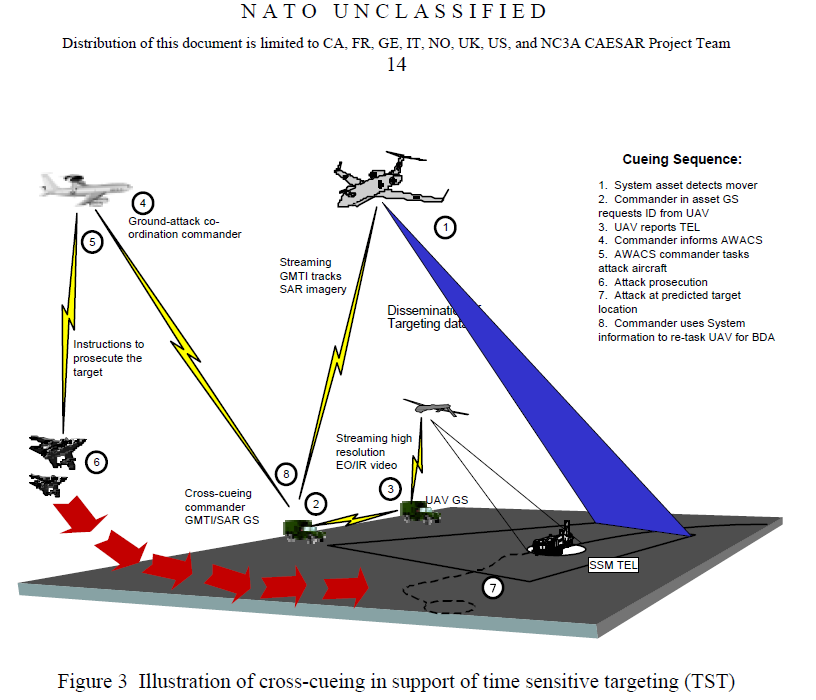