The following is NATO’s strategic communications framework for operations in Kosovo in both 2011 and 2010. Though unclassified, NATO doctrine and policy documents are not released to the public. 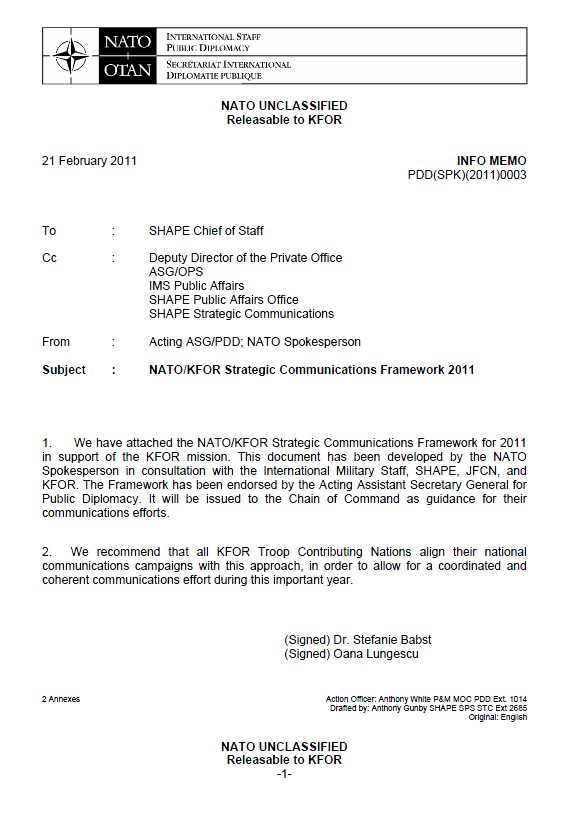 1. The mission of KFOR as authorised by the North Atlantic Council (NAC) is to contribute to a safe and secure environment in Kosovo and to support the development of security institutions capable of operating without NATO assistance.

2. In recognition of the improved security situation in Kosovo, KFOR in 2010 began to gradually reduce its force levels and posture by moving to a “Deterrent Presence” (DP) posture. The first phase of KFOR’s move to Deterrent Presence, so-called “Gate One”, was achieved on 31 January 2010. The transition to Gate 2 was approved by the NAC on 26 October 2010 with achievement by March 2011. With the move through Deterrent Presence, NATO will gradually adjust the number of troops deployed in Kosovo. By the time Gate 2 is achieved, KFOR troop levels will be around 5,000 in total.

3. In 2010, the NAC approved the transfer of lead guarding responsibility for a number of Properties with Designated Special Status (PrDSS) from KFOR to the Kosovo Police. Subsequently, the responsibility for four out of the nine PrDSS was transferred to the Kosovo Police. This “unfixing” process is expected to continue, as conditions permit and subject to NAC approval, during 2011.

4. KFOR is assisting in the stand-up and training of the Kosovo Security Force (KSF), an all-volunteer, multi-ethnic, lightly-armed security force under democratic, civilian control. The KSF’s mission is to conduct civil protection operations and to assist civil authorities in responding to natural disasters and other emergencies. KFOR’s training role is limited to assistance and advice in these areas. Initial KSF operating capability was declared on 15 September 2009. As recruitment and training of KSF members proceeds, expectations of a declaration of KSF Full Operational Capability will continue to grow.

5. The adaptation of KFOR’s force posture during 2010 and its unfixing from Properties with Designated Special Status have been supported by an effective strategic communications (StratCom) approach which has been closely coordinated at all stages throughout the NATO chain of command and NATO HQ. Continued StratCom efforts will be required to complement and support military and civilian activities during 2011 as KFOR’s footprint and posture continues to adapt and as progress is made toward mission achievement.

6. The aim of this framework is to establish NATO’s StratCom objectives, themes and messages in Kosovo for 2011, which will guide all NATO/KFOR activities in the communications and information environment.

7. The guiding core message is that:

“NATO is committed to contributing to a safe and secure environment within Kosovo, according to its mandate.”

8. NATO’s StratCom objectives in Kosovo are to:

a. secure and maintain the understanding and support of the Kosovo population, regional actors, Troop Contributing Nations’ populations and the International Community for NATO’s mission in Kosovo;

b. dissuade and deter those that might wish to conduct or support destabilizing activities, and isolate them from public support;

c. engage and enlist support from those who, by their actions or implicit authority, can prevent destabilizing activities;

d. engage and encourage support from non-NATO organisations and entities for the continued development of Kosovo as a stable entity within the Balkans region;

e. demonstrate sustainable progress in the overall security situation and in the capability of local security institutions to effectively play their respective roles in the security sector;

9. The following themes are to be promoted to help our StratCom objectives. These themes will, in turn, be reinforced by communications focus topics. Local circumstances will determine the precise manner in which the themes are promoted, but the aim is to leave audiences with the understanding that our mission reflects the following:

Commitment – The Alliance’s continued commitment to stability, security and multi-ethnicity in Kosovo through political dialogue and democratic processes which, in turn, will contribute to security of the wider Western Balkans region;

Confidence and Trust – NATO’s support to building confidence and trust within all communities in the impartiality and capability of local security institutions in Kosovo, allowing NATO-led forces to hand over lead responsibility for specific tasks to those institutions where conditions permit;

Cooperation – NATO’s determination to work in close cooperation with International Community partners and civil authorities, including other international actors and the institutions in Kosovo, with KFOR as the third responder, and in accordance with its UN mandate, to ensure a safe and secure environment in Kosovo;

Capacity-Building – NATO/KFOR’s support for the development of civil protection capacity by the Kosovo Security Force as a multi-ethnic, lightly-armed, all-volunteer security force under democratic civilian control. In addition, NATO/KFOR support to the Kosovo Police to facilitate handover of border and boundary responsibilities and guarding duties at PrDSS;

Create Conditions – NATO’s role is to contribute to a safe and secure environment Kosovo-wide, thus creating conditions for dialogue amongst all stakeholders to support broader democratic, economic and social progress.