A document from the Naval Security Group discussing Sugar Grove's affiliation with the ECHELON global communications interception system. From the National Security Archive.

Sugar Grove is an American government communications site located in Pendleton County, West Virginia operated by the National Security Agency. According to a December 25, 2005 article in the New York Times, the site intercepts all international communications entering the Eastern United States.1

The site was first developed by the Naval Research Laboratory in the early 1960s as the site of a 600 ft (180 m) radio telescope that would gather intelligence on Soviet radar and radio signals reflected from the moon and would gather radioastronomical data on outer space, but the project was halted in 1962 before the telescope construction was completed. The site was then developed as a radio receiving station. The site was activated as “Naval Radio Station Sugar Grove” on May 10, 1969, and two Wullenweber Circulary Disposed Antenna Arrays (CDAAs) were completed on November 8, 1969. Numerous other antennas, dishes, domes, and other facilities were constructed in the following years. Some of the more significant radio telescopes on site are a 60 ft (18 m) dish (oldest telescope on site), a 105 ft (32 m) dish featuring a special waveguide receiver and a 150 ft (46 m) dish (largest telescope on site).2

Though the CDAAs were decommissioned in the 1990s, the site is still active, and photographs taken between 2000 and 2004 show significant construction on the site.

Sugar Grove is located in an officially designated National Radio Quiet Zone that covers 13,000 square miles (34,000 km2) in West Virginia and Virginia. The zone was established by Congress in 1958 to facilitate its mission and that of the National Radio Astronomy Observatory located 30 miles (48 km) away at Green Bank in Pocahontas County, West Virginia.

The small community of Sugar Grove is located several miles south of the installation.3

The Naval Research Laboratory in Washington, D.C. announced in June 1959 that it expected to complete by 1962 a radio telescope “so powerful it may be able to spot the edges of the universe.” A 600-foot dish-shaped antenna was being built in a mountain valley near Sugar Grove, West Virginia, then a hamlet of 21 persons. However, in December 1959 it was further announced that “The special listening post in West Virginia probably will go into operation early in 1960. At first an 85-foot dish will be used. The Navy’s West Virginia radio telescope is costing $79,000,000. The reflector disc and antenna weigh 20,000 tons. They are mounted on a wheel that will rotate almost 180 degrees so that the reflector can be turned in any direction between the horizons.” This was the beginning of the Navy’s presence at Sugar Grove which continues on today.

On May 10, 1969 Naval Radio Station (R) Sugar Grove was activated. The facility was originally developed in the early 1960s for a radio telescope that would probe outer space. This project was halted in 1962 because advances and refinements in related fields of science and technology made it outdated before it was even completed. In March 1965 work was begun to convert the site to a radio receiving station. The station is located in an officially designated National Radio Quiet Zone, an area of 13,000 square miles, which is relatively free from outside electromagnetic interference. Two Wullenweber Circulary Disposed Antenna Arrays (CDAAs), side-by-side, were completed on Nov. 8, 1969. The two CDAAs provided increased capacity for simultaneous reception of ship-shore and overseas circuits. Two domed antennas, with diameters of 40 feet and 60 feet, were also built on the station. A two-story 60,000 square foot operations building, completely underground, was fitted with some 70 radio receivers and numerous other communications devices. One hundred enlisted men and 30 officers were assigned to the new station. On 30 December 1969 NAVCOMMSTA Cheltenham, Maryland began taking the Rio Trunk, via Sugar Grove keying lines, making the first operational use of NAVRADSTA (R) Sugar Grove.

NAVRADSTA (R) Sugar Grove (NSS) became the primary east coast HF receiving site for ship-shore and overseas traffic when it replaced the old receiver site at Cheltenham, Maryland. It closed in the 1990s when the Navy no longer used HF radio as the primary method of delivering traffic, and the CDAAs were then removed.

It is interesting to note that less than 60 miles from Sugar Grove COMSAT operates a station at Etam, West Virginia where more than half of the commercial international satellite communications entering and leaving the U.S. pass through each day. The National Radio Astronomy Observatory operates the Robert C. Byrd Telescope at Green Bank, West Virginia, the world’s largest fully steerable single aperture antenna, 100 x 110 meters in size. It is approximately 30 miles west-southwest of Sugar Grove.

The National Radio Quiet Zone was established by the Federal Communications Commission on November 19, 1958 and by the Interdepartmental Radio Advisory Committee on March 26, 1958 to minimize possible harmful interference to the National Radio Astronomy Observatory in Green Bank, WV and the radio receiving facilities for the United States Navy in Sugar Grove, WV. The Zone is bounded by meridians of longitude at 78-29-59.0W and 80-29-59.2W and latitudes of 37-30-0.4N and 39-15-0.4N, and encloses a land area of approximately 13,000 square miles which comprises large areas of both Virginia and West Virginia.

The operational purpose of Navy Information Operations Command, Sugar Grove is to perform communications research and development for the U.S. Navy, the Department of Defense and various elements of the U.S. government.

The Navy’s presence in Sugar Grove began in 1955 when the present site of the NIOC was selected for a Naval Research Laboratory (NRL) project which was to lead to the construction of a large parabolic antenna for advanced communications research. The site was selected as the ideal location for this project because of the natural mountain shielding and the extremely low level of man-made noise.

In 1956, a 60-foot antenna was completed and became operational for feasibility studies for a 600-foot parabolic antenna. Originally, the site was developed as a radio telescope that would probe outer space, tuning in on radio signals 38 billion light-years away from Earth. The 600-foot dish would have been the heart of the operation. In 1958, ground was broken and construction began on base.

However, unforeseen advances in related fields of science and technology made the project obsolete before it was completed and it was subsequently halted in 1962. The Navy abandoned the original intent of the project, but the 60-foot dish is still operational today. It is referred to as the 1-10, as the dish was to be one- tenth the size of the planned but never completed 600-foot antenna.

In 1962, in response to a request from Senator Robert C. Byrd (D-WV) to find other uses for the Sugar Grove facility, the Navy proposed the site to be used as a radio receiving station, due in part to its unique location within the National Radio Quiet Zone. The zone, an area 100 miles square relatively free from outside electromagnetic interference, was established in 1959 for the nearby Green Bank Radio Observatory. Byrd noted that the natural isolation provided by the George Washington National Forest and surrounding mountains made for near-perfect conditions for high-frequency capability. The proposal for the station was approved and in 1963, the Naval Radio Station (Receiver, NRS) was established.

The original cost of the station at this site was $11 million. According to the March 4, 1968 edition of the Congressional Record, its mission would be the main receiver site for worldwide Navy Radio communications coming into the Washington, D.C. area. Also in 1968, work was finished on the 150-foot parabolic antenna, which is today the largest dish at the operations site. Further, the Naval Security Group (NSG) established a detachment at the site in the same year.

NRS Sugar Grove was formally commissioned on May 10, 1969. LCDR F.M. Tettlebach was the first Officer-in- Charge of the new station. Navy personnel resided in Cheltenham, Maryland, until the support site was completed. The Naval Radio Station was called “The Navy’s Ear,” gathering communications from Navy planes, ships and stations from around the world. Two huge, circular antenna arrays, or Wullenwebers, each 1,000 feet in diameter, once served as the station’s main receiving antennas.

In 1973, operational an administrative control of NRS was transferred to Naval Communication Station, Norfolk. NRS became a component of Naval Communications Area Master Station Atlantic, Norfolk and the Officer-in-Charge billet was upgraded to Commanding Officer. The installation was awarded the Meritorious Unit Commendation in April 1974, for outstanding support of the national intelligence effort. Two years later, the 60-foot antenna operations were moved to a new Naval Security Group operations building. Facilities work to the previously unused lower level of the Underground Building (UGB) a year later offered space to house the Naval Security Group Detachment’s communications, administration, maintenance and logistics and operations groups.

The TIMBERLINE II project in 1984 provided additional opportunities to remote systems to the 30-year-old UGB and provided needed upgrades to emergency power and air-conditioning systems. The former NSG operations building, the Linn Operations Center (LOC), is now home to the Supply and Training offices. The building was dedicated to the memory of Chief Communications Technician Raymond E. Linn, who gave his life in defense of his country aboard the USS LIBERTY (AGTR 5) in the Mediterranean Sea off the coast of Israel June 8, 1967.

Due to increased automation in Naval communications, in 1992 the mission of NRS was merged with another location. On October 1, 1992, the Naval Radio Station was officially closed and the Naval Security Group Activity was established. On December 29, 2005, Navy Security Group Activity Command was also disestablished for the same reason. Navy Information Operations Command, Sugar Grove was established as part of the integration of NAVSECGRU functions into Naval Network Warfare Command. The SECGRU Service Cryptologic element responsibilities have been performed by the Information Operations Directorate of NETWARCOM ever since. 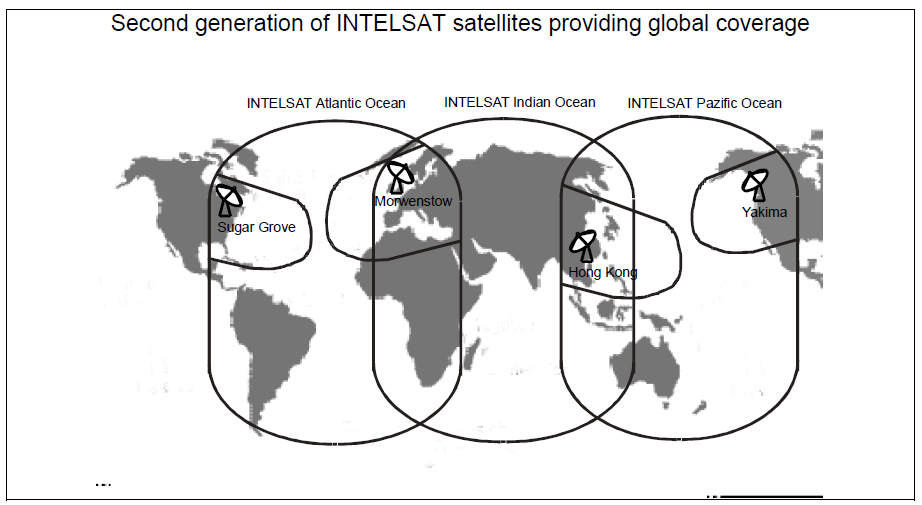 A map of the coverage area of several ECHELON intercept stations from the EU's 2001 report. 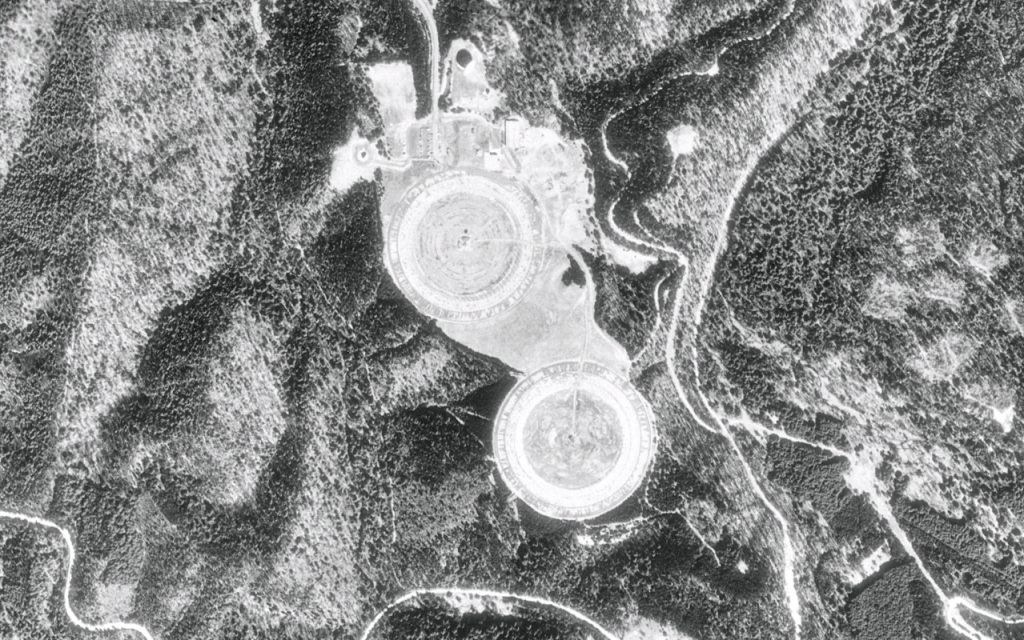 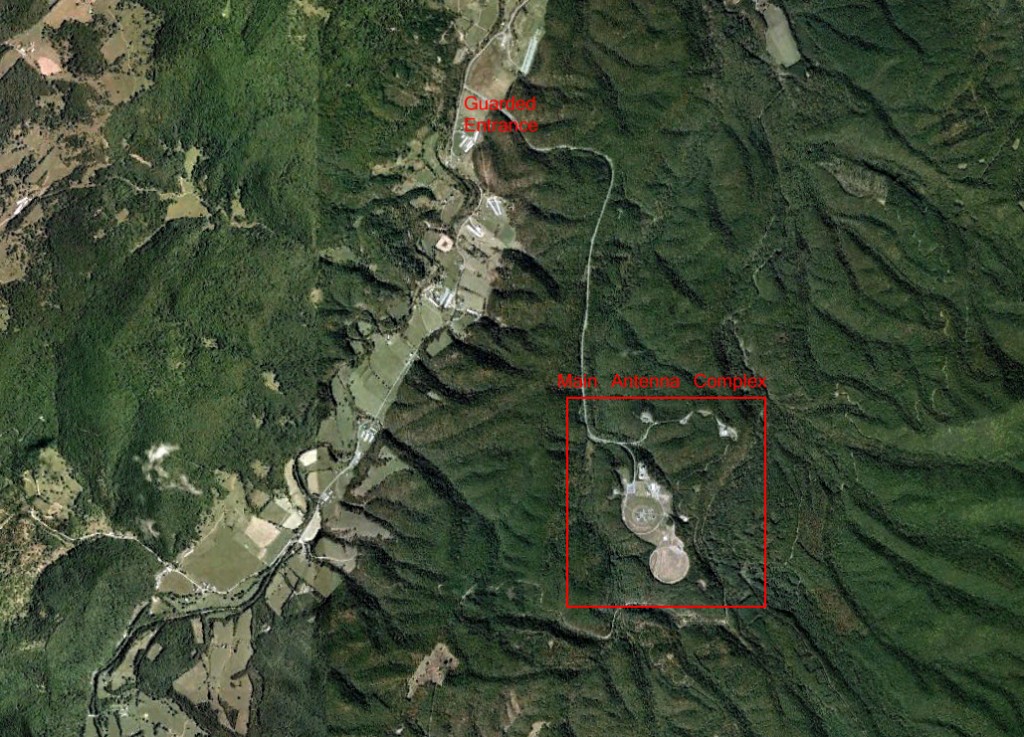 Overview of Sugar Grove Facility. The base is just north of the guarded entrance to the antenna complex. 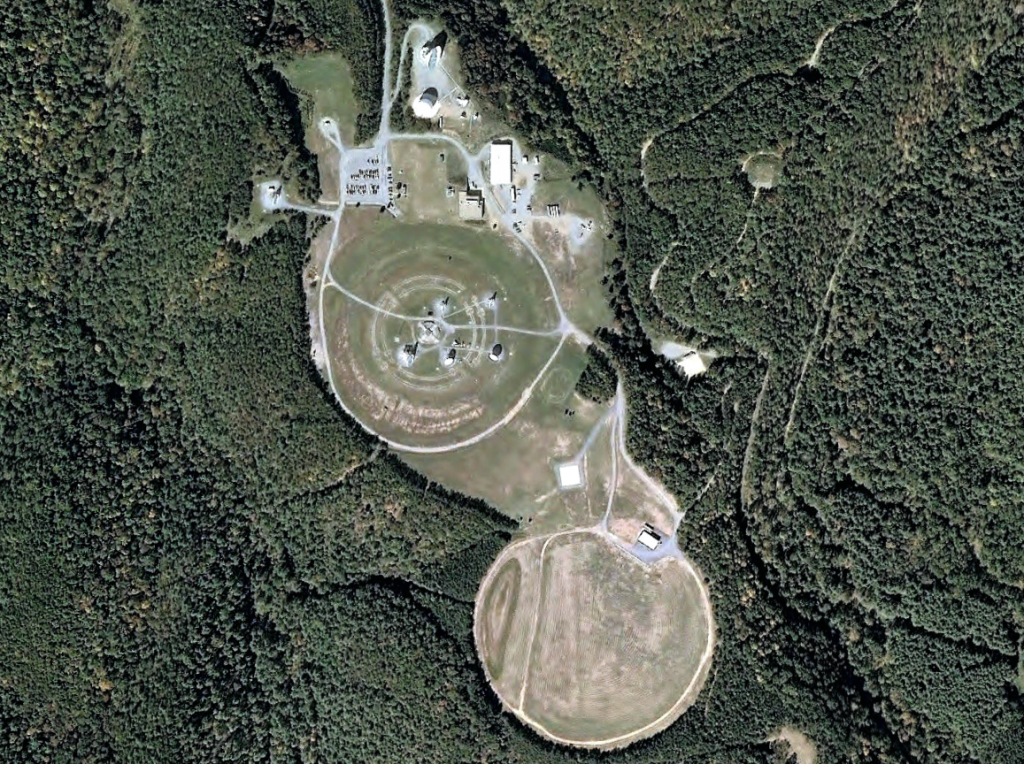 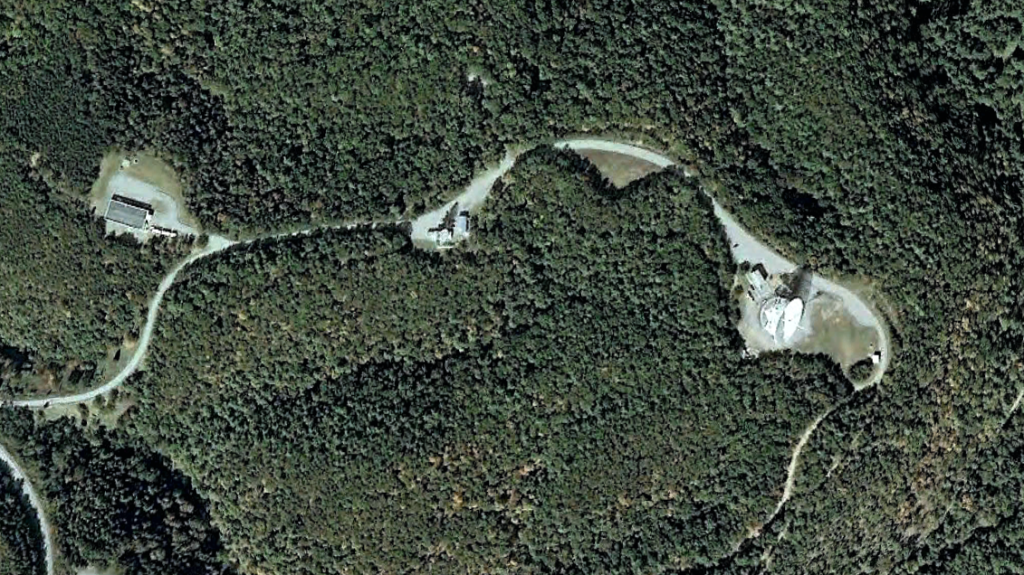 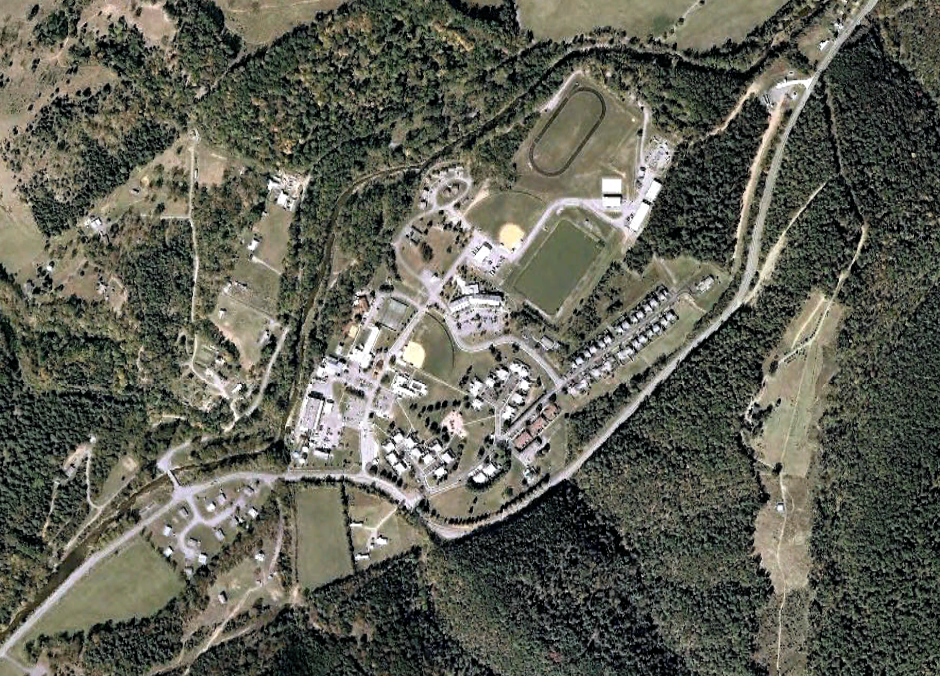 Base just north of the Sugar Grove antenna complex. 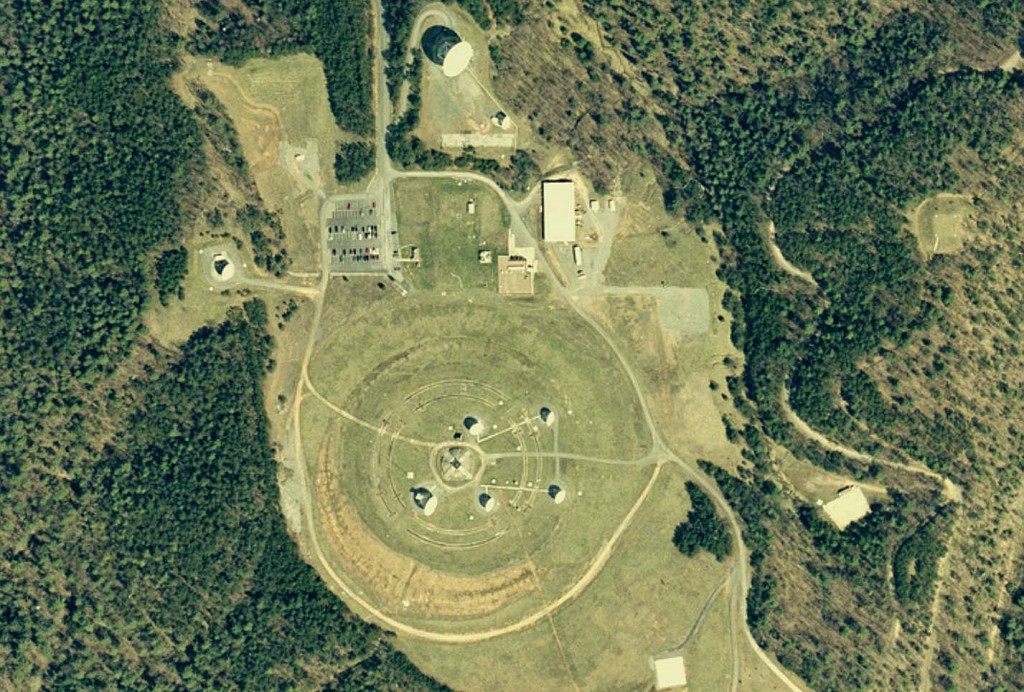 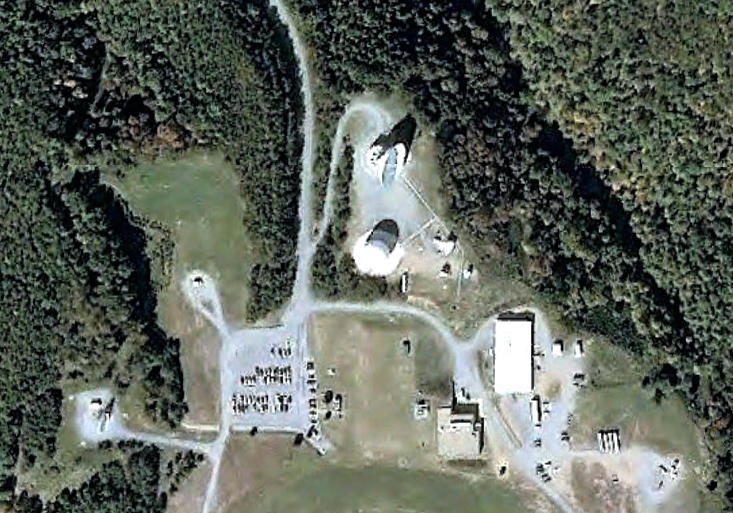