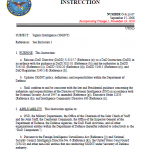 TC 2-50.5 replaces FM 34-8-2, dated 1 May 1998. This publication does not replace the fundamental principles and tactics, techniques, and procedures contained in the other FM 2-series manuals; however, it does focus on their application. It is to be used in conjunction with the other FM 2-series manuals and conforms to the overarching doctrinal concepts presented in FM 3-0 and FM 2-0. The target audience for this manual is the intelligence officers serving as the G-2/S-2 and their staffs— intelligence warrant officers, noncommissioned officers, and junior enlisted Soldiers. TC 2-50.5 applies to the Active Army, the Army National Guard/Army National Guard of the United States, and the U.S. Army Reserve, unless otherwise stated.

Sugar Grove is an American government communications site located in Pendleton County, West Virginia operated by the National Security Agency. According to a December 25, 2005 article in the New York Times, the site intercepts all international communications entering the Eastern United States. The site was first developed by the Naval Research Laboratory in the early 1960s as the site of a 600 ft (180 m) radio telescope that would gather intelligence on Soviet radar and radio signals reflected from the moon and would gather radioastronomical data on outer space, but the project was halted in 1962 before the telescope construction was completed.[1] The site was then developed as a radio receiving station. The site was activated as “Naval Radio Station Sugar Grove” on May 10, 1969, and two Wullenweber Circulary Disposed Antenna Arrays (CDAAs) were completed on November 8, 1969. Numerous other antennas, dishes, domes, and other facilities were constructed in the following years. Some of the more significant radio telescopes on site are a 60 ft (18 m) dish (oldest telescope on site), a 105 ft (32 m) dish featuring a special waveguide receiver and a 150 ft (46 m) dish (largest telescope on site).

The Headquarters of the National Security Agency is located on Route 32 just south of the Baltimore/Washington Parkway, on Fort Meade. No formal means of visiting the NSA headquarters exists, but a look at the historic side of code breaking is provided at the neighboring National Cryptologic Museum located north of the headquarters on Route 32.