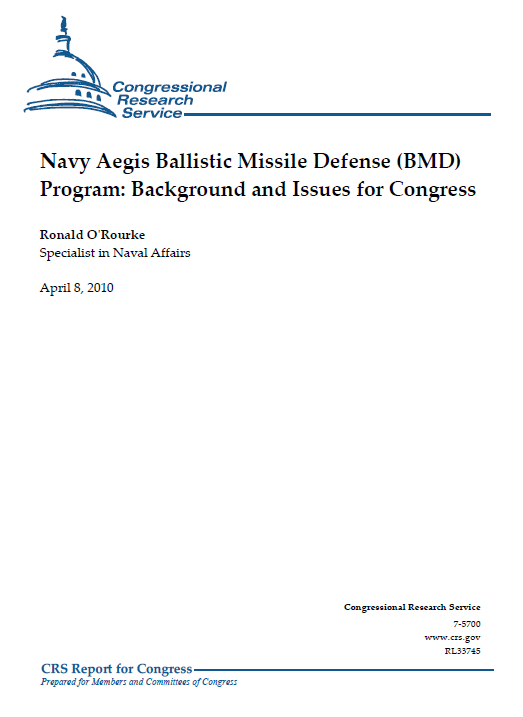 The Aegis ballistic missile defense (BMD) program, which is carried out by the Missile Defense Agency (MDA) and the Navy, gives Navy Aegis cruisers and destroyers a capability for conducting BMD operations. Under current MDA and Navy plans, the number of BMD-capable Navy Aegis ships is scheduled to grow from 20 at the end of FY2010 to 38 at the end of FY2015. MDA and Navy plans also call for an increasing portion of the Navy’s BMD-capable Aegis ships to be equipped with newer and more capable versions of the Aegis BMD system.

Some observers are concerned—particularly following the Administration’s announcement of its
intention to use Aegis-BMD ships to defend Europe against potential ballistic missile attacks—
that demands from U.S. regional military commanders for BMD-capable Aegis ships are growing
faster than the number of BMD-capable Aegis ships. They are also concerned that demands from
U.S. regional military commanders for Aegis ships for conducting BMD operations could strain
the Navy’s ability to provide regional military commanders with Aegis ships for performing non-
BMD missions. There is also some concern regarding the adequacy of planned numbers of SM-3
missiles—the interceptor missiles used by Aegis ships for conducting BMD operations.
The Aegis BMD program is funded mostly through MDA’s budget. The Navy’s budget provides
additional funding for the program. MDA’s proposed FY2011 budget requests a total of $2,161.6
million for the Aegis BMD program.

FY2011 issues for Congress include whether to approve, reject, or modify the FY2011 MDA and
Navy funding requests for the Aegis BMD program, and whether to provide MDA or the Navy
with additional direction concerning the program. FY2011 options for Congress regarding the
Aegis BMD program include, among other things, the following: accelerating the modification of
Aegis ships to BMD-capable configurations, increasing procurement of new Aegis destroyers,
increasing procurement of SM-3 missiles, and providing funding for integrating the SM-2 Block
IV BMD interceptor missile into the 4.0.1 version of the Aegis BMD system. 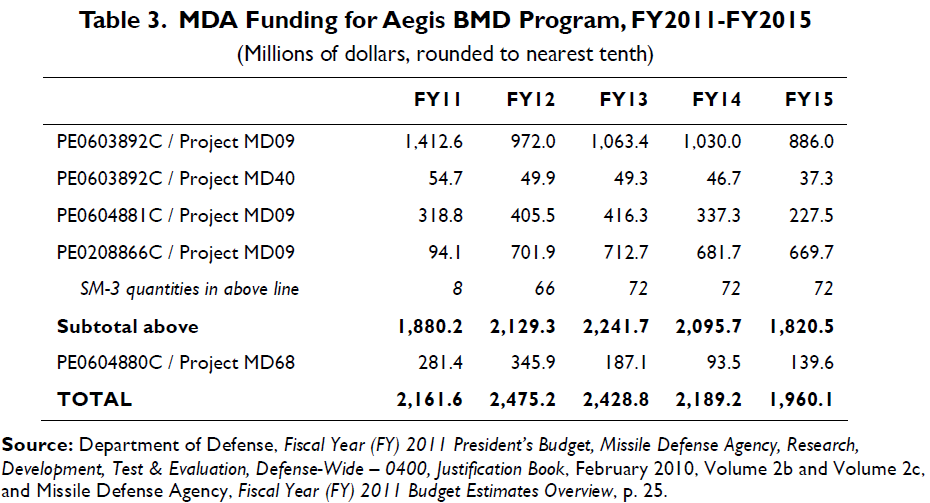