The following bulletin was first published by journalist Kenneth Lipp in a post on Medium. 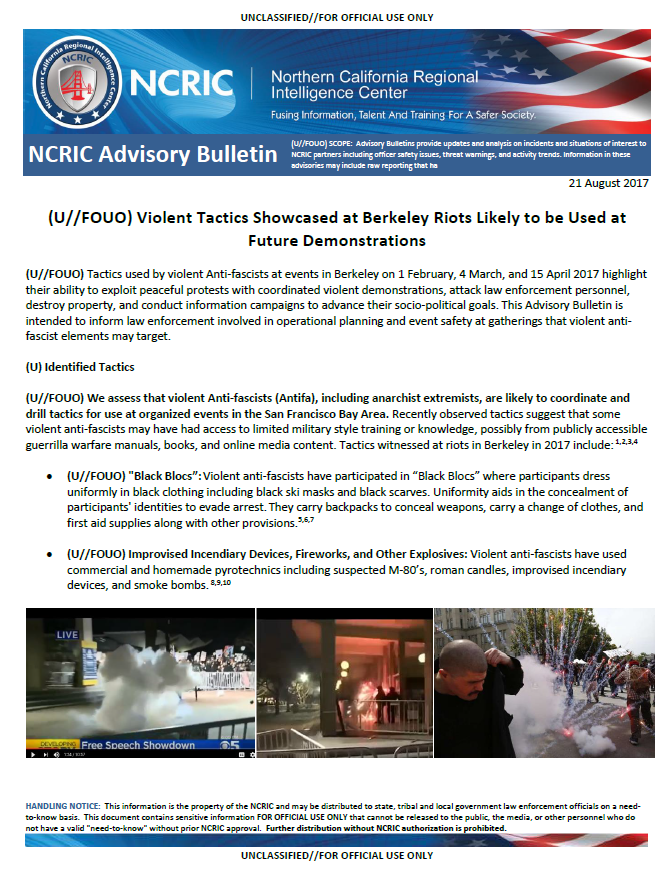 (U) Identified Tactics
(U//FOUO) We assess that violent Anti-fascists (Antifa), including anarchist extremists, are likely to coordinate and drill tactics for use at organized events in the San Francisco Bay Area. Recently observed tactics suggest that some violent anti-fascists may have had access to limited military style training or knowledge, possibly from publicly accessible guerrilla warfare manuals, books, and online media content. Tactics witnessed at riots in Berkeley in 2017 include:

•(U//FOUO) “Black Blocs”: Violent anti-fascists have participated in “Black Blocs” where participants dress uniformly in black clothing including black ski masks and black scarves. Uniformity aids in the concealment of participants’ identities to evade arrest. They carry backpacks to conceal weapons, carry a change of clothes, and first aid supplies along with other provisions.

•(U//FOUO) Element of Surprise: Violent anti-fascists have avoided early detection at some events by assembling off-site before moving to a given venue, taking responding authorities by surprise.

•(U//FOUO) Communication: Violent anti-fascists have used multiple, overlapping communication platforms including megaphones, phone apps such as Signal, rally markers such as flags, and command and response words to continue to coordinate their actions if one communication method is compromised or fails.