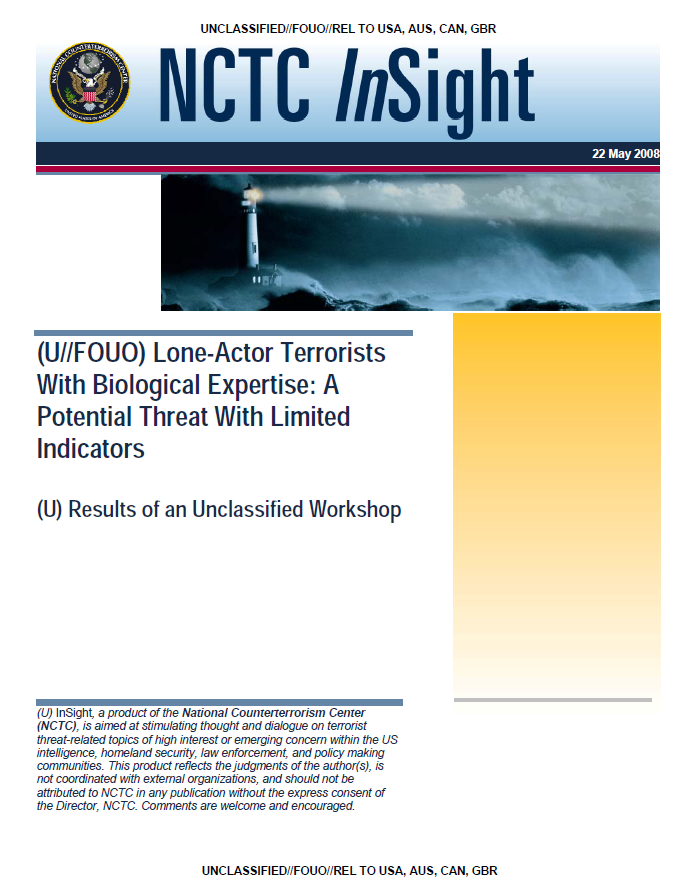 (U//FOUO) Elements of the U. S. government hosted an interdisciplinary, unclassified workshop to better understand the potential threat from independently acting terrorists with biological expertise. Such lone-actor terrorists have the potential to carry out high-impact biological attacks while generating few signatures, making detection or disruption of their efforts challenging. The one-day workshop explored the possible motivations, intents, and objectives of lone-actor terrorists who might consider conducting biological attacks; examined scientific infrastructure vulnerabilities that these individuals could exploit; and identified strategies to mitigate this potential threat.

● Panelists with backgrounds in academia, law enforcement, and elsewhere, including professionals in psychology and psychiatry, former government officials, a biologist, and a security expert participated in the workshop. Prior to the workshop, the panelists received an unclassified threat briefing and wrote position papers to help focus the discussion.

(U//FOUO) At the end of the workshop, the panelists and other attendees reviewed the day’s discussion and identified key findings, themes, and gaps. This paper, which is not necessarily representative of the U. S. Intelligence Community’s views, discusses some of the more interesting conclusions and their implications.

● Panelists argued that introversion and other personality characteristics of lone-actor terrorists frequently also occur in scientists, raising concern that a lone-actor biological terrorist might emerge from the ranks of scientists with relevant expertise for such an attack. Common personality characteristics create challenges in identifying personality-based indicators of potential lone-actor biological terrorists that are not found frequently in the broader scientific community.

● A vulnerable individual usually requires a traumatic life event, or “trigger,” that pushes him into an act of loneactor terrorism, according to the panelists. The convergence of professional and personal stressors that limit an individual’s ability to cope may provide identifiable triggers that might indicate the potential for conducting a bioterrorist attack.

● Prospective lone-actor terrorists frequently self-identify as being part of formal, virtual, or imagined communities, and panelist discussion suggested that a lone-actor terrorist’s attempts to reach out to such communities might present detection opportunities for intelligence and law-enforcement personnel.

● Panelists identified physical and procedural protections on high-risk biological agents and facilities, along with outreach programs to raise awareness within the scientific community of the potential threat and needed counseling for troubled employees, as elements whose sustained implementation may help mitigate the potential biological lone-terrorist threat. 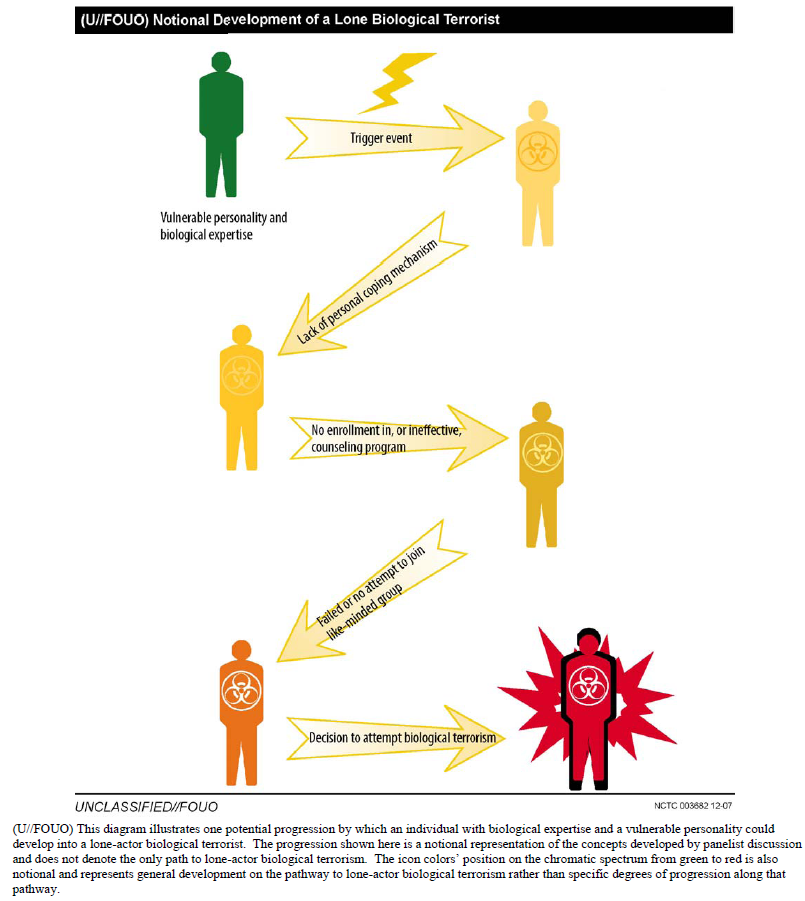 (U//FOUO) Outreach programs targeting the scientific community to raise awareness of the potential lone-actor biological terrorist threat will continue to be an important means of helping scientists recognize vulnerable colleagues or subordinates for referral to employee assistance programs, other counseling services, or law-enforcement investigation. The lack of clear indicators to distinguish at-risk scientists from their colleagues, however, would hinder peer recognition of potential lone-actor biological terrorists in the same way it encumbers identification by the law-enforcement and Intelligence Communities.

● Outreach programs provide scientists with greater awareness of the potential threat and of warning signs that a colleague or subordinate is at risk of crossing the threshold into terrorism. Introverted individuals may be less likely to identify at-risk colleagues, and awareness-raising outreach programs may be of particular importance for the scientific community.

● Nominations for counseling that such outreach programs generate are especially significant because the introversion of many potential lone-actor terrorists may make them reluctant to self-nominate for employee assistance or other programs. 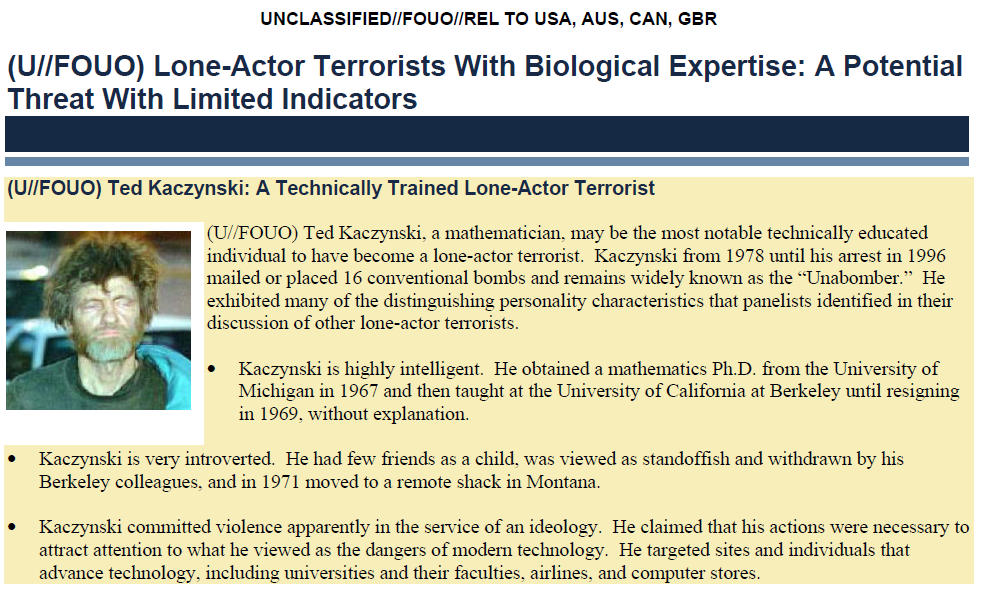