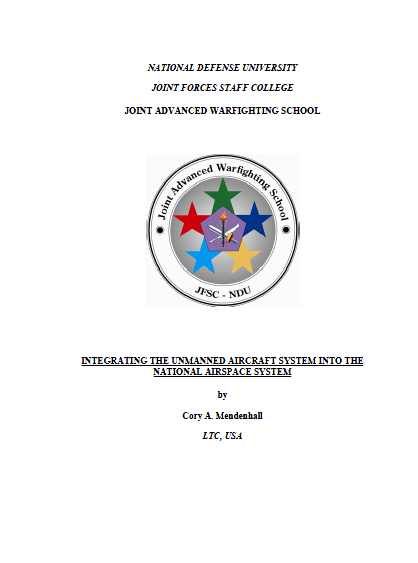 In the last 10 years, the unmanned aircraft system (UAS) has captured the public’s imagination and fascination with their ability to provide instantaneous video feeds of military and covert CIA operations in far away places like Afghanistan and Iraq.

The rapid proliferation of the UAS and the eventual redeployment of current systems deployed to Afghanistan and Iraq will require the Federal Aviation Administration (FAA) to provide unrestricted unmanned aircraft access within the National Airspace System (NAS). The Department of Defense (DoD) requires routine access to the NAS to execute directed missions, meet training requirements, and perform necessary testing to meet the Joint Force Commander’s (JFC’s) established mission priorities. Over the past several years, the DoD has been able to execute a small portion of UAS flights in the NAS but current rules and regulation do not facilitate seamless integration with manned aircraft.

Collision avoidance is, and always will be, an area of prominent concern for the FAA. Operating an aircraft in the NAS carries the same responsibilities as operating a car on the road. Collision avoidance is the primarily responsibility of the pilot or driver of the vehicle. Because the pilot of a UAS isn’t co-located with the aircraft, collision avoidance is severely limited compared to manned flight. A pilot’s use of sight is the best means to deter potential collisions in the air. As an alternative to sight, many manned aircraft are equipped with sense and avoid (SAA) technology that can provide early warning to pilots of potential collisions in the air with other aircraft.

Currently, the FAA does not recognize UAS operating in the NAS as having SAA capability. Integration of UAS into non-segregated airspace has been hindered by the systems inability to comply with Title 14 CFR Part 91.111 and 91.113. Both documents require that, whether filed under instrument flight rules (IFR) or visual flight rules (VFR), “vigilance shall be maintained by each person operating an aircraft so as to see and avoid other aircraft.” The ability to sense and avoid other aircraft is paramount for the safety of all participating and non-participating aircraft. The Army and the Air Force argue that “the purpose of the this regulation is to avoid mid-air-collisions, therefore the focus should be on technological efforts to address issues as it relates to UAS rather than trying to mimic and/or duplicate human vision.”

Recognizing the importance of developing common autonomous SAA capability for unmanned aircraft, DoD created an Airspace Integration (AI) Integrated Product Team (IPT) within the UAS Task Force to focus on and coordinate airspace integration efforts. The AI IPT identified SAA capabilities necessary to gain NAS access through special rules and policy, new procedures, and use of ground/air based sensor technology. Although the AI IPT is continuing to work solutions for UAS to access the NAS, there is still no accepted standard between the FAA and DoD for UAS sense and avoid equipment.

Looking for alternate means of compliance to the FAA’s SAA requirements, the Army’s UAS Project Office (PO) has established the Unmanned Systems Airspace Integration Concepts Product Directorate (USAIC PD) for the specific purpose of developing, testing, fielding, and sustaining a ground-based sense and avoid (GBSAA) program. The GBSAA would give UAS operators a SAA capability, allowing them an alternate means of compliance with 14 CFR Part 91.113.

The Air Force and Navy are the lead services pursuing an air-based sense and avoid (ABSAA) solution that will integrate with the GBSAA. Initially, the system will leverage Group 5 UAS capabilities, like the RQ-4B and BAMS, and will be expanded to include Groups 3-4. Efforts are focused on developing the capability to perform both self-separation and collision avoidance onboard unmanned aircraft to ensure an appropriate level of safety.

The further development of both systems will require the need to assess equipage and procedure that are necessary to integrate into FAA’s Next Generation Air Transportation System (NextGen) discussed further in surveillance systems.

UAS rely on communication signals in the form of bi-directional frequencies to enable flight commands from ground control stations. These communications signals use electromagnetic radiation in the form of invisible waves of energy to transmit data. The rate per second at which these waves of energy cycle is the signal’s frequency. Changes in the length of the wave across the spectrum of frequency, from short to long, causes a band of frequencies. Each band of frequency has a unique characteristic as it travels through the atmosphere. The range of frequencies occupied by a given wave or the amount of data capable of transmission in a given amount of time is referred to as bandwidth.

The DoD and FAA are addressing the challenges of radio frequency allocation for UAS operations, but solving this challenge may not be completed for several years. The International Telecommunication Union allocates radio frequency spectrum and to obtain spectrum allocation for UAS, the FAA must coordinate with the Department of Commerce (DoC) and Federal Communications Commission (FCC). Both the DoC and the FCC will meet in spring 2011 to discuss implementation and management of spectrum allocation. At this meeting, federal and non-federal use of the frequency spectrum must be allocated to balance requirement and support safe operations. This will become increasingly difficult as military units return from deployment and UAS gain unrestricted access to the NAS.