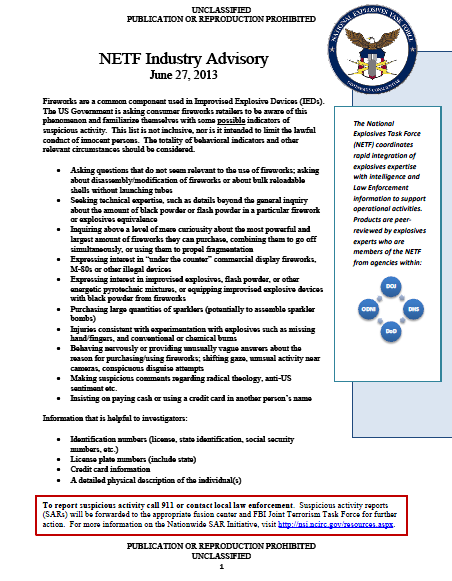 Fireworks are a common component used in Improvised Explosive Devices (IEDs). The US Government is asking consumer fireworks retailers to be aware of this phenomenon and familiarize themselves with some possible indicators of suspicious activity. This list is not inclusive, nor is it intended to limit the lawful conduct of innocent persons. The totality of behavioral indicators and other relevant circumstances should be considered.

• Asking questions that do not seem relevant to the use of fireworks; asking about disassembly/modification of fireworks or about bulk reloadable shells without launching tubes
• Seeking technical expertise, such as details beyond the general inquiry about the amount of black powder or flash powder in a particular firework or explosives equivalence
• Inquiring above a level of mere curiousity about the most powerful and largest amount of fireworks they can purchase, combining them to go off simultaneously, or using them to propel fragmentation
• Expressing interest in “under the counter” commercial display fireworks, M-80s or other illegal devices
• Expressing interest in improvised explosives, flash powder, or other energetic pyrotechnic mixtures, or equipping improvised explosive devices with black powder from fireworks
• Purchasing large quantities of sparklers (potentially to assemble sparkler bombs)
• Injuries consistent with experimentation with explosives such as missing hand/fingers, and conventional or chemical burns
• Behaving nervously or providing unusually vague answers about the reason for purchasing/using fireworks; shifting gaze, unusual activity near cameras, conspicuous disguise attempts
• Making suspicious comments regarding radical theology, anti-US sentiment etc.
• Insisting on paying cash or using a credit card in another person’s name

Information that is helpful to investigators: