The following report was mandated by the National Defense Authorization Act (NDAA) for Fiscal Year 2014, Section 933 “Mission Analysis for Cyber Operations of the Department of Defense (DoD).” The document was obtained from the website of the National Guard Association of the United States. 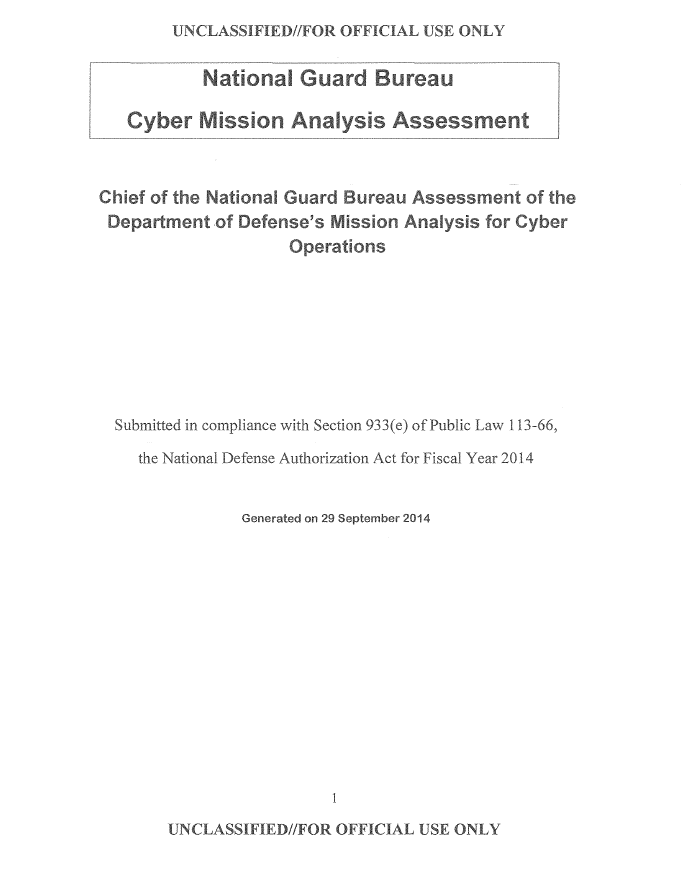 The CNGB appreciates the opportunity to provide the “National Guard Assessment” required by Section 933(e) of the NDAA. The CNGB commends the Office of the Deputy Assistant Secretary of Defense for Cyber Policy for its openness, transparency, and inclusiveness in developing the report. Its collaborative approach resulted in the most comprehensive study to date of Reserve Component integration into the Cyber mission. To complete this independent assessment of the Secretary of Defense’s Mission Analysis for Cyber Operations of the Department of Defense report, the National Guard Bureau (NGB) consulted with key stakeholders to ensure an equally transparent review. The NGB solicited input from the Director of the Army National Guard (DARNG), Army Cyber Command (ARCYBER), the Director of the Air National Guard (DANG), Air Force Cyber Command (AFCYBER), United States Cyber Command (USCYBERCOM), the National Guard Cyber General Officer Advisory Council, The Adjutants General (TAG) of the States and Territories, the Council of Governors, and the Office of the Secretary of Defense. The input received in these engagements is reflected throughout this report.

National Guard Assessment: The CNGB concurs with the Department’s finding that training and equipping the cyberspace Total Force likely will require additional capabilities. As discussed in the DoD’s report, USCYBERCOM has heavily relied upon Intelligence Community (IC) training and platforms to conduct operations. The DOD made a number of strategic decisions to invest in training and infrastructure to support the CMF.

The CNGB affirms training received from other sources, such as the ARNG Professional Education Center (PEC) and the ANG Regional Training Institute, must be considered when building the appropriate equivalency training packages to conform to the DOD joint  training standard.