The following study of the effects of the Federal Assault Weapons Ban on gun violence was conducted by researchers at the University of Pennsylvania in 2004 for the National Institute of Justice, United States Department of Justice. 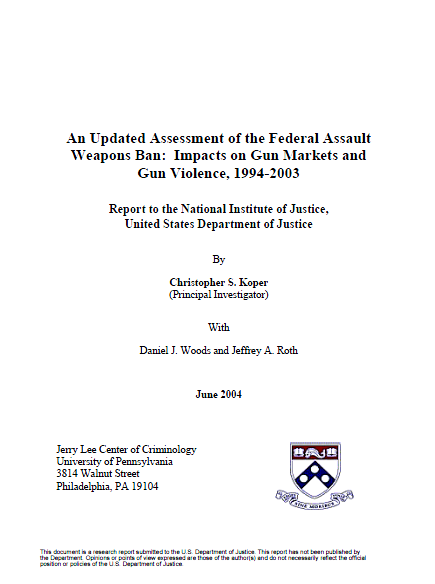 An Updated Assessment of the Federal Assault Weapons Ban: Impacts on Gun Markets and Gun Violence, 1994-2003

• Title XI, Subtitle A of the Violent Crime Control and Law Enforcement Act of 1994 imposed a 10-year ban on the “manufacture, transfer, and possession” of certain semiautomatic firearms designated as assault weapons (AWs). The ban is directed at semiautomatic firearms having features that appear useful in military and criminal applications but unnecessary in shooting sports or self-defense (examples include flash hiders, folding rifle stocks, and threaded barrels for attaching silencers). The law bans 18 models and variations by name, as well as revolving cylinder shotguns. It also has a “features test” provision banning other semiautomatics having two or more military-style features. In sum, the Bureau of Alcohol, Tobacco, Firearms, and Explosives (ATF) has identified 118 models and variations that are prohibited by the law. A number of the banned guns are foreign semiautomatic rifles that have been banned from importation into the U.S. since 1989.
• The ban also prohibits most ammunition feeding devices holding more than 10 rounds of ammunition (referred to as large capacity magazines, or LCMs). An LCM is arguably the most functionally important feature of most AWs, many of which have magazines holding 30 or more rounds. The LCM ban’s reach is broader than that of the AW ban because many non-banned semiautomatics accept LCMs. Approximately 18% of civilian-owned firearms and 21% of civilian-owned handguns were equipped with LCMs as of 1994.
• The ban exempts AWs and LCMs manufactured before September 13, 1994. At that time, there were upwards of 1.5 million privately owned AWs in the U.S. and nearly 25 million guns equipped with LCMs. Gun industry sources estimated that there were 25 million pre-ban LCMs available in the U.S. as of 1995. An additional 4.7 million pre-ban LCMs were imported into the country from 1995 through 2000, with the largest number in 1999.
• Arguably, the AW-LCM ban is intended to reduce gunshot victimizations by limiting the national stock of semiautomatic firearms with large ammunition capacities – which enable shooters to discharge many shots rapidly – and other features conducive to criminal uses. The AW provision targets a relatively small number of weapons based on features that have little to do with the weapons’ operation, and removing those features is sufficient to make the weapons legal. The LCM provision limits the ammunition capacity of non-banned firearms.

• Following implementation of the ban, the share of gun crimes involving AWs declined by 17% to 72% across the localities examined for this study (Baltimore, Miami, Milwaukee, Boston, St. Louis, and Anchorage), based on data covering all or portions of the 1995-2003 post-ban period. This is consistent with patterns found in national data on guns recovered by police and reported to ATF.
• The decline in the use of AWs has been due primarily to a reduction in the use of assault pistols (APs), which are used in crime more commonly than assault rifles (ARs). There has not been a clear decline in the use of ARs, though assessments are complicated by the rarity of crimes with these weapons and by substitution of post-ban rifles that are very similar to the banned AR models.
• However, the decline in AW use was offset throughout at least the late 1990s by steady or rising use of other guns equipped with LCMs in jurisdictions studied (Baltimore, Milwaukee, Louisville, and Anchorage). The failure to reduce LCM use has likely been due to the immense stock of exempted pre-ban magazines, which has been enhanced by recent imports.

• Because the ban has not yet reduced the use of LCMs in crime, we cannot clearly credit the ban with any of the nation’s recent drop in gun violence. However, the ban’s exemption of millions of pre-ban AWs and LCMs ensured that the effects of the law would occur only gradually. Those effects are still unfolding and may not be fully felt for several years into the future, particularly if foreign, pre-ban LCMs continue to be imported into the U.S. in large numbers.

The Ban’s Reauthorization or Expiration Could Affect Gunshot Victimizations, But Predictions are Tenuous

• Should it be renewed, the ban’s effects on gun violence are likely to be small at best and perhaps too small for reliable measurement. AWs were rarely used in gun crimes even before the ban. LCMs are involved in a more substantial share of gun crimes, but it is not clear how often the outcomes of gun attacks depend on the ability of offenders to fire more than ten shots (the current magazine capacity limit) without reloading.
• Nonetheless, reducing criminal use of AWs and especially LCMs could have nontrivial effects on gunshot victimizations. The few available studies suggest that attacks with semiautomatics – including AWs and other semiautomatics equipped with LCMs – result in more shots fired, more persons hit, and more wounds inflicted per victim than do attacks with other firearms. Further, a study of handgun attacks in one city found that 3% of the gunfire incidents resulted in more than 10 shots fired, and those attacks produced almost 5% of the gunshot victims.
• Restricting the flow of LCMs into the country from abroad may be necessary to achieve desired effects from the ban, particularly in the near future. Whether mandating further design changes in the outward features of semiautomatic weapons (such as removing all military-style features) will produce measurable benefits beyond those of restricting ammunition capacity is unknown. Past experience also suggests that Congressional discussion of broadening the AW ban to new models or features would raise prices and production of the weapons under discussion.
• If the ban is lifted, gun and magazine manufacturers may reintroduce AW models and LCMs, perhaps in substantial numbers. In addition, pre-ban AWs may lose value and novelty, prompting some of their owners to sell them in undocumented secondhand markets where they can more easily reach high-risk users, such as criminals, terrorists, and other potential mass murderers. Any resulting increase in crimes with AWs and LCMs might increase gunshot victimizations for the reasons noted above, though this effect could be difficult to measure. 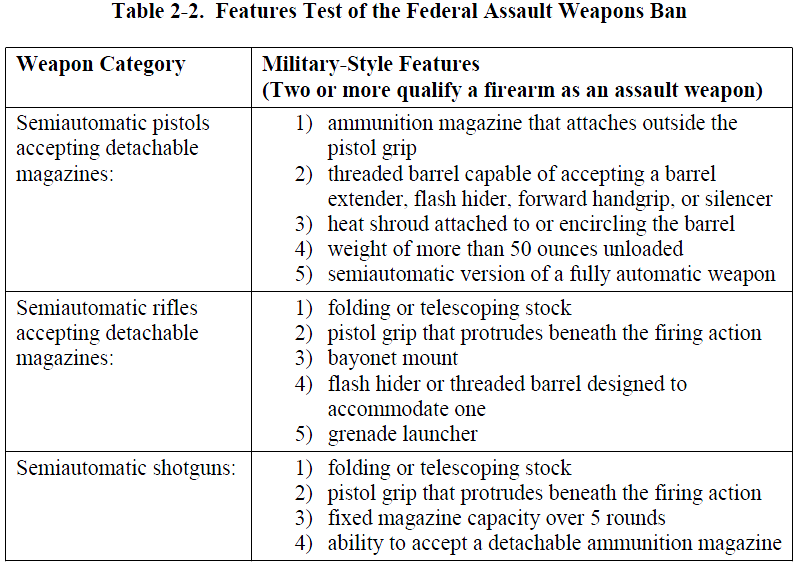 3.1. Criminal Use of Assault Weapons

Numerous studies have examined the use of AWs in crime prior to the federal ban. The definition of AWs varied across the studies and did not always correspond exactly to that of the 1994 law (in part because a number of the studies were done prior to 1994). In general, however, the studies appeared to focus on various semiautomatics with detachable magazines and military-style features. According to these accounts, AWs typically accounted for up to 8% of guns used in crime, depending on the specific AW definition and data source used (e.g., see Beck et al., 1993; Hargarten et al., 1996; Hutson et al., 1994; 1995; McGonigal et al., 1993; New York State Division of Criminal Justice Services, 1994; Roth and Koper, 1997, Chapters 2, 5, 6; Zawitz, 1995). A compilation of 38 sources indicated that AWs accounted for 2% of crime guns on average (Kleck, 1997, pp.112, 141-143).

Similarly, the most common AWs prohibited by the 1994 federal ban accounted for between 1% and 6% of guns used in crime according to most of several national and local data sources examined for this and our prior study (see Chapter 6 and Roth and Koper, 1997, Chapters 5, 6): 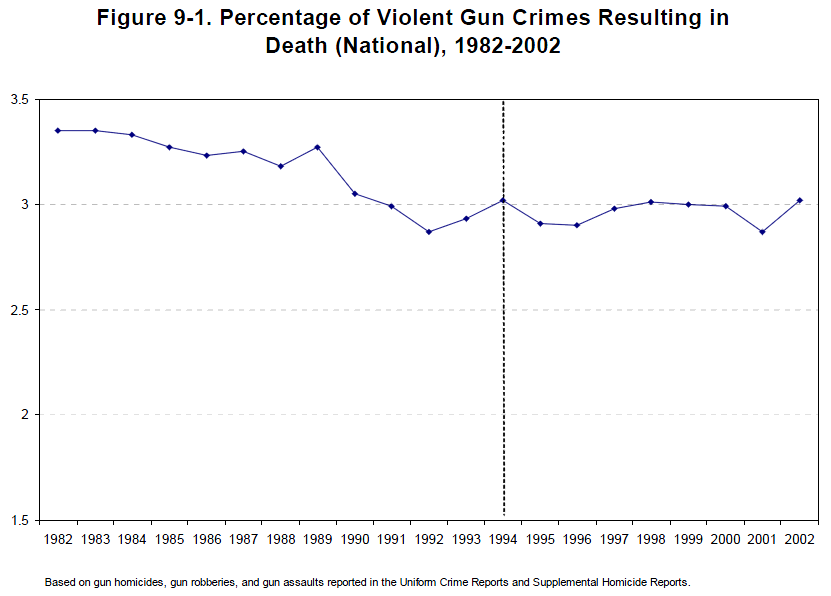