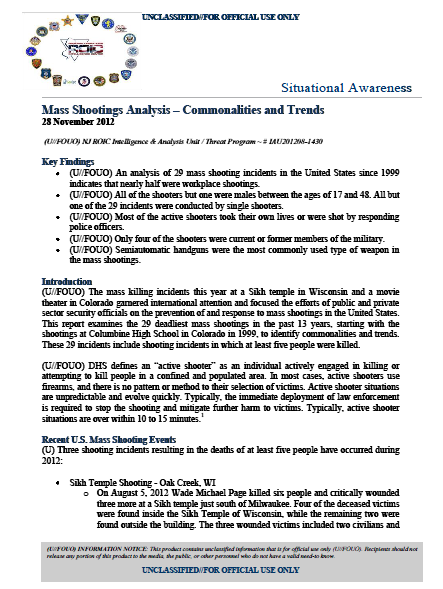 (U//FOUO) The mass killing incidents this year at a Sikh temple in Wisconsin and a movie theater in Colorado garnered international attention and focused the efforts of public and private sector security officials on the prevention of and response to mass shootings in the United States. This report examines the 29 deadliest mass shootings in the past 13 years, starting with the shootings at Columbine High School in Colorado in 1999, to identify commonalities and trends. These 29 incidents include shooting incidents in which at least five people were killed.

(U//FOUO) DHS defines an “active shooter” as an individual actively engaged in killing or attempting to kill people in a confined and populated area. In most cases, active shooters use firearms, and there is no pattern or method to their selection of victims. Active shooter situations are unpredictable and evolve quickly. Typically, the immediate deployment of law enforcement is required to stop the shooting and mitigate further harm to victims. Typically, active shooter situations are over within 10 to 15 minutes. 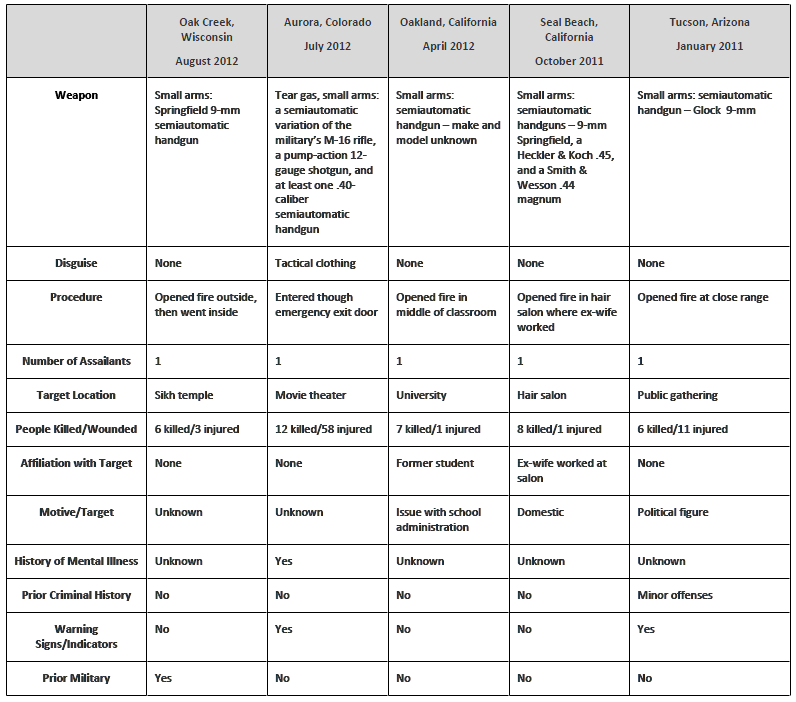 Analysis of Mass Shootings Since 1999

(U//FOUO) The 29 mass shootings incidents since 1999 – listed in Appendix 1 – were analyzed to identify commonalities and trends. These include the following:

Active Shooters: How to Respond

(U//FOUO) Following the tragedy that occurred at Virginia Tech in 2007, the U.S. Department of Homeland Security released a document with recommendations on what to do in the event of an active shooter situation. The most critical recommendation is for both law enforcement and the private sector to have training and conduct drills in order to be prepared for an active shooter incident.

(U//FOUO) In many of the case studies discussed, there were indicators of potential violence. The following is a list of warning signs that an employee may exhibit in the workplace: